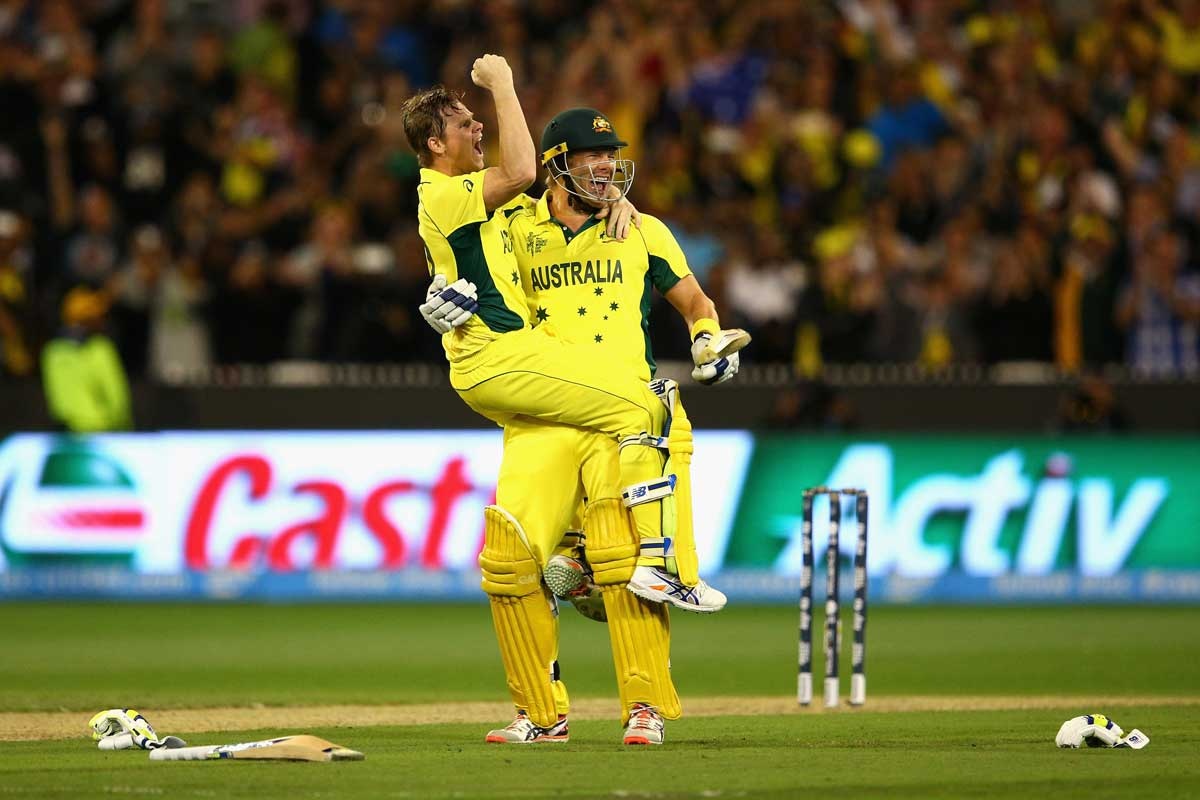 Too deep. Too professional. Too cool. Too quick. Too talented.

Australia went into the ICC World Cup with the best team and came out six long weeks later with the trophy, which of course, is not always a guarantee for the top-ranked group.

The final itself was anti-climactic but only because of Australian excellence and New Zealand’s failure to meet the demands of cricket’s most stringent technical audit. The Kiwis dreamed big but fluffed their lines, right from the captain Brendon McCullum down, with one or two exceptions.

It is a trait of Australian cricket teams that they can ruin World Cup finals; they did the same to Pakistan at Lord’s in 1999 and to India at the Wanderers in 2003, arguably to Sri Lanka in Bridgetown in 2007 too, along the way to five World Cup wins, by a stretch the best record of any cricket nation.

The maverick McCullum, one of the most destructive strikers in the world, swung and missed at the first three balls he faced from Mitchell Starc in the very first over of the match at the MCG. The first two sailed through to Brad Haddin at breakneck speed; the third was a thunderclap for the contest, swinging in to hit off stump halfway up as the Kiwi skipper was completing his shot.

Starc had set the standard for Australia and McCullum had a duck. New Zealand would never recover from that dreadful point. While McCullum is a joy to watch and he employs an aggressive method as a matter of course, some prudence was missing here in the first over of a final against a bowler of Starc’s ilk.

A rapturous MCG crowd of 93,013, the best-ever at a day’s cricket in Australia and unofficially a world record (since they don’t make an official count in India, where there surely have been bigger attendances) was short-changed by the final, which never matched the occasion in terms of a contest.

But this is the way of big-time sport, which asks teams to execute under acute pressure and often finds failure. Everything went wrong for the previously-unbeaten New Zealand including the veteran Daniel Vettori breaking down in his last game for his country. By contrast under the blowtorch, Australia was ruthless, calm and skilled.

Bowling first on a dry strip, not a single man overstepped the front line and only a handful of wides were delivered; not a catch hit the turf. Michael Clarke’s captaincy was superb in his final one-day international, so that everyone was on song.

New Zealand’s innings had three phases: a stumble to 3/39 under Starc’s left-arm examination, a recovery led by the impressive Grant Elliott and Ross Taylor where a 250 total seemed possible, then a catastrophic fall inspired by James Faulkner.

From 3-150, the Kiwis lost 7-33 in 10 overs to post 183, probably 100 short of what would be regarded a competitive score. The left-arm pace trio of Starc, Faulkner and Mitchell Johnson garnered eight wickets between them, but a handful of the New Zealand batsmen fell to poorly-conceived shots. Only Elliott’s 83 from 82 balls stood up to scrutiny.

Australia had just two momentary wobbles: when Aaron Finch was dismissed by Trent Boult in the second over, and when David Warner’s blazing 45 came to an end. The captain-in-waiting, Steve Smith, breezed in unbothered by a hint of pressure and peeled off another unbeaten 50, while Clarke himself played beautifully for 74 (72 balls) until he dragged Matt Henry on to his stumps late. By that time, Australia’s win was a formality.

Perhaps fittingly, a baton was passed as Smith hit the winning runs, a pull for four off Henry. Such is his current dominance that when he played Henry on to his stumps at 16, the bails had remained intact.

At the moment the Sydney batsman raised his arms in triumph and the white ball trickled over the rope at deep square leg, there were a whopping 16.5 overs remaining and batsmen and hitters of the quality of Glenn Maxwell, Brad Haddin and Faulkner still in the dressing room.

The Kiwis were great all through the tournament but poor at the end.

The Australians built into the six weeks and conjured their best at the end, notably through Starc, whose outrageous return of 22 wickets at 10.18 earned him the player of the tournament gong. It was the arrival of a seriously good player; Shane Warne can claim credit for having fired up the lefty with his criticism earlier in the season.

Smith was magnificent and he has made the appointment of a new captain easy for Cricket Australia. Clarke will continue to play Test cricket for a while yet, and perhaps might consider stepping aside for the younger man and acting as a mentor. It is worth the authorities pondering.

As for the tournament, it was too long, but had some wonderful moments. Many of them were brought to us by the associate nations, yet the ICC wants to rid them next time around in England. We can only hope sanity prevails.

More than one million people watched the 49 games proving that 50-over cricket has a future so long as there is meaning to the contest. And the final stanza was plainly written, and familiar to the cricket world: Australia is the king again.