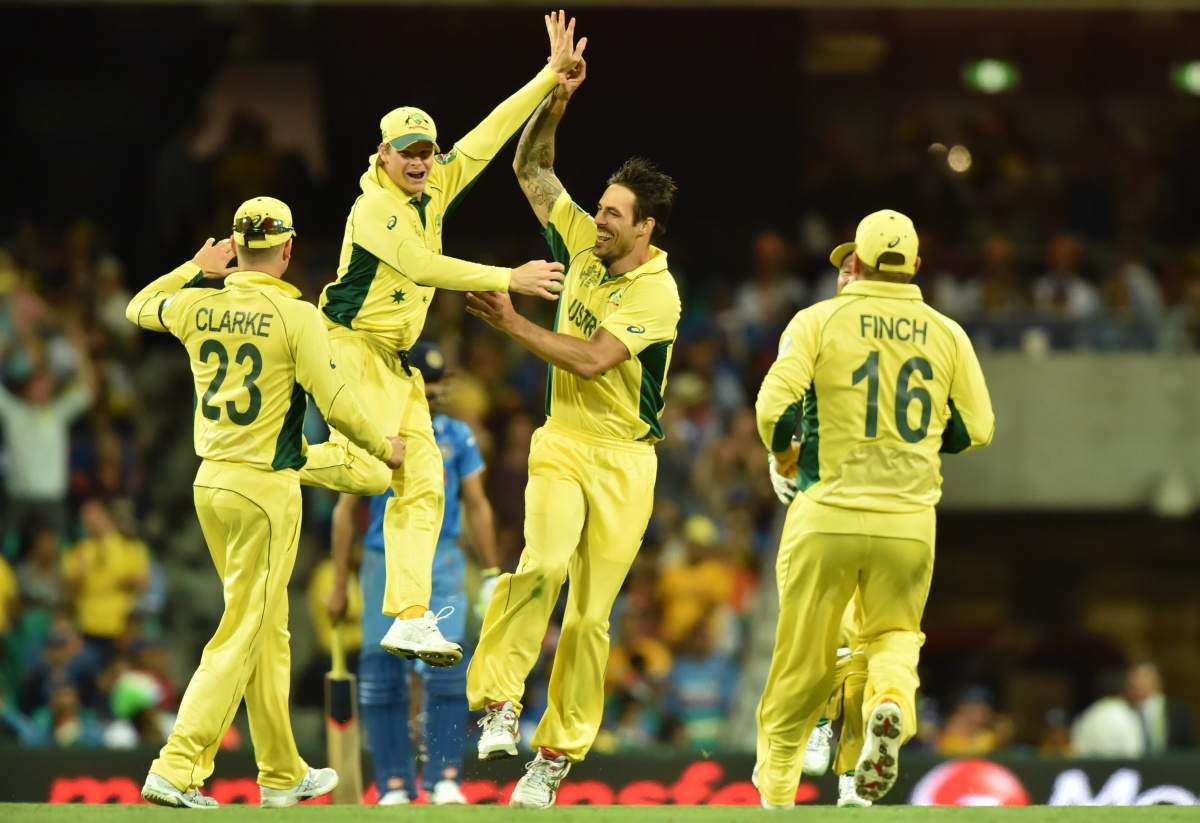 Steve Smith set it up and Mitchell Johnson knocked them over at the SCG, where Australia crushed India by 95 runs to reach Sunday’s Cricket World Cup final against New Zealand.

Smith’s career-best one-day international score of 105 lifted the tournament co-hosts to a total of 7-328 on a dry pitch.

They looked to be on track for a lot more during Smith and Aaron Finch’s 182-run partnership, but Umesh Yadav spearheaded a sterling Indian fightback in Thursday’s semi-final.

No side has reeled in a target above 300 in a World Cup knockout fixture.

The defending champions would have felt bullish about their chances of making history after racing to 0-73 after 12 overs.

Instead, Johnson busted the game open with the scalps of Virat Kohli and Rohit Sharma, reducing India to 3-91.

India never recovered and were eventually rolled for 233 in the 47th over, with Smith and Glenn Maxwell’s direct-hit run-outs helping tee up a trans-Tasman title decider at the MCG.

“We felt 330 was about par, but we had to bowl and field well,” man of the match Smith said.

“The boys did a terrific job. Bring on Melbourne … it’s going to be an amazing moment. Hopefully, we can put on a show for everyone.”

Earlier on Thursday, Michael Clarke couldn’t get the words “we’ll have a bat” out quick enough.

For the umpteenth time in a marathon summer of cricket, Smith dominated India’s bowlers with a combination of fancy footwork and terrific timing.

From the moment Smith was able to get off the mark – taking off for a single like his life depended on it and scampering back for a second – he looked like a man on a mission.

It was in Sydney that Smith capped an astonishing Test series against India, boosting his series tally to 769 runs and breaking all manner of records.

The 25-year-old picked up where left off.

Smith’s half-century came off 52 deliveries, while he needed just 89 balls to reach three figures and make a mockery of an Indian attack that had banked a total of 70 wickets from seven wins during the tournament.

Finch wasn’t quite as convincing early in his knock of 81, however the opener’s confidence grew with every delivery.

The hosts strolled to 1-197 after 34 overs before Yadav removed Smith and Finch with short balls.

It triggered a collapse of 4-51, but Johnson smacked 27 runs off 13 balls to push Australia’s total well beyond 300.

Both sides were nervy after the innings break.

Sharma offered an edge in the opening over, but replays proved inconclusive as to whether it carried to Shane Watson at first slip.

Shikhar Dhawan was dropped on five by Brad Haddin, who dived in front of Watson and managed to get two hands to the ball.

Dhawan and Sharma were in dashing touch, but the former’s dismissal on 45 signalled the beginning of the end.

MS Dhoni, who was dropped on 42 by Clarke, top-scored with 63 and pushed his side to a point where they needed 109 off the final 46 balls.

The equation never became any easier.

“A lot of people didn’t think we would come this far in the World Cup but, when you reach the knockout stage, you have to lift,” Dhoni said.