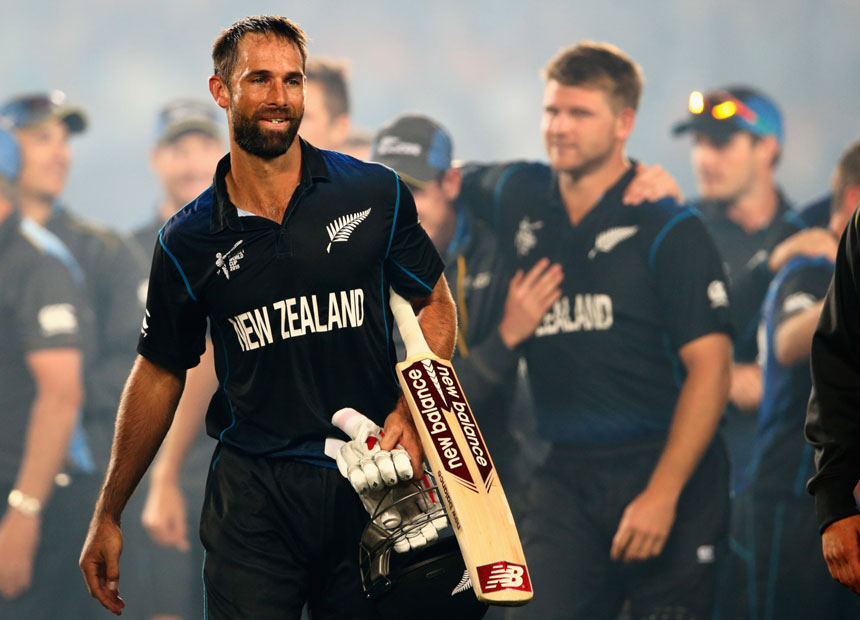 New Zealand booked their spot in the cricket World Cup final after Grant Elliott closed out victory over South Africa with a six off the penultimate ball.

Elliott’s decisive blow against the country of his birth gave New Zealand a four-wicket win in Auckland on Tuesday.

Set a challenging target of 298 in a semi-final reduced by rain to 43 overs a side, the Black Caps got a blazing start from skipper Brendon McCullum.

Elliott and Corey Anderson then combined for a fifth-wicket century partnership to keep the home side in with a chance.

Anderson had a huge reprieve on 33, when well short of his ground, but Proteas skipper AB de Villiers lost the ball in trying to effect a run-out.

Elliott had a life with seven balls to go as JP Duminy and substitute fielder Farhaan Behardien collided when going for a catch.

That left the equation at 12 needed from the final over.

A Daniel Vettori boundary through third man and then a single made it five from two balls, before Elliott lofted the ball over the long-on boundary to finish unbeaten on 84, with New Zealand on 6-299.

McCullum got the chase off to a rollicking start when he smacked the third ball he faced over the rope beyond extra cover.

The opener continued his assault, taking 24 off one Dale Steyn over with shots around the ground.

But Steyn had a role in removing McCullum, taking the catch at mid-on off Morne Morkel.

McCullum’s quick-fire 59 came off 26 balls, 12 of which went for boundaries, including four sixes.

Opener Martin Guptill followed his World Cup record knock of 237 not out by going past 500 runs for the tournament.

But after he was run out for 34 and Ross Taylor departed for 30, the Proteas appeared in the driving seat at 4-149.

New Zealand have now reached the final for the first time after seven semi-final appearances.

They will meet either defending champions India or four-time winners Australia in Melbourne on Sunday.

The Duckworth-Lewis method came into play after South Africa’s innings was disrupted by a two-hour rain delay.

When the players came back out, the Proteas smashed 65 runs from their remaining five overs to end on 5-281.

It was big-hitting David Miller who pumped the accelerator in the closing stages.

Miller smacked 49 from 18 balls, before being caught behind going for another big hit.

Before the wet weather arrived, de Villiers and Faf du Plessis had set South Africa towards a big total after upping the tempo and taking their stand past 100.

De Villiers, who ended unbeaten on 65, had a life on 38 when he thrashed an Anderson delivery to cover, but Williamson couldn’t hold on to the chance.

He responded to the let-off by hitting the next three balls of the over for a six and two fours to bring up a 32-ball half-century.

Du Plessis fell for 82 to the first delivery he faced after the resumption, caught behind off Anderson, who was expensive but ended with three wickets.

Seamer Trent Boult, the tournament’s top wicket-taker, claimed both scalps to take his tournament tally to 21.