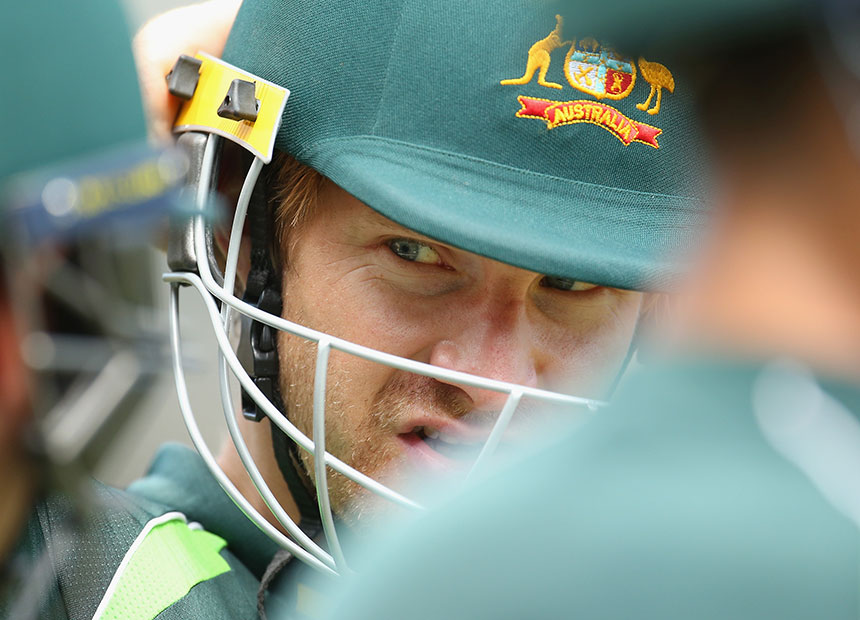 David Warner will play the Boxing Day Test and Shane Watson should too.

But far more grievous matters remain at the forefront of their minds.

• Boxing Day: five of the most memorable Tests
• I’m bowling faster than ever, says Patrick Cummins

Warner on Wednesday batted for the first time since hurting his thumb in the second Test win over India at the Gabba last week.

Watson also took part in the Christmas Eve session at the MCG, a day after being dazed by a bouncer that struck his helmet.

The hit was a confronting moment for the entire squad, especially the likes of Watson and Warner who were in the field when Phillip Hughes was fatally injured by a bouncer.

“It probably shook him (Watson) up a lot more than he would have anticipated,” Warner said.

“He was close to Hughesy. It brought back a bit of a memory for him and he got back on the horse and trained again today which was fantastic.”

Warner suggested Hughes’ death is never far from his thoughts.

“It’s going to be in the back of my mind every time I play,” he said.

“Every time I sit at home and I’m thinking about nothing but that.

Warner did just that at the MCG, starting with some throwdowns from batting coach Michael Di Venuto.

The aggressive opener was somewhat apprehensive early, immediately pulling his left hand off the bat after the first few strokes.

But Warner soon found his rhythm, driving and hooking with few signs of discomfort and then facing Nathan Lyon and some net bowlers.

The 28-year-old declared he would be ready for the third Test, and that middling the ball would be the best form of pain management.

“I tried to have a dip at the spinners to see if I could actually hit the ball as hard as I can and it did feel real sore,” Warner said.

“I had to try and grind it out and get through that pain and I was able to do that.

“When the ball hits the splice I found out today it’s going to be quite painful, but I can bear that pain.”

Warner will wear a finger splint and expects to be shifted to mid-off while fielding.

Watson started the session with a bowling machine in the indoor nets, then faced some medium-pacers in the outdoor nets.

“He practiced as well as I’ve seen him hit the ball,” Warner said. “He looked great.”

As did Ryan Harris, who proved his fitness bowling in tandem with Mitchell Johnson and Josh Hazlewood.

Shaun Marsh was struck on his left hand by a rising delivery from Josh Hazlewood on Wednesday.

Marsh headed to the rooms for further assessment, but returned to the nets for some throwdowns.

“You go 12 months without someone getting hit in the nets and then all of a sudden you have three or four in the one net session, and that’s cricket,” Warner said.

Shaken and stirred, but Watson and Warner to play