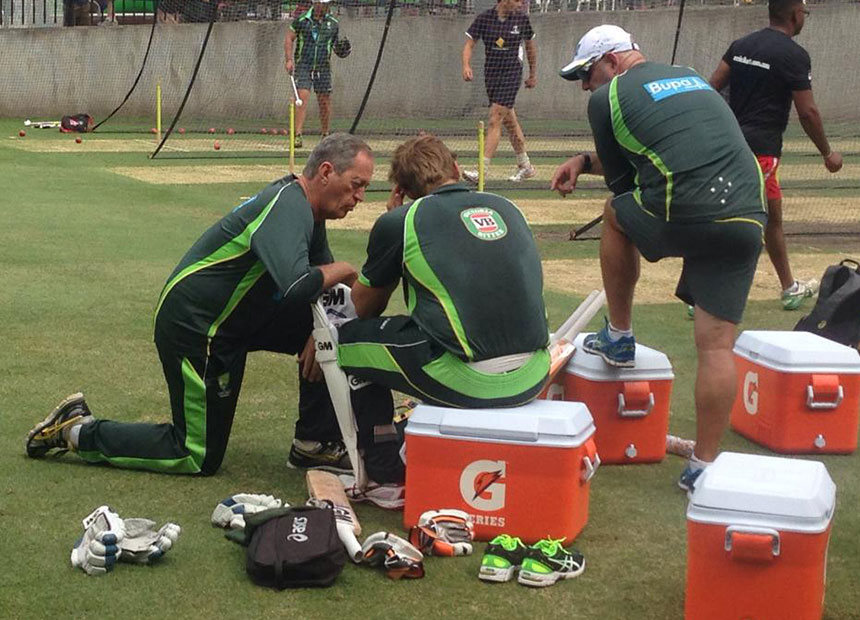 Shane Watson remains a likely Boxing Day Test selection, despite feeling off colour after being hit on the helmet at training.

Australian team medical staff are keeping an eye on Watson after a short-pitched ball from James Pattinson struck him during Tuesday morning’s net session.

“He was pretty much OK to start off with then he felt a little bit off colour back in his hotel room,” Waugh said while commentating for Channel 10 on Tuesday night’s Big Bash League game.

“So I believe he’s going to have a few tests overnight and we’ll see how he comes up in the morning.

“Hopefully he should be OK to play in the Test match.”

Australian team staff are confident Watson is fine, but he is being monitored for signs of concussion as a standard precaution.

“There might be no need to add anyone hopefully that’s the case but depending on what the doctors say, we’ll go from there,” Waugh said.

Watson was left dazed after the bouncer hit him flush on the helmet.

He briefly fell to his knees from the impact, then immediately left the nets and was seen by the team doctor before leaving the MCG session.

The allrounder soon returned to the team hotel, rather than attend a fan family day outside the ground.

It is less than a month since Phillip Hughes was felled by a bouncer during a Sheffield Shield match and died in hospital two days later.

Vice-captain Brad Haddin said soon after training that Watson was not hurt.

Hughes’ death has heightened sensitivity around batsmen being struck to the head, but Haddin did not want to read anything into this incident.

“It’s just getting hit in the head – he’s just a bit shaken,” he said.

“He’s shaken as anyone would be.

Watson to be monitored ahead of Boxing Day