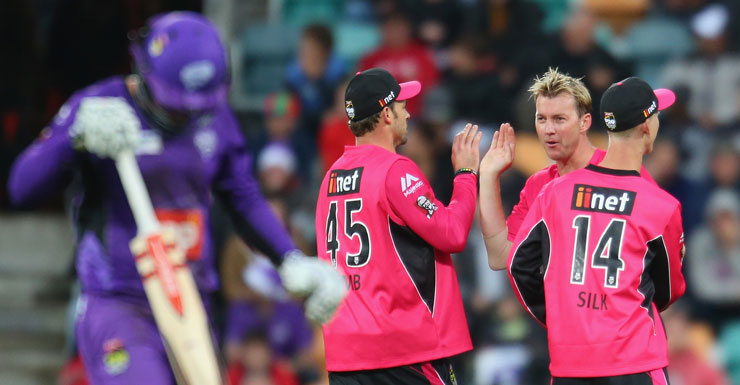 A flying start to their innings allowed the Sydney Sixers to cruise to victory over the Hobart Hurricanes in the Big Bash League at Bellerive Oval.

The Sixers chased down the target score of 155 for the loss of three wickets with five balls to spare.

Some heavy hitting from Nic Maddinson (29 from 12) and Michael Lumb (44 from 31) set a strong foundation for the Sixers’ innings, while Riki Wessels showed glimpses of his ability on the way to 22.

Jordan Silk (31 not out) and Moises Henriques (25 not out) comfortably steered the ship home to give the Sixers their second win from as many matches.

Rain delayed the start of the match, meaning each team only faced 19 overs.

Bailey (71 from 44) pounced on any loose delivery, sending three into the stands and adding six boundaries on Tuesday night.

Star West Indies recruit Star Darren Sammy (2) was out cheaply caught in the deep after failing to clear the field with one of his trademark big hits.

And British import Alex Hales (1) again failed to find his feet, gone in the first over after being dismissed without score in the Hurricanes opening round match on Saturday.

Brett Lee (3-34) was the pick of the bowlers for the Sixers, claiming the scalps of Hales, Bailey and Evan Gulbis.