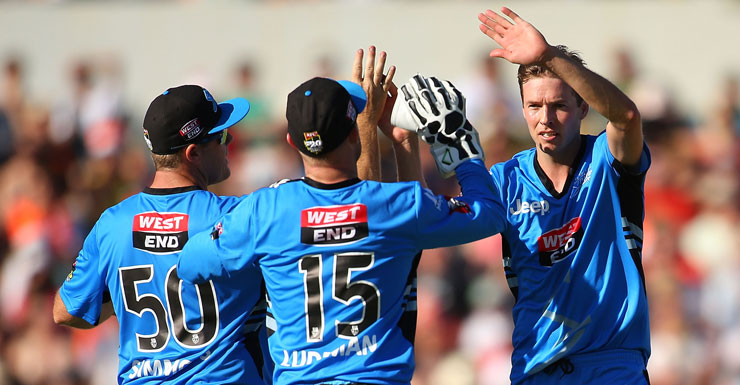 Tail-ender Adam Zampa was the hero as the Adelaide Strikers secured a dramatic one-wicket victory over the Perth Scorchers in Monday night’s BBL clash at the WACA Ground.

The Strikers needed eight runs off the final over with just two wickets in hand.

• Hussey and Kallis star for Thunder

And when Kane Richardson was run out, the equation became seven runs needed off three balls.

Zampa released the pressure valve with a big six over mid-wicket, and the 22-year-old was celebrating the next ball when paceman Yasir Arafat bowled an above-the-waist full toss.

Just one over earlier, the Scorchers were adamant Zampa should have been given out for caught behind when he was yet to score.

But with luck on his side, Zampa made the most of his life to score the winning runs in just his 11th T20 match.

Evergreen veteran Brad Hodge also played a key role in the win with a composed 42 off 36 balls.

Behrendorff finished with 4-22 off four overs in yet another sign he is ready to take the step onto the international stage.

Ludeman cracked an unbeaten 92 off 44 balls in last week’s trouncing of the Melbourne Stars.

The 27-year-old reached his half-century off just 18 balls in that match.

But against the Scorchers, Ludeman had just 13 runs to his name by the time he faced his 18th ball.

The Scorchers entered the match featuring just three of the players who played in last summer’s final win over the Hobart Hurricanes.

Michael Klinger smacked 49 off 33 balls and opener Marcus Harris chipped in with 26 off 19, but it was slow going after that.

New recruit Michael Carberry struggled to find his groove, with the Englishman playing and missing a host of times on the way to 27 off 35 balls.

At one point, Carberry’s bat went flying around 15 metres in the air to short fine leg after losing his grip on one wild swing.

Strikers paceman Kane Richardson finished with 3-31 off his four overs, while Trent Lawford (0-15 off three) and spinner Johan Botha (1-25 off four) kept the run rate down.