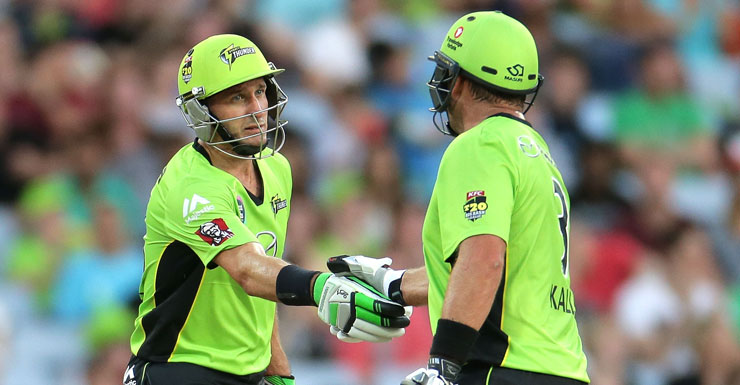 It was supposed to be Joe Burns’ night, but Mike Hussey and Jacques Kallis stole his thunder.

Burns may have been savouring his dream call-up earlier on Sunday for the Boxing Day Test, but the 25-year-old took a back seat as two of cricket’s ageless greats lit up ANZ Stadium and the BBL.

Batting together for the first time after enjoying a decade-long Test-match rivalry, Hussey and Kallis both blasted big half-centuries as the Thunder amassed 1-208 from their 20 overs.

Hussey cracked 96 off 60 balls, including seven sixes, before skying one off Cameron Gannon to keeper Jimmy Peirson to fall tantalisingly short of a whirlwind ton.

On debut in the BBL, Kallis didn’t disappoint, going even closer to smashing a century.

The South African cleared the rope six times in his 97 not out from just 55 balls.

Kallis needed three from the last ball of the innings to reach triple figures, but was unable to get bat on ball from Ryan Duffield’s final, legside delivery.

“It would have been nice to get a hundred, but I’m happy with that performance,” he said.

Losing wickets steadily, the Heat never really threatened to reach Thunder’s haul, and certainly not after Burns holed out in the deep – to Kallis of course – for 28 off 23 deliveries.

Burns also copped a Dirk Nannes slower ball in the midriff, but said nothing would stop him from making his Test debut for Australia against India at the MCG on Friday.

While it was Nannes who struck Burns, it was fellow quick Gurinder Sandhu who dismissed him and inflicted most of the damage for the Thunder, snaring 3-19 from three overs.

Every Heat bowler was hammered, including former England Ashes hero Andrew Flintoff, also on his BBL debut after more than four years in retirement, save for a few T20 games in England earlier this year.

Flintoff was only given two overs, finishing with 0-25, and was then caught on the boundary for a duck as the match slipped away from the Heat.

Dan Vettori was also out for a duck, he and Flintoff unable to match the heroics of fellow veterans Hussey and Kallis, who backed up his near-ton with the key wicket of Heat opener Dan Christian.

Kallis lived up to his billing as one of the all-time great all-rounders.

“It was just nice to have him on our team for once instead of having to play against him,” Hussey said.

“He showed he’s one of the best players that’s ever played the game.”