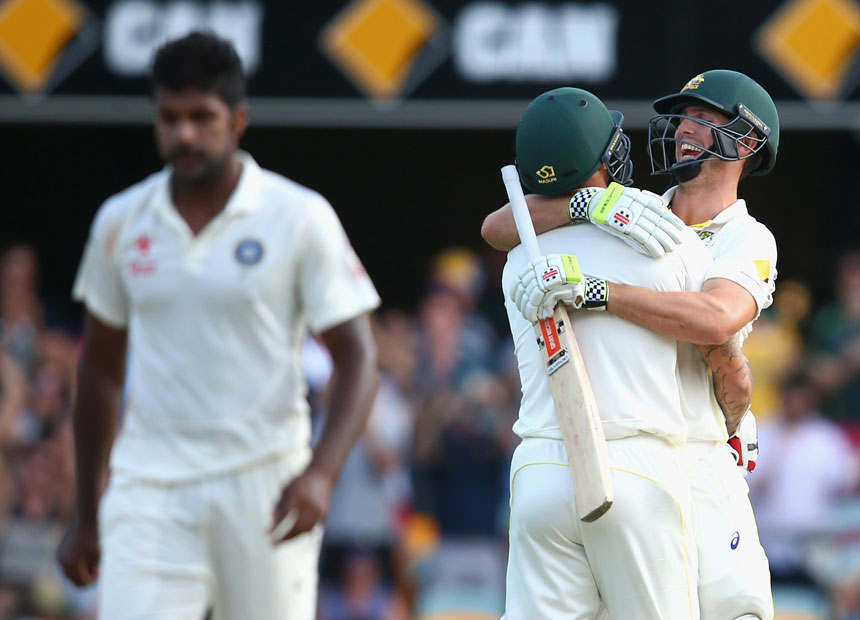 With Australia wrapping up the second Test within four days at the Gabba to race out to a 2-0 series lead, the summer is off to the best possible start for the home side.

But it’s not all plain sailing. Ahead of the Boxing Day Test in Melbourne, injury concerns for Australia are causing some minor headaches.

Mitchell Marsh has been ruled out of the MCG Test with a hamstring injury, and has been replaced by Queensland batsman Joe Burns. Burns is one of the leading run-scorers in Sheffield Shield cricket this season.

• Johnson inspires as Aussies win by four wickets
• The 21 minutes that broke India down
• Big-hitting Burns brought in for Boxing Day
• So how’s the sledging working out for you?

David Warner retains his place in the squad despite concerns over an injury to his thumb, while Ryan Harris looks to be over the worst of a minor quad strain.

The injuries have probably saved a few older players from a not unreasonable level of scrutiny and criticism. If all top-order batsmen were fit and firing, there can be little doubt that Shane Watson and Brad Haddin would be under more pressure than they are.

Nevertheless, here are the lessons to take away from the second Test in Brisbane:

The Gabba caterers used too much spice. And so did the practice wicket curators. We need more consistent umpiring. But DRS wouldn’t have helped, because the 50-50 calls go against us. Please.

There have been numerous times during this series where India’s bowlers have let the Australian batsmen get away from them. Bowling around the wicket to David Warner still has me scratching my head. Bowling short on a leg-side line with catching men behind the wicket on days three and four does as well.

Then there was that wacky day three field for Johnson, where a fly slip in no-man’s land was paired with three slips and a gully – a field that requires two completely contradictory lengths of bowling!

But no, no. There are other reasons you’re losing Tests, India. Keep piling up the band-aids, by all means.

Josh Hazlewood is the real deal

Josh Hazlewood had a dream debut with 5-68 in India’s first innings, followed by a further two wickets in the second. He was the first Australian quick since James Pattinson to take five-for in his first Test.

The comparisons with Glenn McGrath are obvious, but McGrath did take a while to become great. Though he averaged four-and-a-half wickets per Test over his career, McGrath was midway through his third Test before he had as many Test wickets as Hazlewood has already, and didn’t take a five-wicket haul until his 10th match.

So while Hazlewood may well end up as good as McGrath, his brilliant start at Test level is more closely aligned to that of another tall, but miserly, NSW Test quick – Stuart Clark.

Clark also managed five wickets in his first outing with the ball in Test cricket, and by the end of his debut series – a three-Test series in South Africa – had 20 wickets to his name.

Hazlewood is having a similarly immediate impact, and that’s what makes his performance in Brisbane even more exciting. Like Clark back in 2006, Hazlewood looks made for this level, and it’s hard to see anything other than a lengthy Test career ahead of him.

Smith showed every reason why he’s been considered a future Test captain. He was unhindered in his batting, he was aggressive in his field-setting, and he was smart in the way he managed his bowlers in the sweltering conditions across the first few days.

So impressive was Smith in his new role, that the number of voices suggesting he should hold onto the captaincy when Michael Clarke returns is growing.

Similarly, there is a growing belief that Smith, and not George Bailey, should lead Australia to the World Cup in February.

It’s not at all inconceivable that Smith could before too long become the first captain across all three formats since Ricky Ponting back in 2006.

Under the radar, but Shaun Marsh still under the microscope

Not unlike Watson and Haddin, Shaun Marsh can probably be thankful for the couple of injury concerns in and around the Test squad.

His 17 in the second innings, dismissed with under 20 runs to win, along with two dropped catches, will do nothing to quell the belief that he has again profited from considerations of promise over substance.

Marsh’s only way to consolidate this chance he’s been given is to score heavily. It’s that simple.

Australia vs India: what we learned from Brisbane