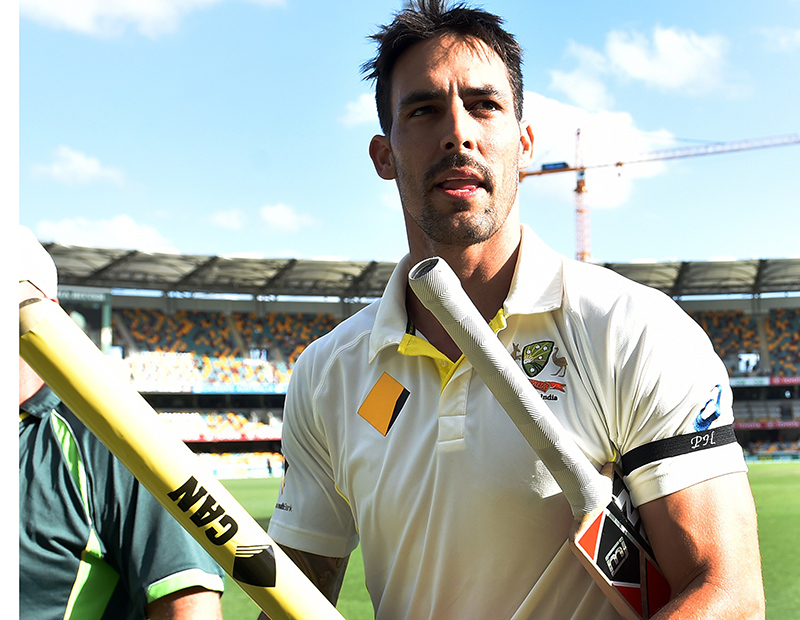 The rush hour that is the last Saturday before Christmas is beyond compare. A head-spinning, body-rattling, brain-frying, emotion-draining trial that has overwhelmed the best and most prepared of men.

India had little sense of what was coming, a foreigner straying unknowingly into the Chadstone car park. Before it found its bearings in the mayhem it had lost its place entirely and soon enough the Test match with it.

Mitch Johnson brought the frenzy. Finally harnessing and unleashing the menace and venom that struck such fear at the Gabba last summer.

Having previously shared with his new captain the partnership that revived Australia’s hopes, Johnson fast-tracked a game that had seemed destined for the cracks and shadows of day five, delivering Steve Smith first-up success.

It was done in a destructive 21 minutes and, as has been the case in both Tests so far, the visitors aided and abetted their demise from a position of such promise.

Cricket thrives on its formatted procession and natural progression. When Shikhar Dhawan chose not to resume his innings after being struck on the wrist in the practice nets, the Indians appeared at sixes and sevens. Number four was in at one down. In theory it should not have mattered. Every batsman who offered an opinion assured you it did.

To watch the previously composed Virat Kohli through his troubled 13-minute innings was to be convinced of the latter. He appeared harried and hurried as if his premature requirement had been thrust suddenly upon him. It seems that is precisely what transpired.

A discombobulated figure, Kohli nearly lost his off-stump without offering. When he used the bat he assisted with an inside edge to disrupt that stump and give Johnson his first scalp of the day.

The Australian spearhead, who seemed just as likely to melt in the first innings, had the thread. By his own admission he’d been a little bit off these past two weeks. Now he felt the rhythm.

Ajinkya Rahane swung from the hip and top-edged Johnson beyond the reach of Brad Haddin. The bowler had his revenge as the follow-up spat up toward the batsman’s grill. Rahane took evasive action. The ball took the shoulder of the bat. Nathan Lyon took the catch in gully.

Better still was the sharp riser Johnson sent down to Rohit Sharma second ball. The keeper collected the nick and India was cast.

M.S. Dhoni looked to disrupt the flow. The captain walked across his stumps intending to flick Josh Hazlewood through square. It was too soon. He missed. And was adjudged lbw. The overnight 1 for71 had disintegrated to 5 for 87.

Dhawan finally appeared at 6 for 117. He batted unimpeded and exceptionally well. He stroked boundaries where he could and farmed the strike a long way out.

He gave India a lead. Any chance of it being “formidable” had long been scuppered. With “challenging” also beyond reach Dhawan guided the total toward “tricky”.

He perished on 81 attempting a premeditated paddle sweep. Lyon appealed with unusual restraint given the full-bodied inquiries he has thrust at Marais Erasmus this summer. The umpire though never hesitated in crippling the Indian resistance. Dhawan departed a curiosity to the last.

When Johnson took his fourth and India’s last, the chase was set at 128.

Australian players and followers alike have seen enough to know the potential awkwardness contained in such a task.

Any hope of Dave Warner simply plundering the way was quashed immediately as Umesh Yadav struck him a nasty blow on the thumb. When an inspired Ishant Sharma removed him, it was a mercy dismissal such was the opener’s pain.

Shane Watson added to the thick brief against his status as a Test number three with an injudicious hook that had the home team fidgety at tea.

The professionalism of Chris Rogers was never more welcome. He efficiently broke the back of the chase. His steady touch emphasised once he had departed still 43 runs short.

Australia hurtled after the total which, while preferable to staggering, condemned it to lurch to victory with only four wickets to spare.

Ultimately the margin was a fairer reflection of the match than a romp. These Tests have been devilishly close yet Australia has a commanding two-nil lead and Smith’s tenure in uncertain times got the steadying beginning so desperately sought.

That reality would serve only to fill the Indians with rue anew for their disorderly morning in which they were trampled in the rush.

The 21 minutes that broke India