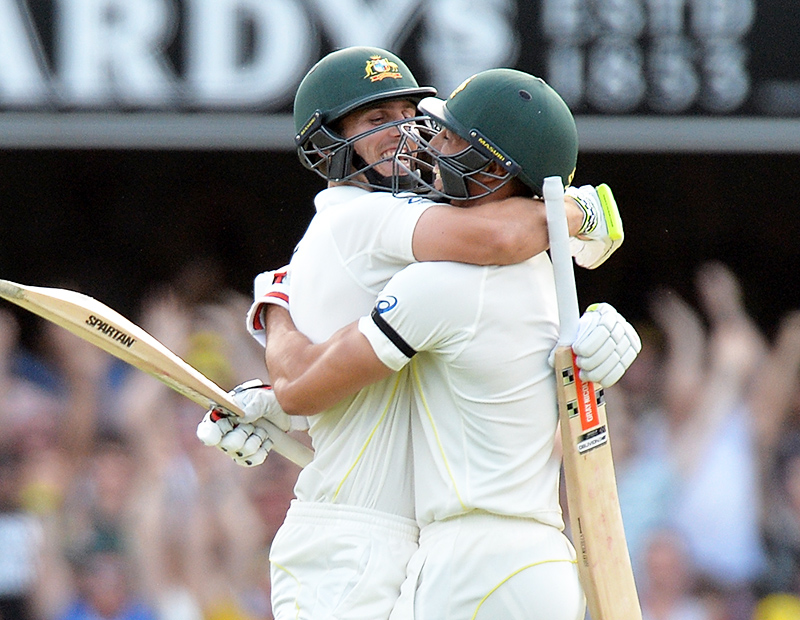 Australia has beaten India by four wickets on the fourth day of the Second Test after a batting collapse in early in the day sparked by Mitchell Johnson.

Mitchell Johnson continued his rampaging form in the second Test, as India woefully collapsed to 7-157 at lunch on day four in Brisbane.

Johnson clubbed 88 off 93 balls on Friday, lifting Australia to a first-innings lead of 97 runs at the Gabba.

The left-armer, who went wicketless in the first innings at the venue for the first time since 2010, backed it up with three key scalps in the space of two overs.

India resumed at 1-71 on Saturday, their woes starting before play when opener Shikhar Dhawan was struck on the wrist in the nets and retired hurt before coming back out to bat.

Cheteshwar Pujara, unbeaten on 15 overnight, watched on in disbelief as India slumped to 5-87 in the space of 6.2 overs.

Johnson started the rot in his second over of the day, Virat Kohli chopping a ball onto his stumps.

In his following over, the 33-year-old’s pace and bounce removed Ajinkya Rahane and Rohit Sharma.

Rahane popped up a catch to Nathan Lyon at gully, while Sharma was caught behind.

On both occasions, third umpire Simon Fry took his time checking the no-ball with Johnson’s foot barely behind the paint.

“I actually thought the second one – it may have been very touch and go,” injured quick Ryan Harris said, while calling the game for ABC radio.

“There was a bit of debate in our room whether there was anything behind, but the umpires made the decision. It was a good decision.”

Ravichandran Ashwin ensured Australia would have to bat again, scoring 19 as the tourists tried to settle under overcast skies.

Ashwin was bewildered to be judged caught behind off the bowling of Mitchell Starc, lingering at the crease momentarily and staring at umpire Ian Gould.

Dhawan returned to the crease, with India in real need of a big partnership between their last two recognised batsmen.

Hazlewood’s steepling bounce was the undoing of Pujara on 43, the right-hander falling in similar fashion to Rahane when he provided another catch to Lyon.

Dhawan reached the meal break on 41 not out, while Umesh Yadav was seven.

Yadav was almost run out in the final over of the first session by a direct hit from David Warner.

Dhawan, fined for his role in a heated confrontation in the first Test, exchanged sharp words with Warner and Shane Watson when the teams walked off at lunch.