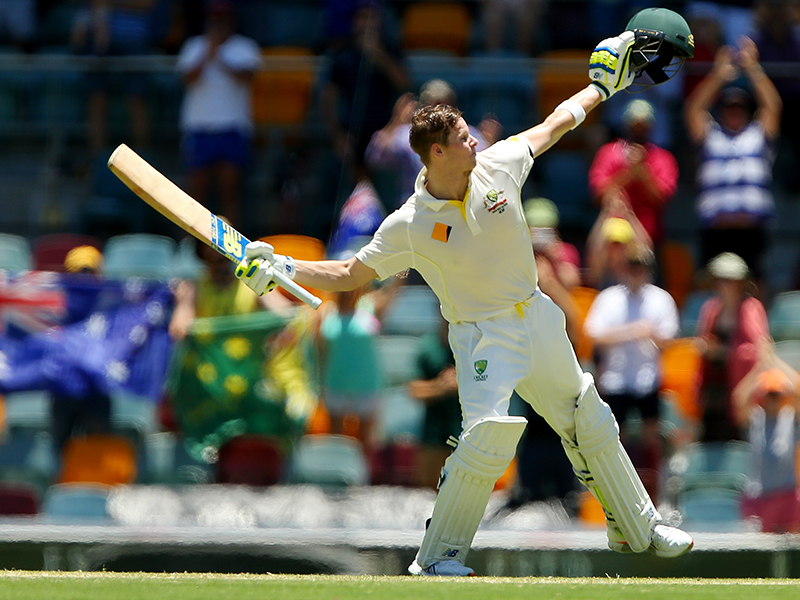 It takes a bit to outshine Steven Smith’s brilliant batting at the moment, but Mitchell Johnson managed it in one of the innings of his career on Day three in Brisbane.

India will go into the fourth day of the Second Test on 1/71 trailing by 26 runs, after they finally removed the last of the Australian tail just after tea.

Smith compiled a brilliant 133, but it was the crisp strokeplay of Mitchell Johnson, and later Mitchell Starc (52) that won the plaudits.

India had quickly removed both Mitchell Marsh and Brad Haddin early, but then bizarrely drew themselves into a battle of antagonism and short-pitched bowling when Johnson arrived at the crease.

It fired up the big Western Australian quick, who after poking around for runs from his first ten balls, unleashed a flurry of boundaries to raise his tenth Test 50 in just 37 balls.

It was further reminder that Johnson’s talents aren’t just limited to the ball. It was also a reminder of Johnson’s feast or famine returns with the bat.

This was Johnson’s second fifty in five innings, but the previous three were an unbeaten naught and two ducks.

In twelve innings in 2014, Johnson has five scores above 27, but also six scores under 6 – three of them ducks, plus the aforementioned naught not out.

Today was a feast, and in amongst Johnson’s 13 fours and a six were beautifully struck drives, cuts, and pull shots worthy of any top order batsman.

His straight-driven boundary to reach 50 will take a lot of beating as the shot of the summer.

For a good while after lunch, India took their bowling lines and field placements to new dunderheaded levels, though.

MS Dhoni persisted with a ridiculous fly slip for Johnson that was so deep it was neither saving one, nor four.

Johnson slashed at a wider back-of-a-length ball that comfortably flew to Ishant Sharma down there, but such was Ishant’s lassitude and no-man’s-land positioning, the ball landed behind him in the field of play before crossing the boundary.

At park level cricket, such a lapse of concentration would result in a fine and the full gamut of menial close of play tasks: picking up the cones, sweeping out the dressing rooms, the lot.

In truth, much of the blame at this point had to be on Dhoni, whose reaction to erratic bowling was to provide a field almost impossible to bowl to.

Lo and behold, when Ishant did finally manage to get his own length right, Johnson couldn’t help himself and nicked a ball he should have left alone. However, the damage had been done. When Johnson was dismissed, Australian trailed by just 13.

Ishant removed Smith in the same over – for a second century in consecutive Tests, and his first dismissal of the series – but after that, the bad habits returned.

Umesh Yadav seemed intent on building Mitchell Starc’s confidence via the bat, with fielders in catching positions on the off side met with short balls on leg stump lines, and boundaries coming in front of square. The solution to this wasn’t to adjust the line, but to go around the wicket and bowl more short stuff.

This was precisely the sort of display that led to bewilderment at India’s ascension to the top of the ICC Test rankings a few years back. For all their brilliance, India are also more than capable of serving up bowling that even beach cricketers would fancy a piece of.

It was genuinely harder to work out whether the bowlers’ sense of delivery or Dhoni’s captaincy and field placement was more underwhelming. When Haddin was removed cheaply again, Australia trailed by 161 with just four wickets in hand.

But by the time India took the last wicket, Australia had been gifted a 97-run lead; a lead India still hadn’t reeled in by stumps.