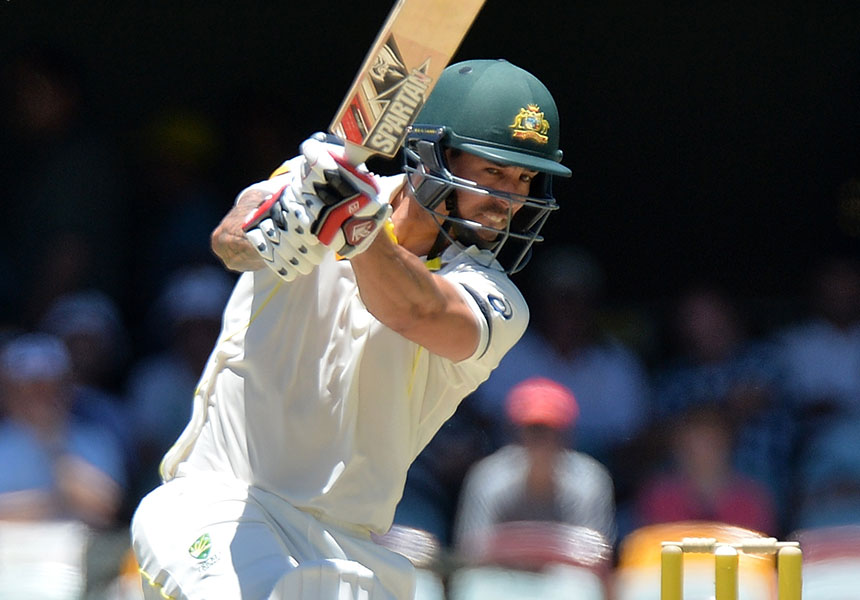 India lost an early wicket in its second innings with Murali Vijay falling to Mitchell Starc for 27 and the tourists were at 1 for 71 at stumps after scoring at 3.09 runs an over.

Australia were all out for 505 earlier in the afternoon, leading India’s first innings score by 97 runs after the bowling attack staged a stunning  lower order fight back.

Last man out was paceman Mitchell Starc who fell to off spinner Ravichandran Ashwin shortly after Australia returned from the tea break.

Earlier in the afternoon express bowler  Mitchell Johnson led the way at the ‘Gabba, compiling a swashbuckling – and game-changing – 88. He deserved a century despite India letting a couple of chances go to ground.

All up Australia’s bowlers put on 197 with spinner Nathan Lyon chiming in with an entertaining 23 and rookie Josh Halzewood left  stranded when Starc departed adding  31 runs to his impressive five wicket haul.

So strong was the tail end batting performance that only debutant captain Steve Smith, with his authoratitive 133 and Chris Rogers with 55 bettered the performances of Johnson and Starc.

Wicket keeper and handy batsman Brad Haddin chalked up the lowest score of 6 after being caught off fast medium bowler Varun Aaron.

Smith’s performance gives him a series average of 337.

Prior to Johnson taking the crease Nine Network commentator Shane Warne made the prescient  comment “they’ve fired up the wrong bloke here.

Don’t do it to Mitchell Johnson,” Warne observed while calling the game for the Nine.

Johnson, who failed to take a wicket as India amassed a first-innings total of 408, began his knock strongly, crashing  a belligerent half-century off 37 deliveries.

Ishant Sharma, called into the attack after Haddin’s dismissal, copped the initial treatment.

Sharma’s two overs cost 25 runs and his spell ended then and there.

Johnson swung freely – pulling short balls off his chest and lashing wide deliveries over the slips.

He smacked three consecutive boundaries off Aaron, prompting captain MS Dhoni to run up from behind the wickets and counsel the express paceman.

Aaron, who went off the field in the first session due to a shoulder injury, has figures of 1-113 from 20 overs.

Dhoni regularly tweaked his fields and offspinner Ravichandran Ashwin was thrown the ball, but the onslaught continued.

Johnson crashed an incredible six off the bowling of Ashwin, dispatching the ball over his head and into the crowd.

Smith cut a wide ball from Aaron to become the 28th player in the history of cricket to score a century in their first Test as captain, and the ninth Australian.

Australia all out for 505 as bowlers blaze away