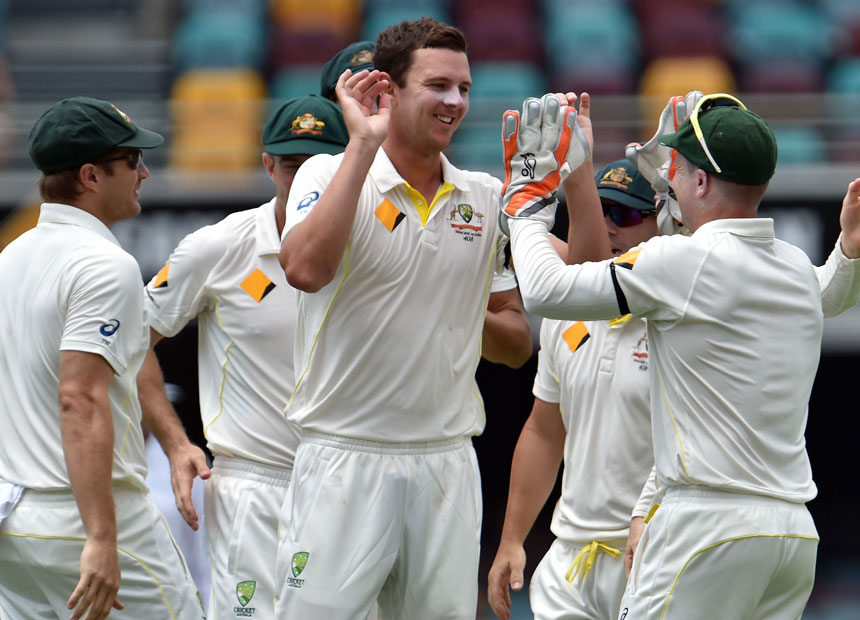 Australia made a solid start to its first innings against India at the Gabba but lost opener Chris Rogers on the tea interval to reach 3-121, in reply to the visitors’ total of 408.

New captain Steve Smith is the not out batsman on six.

Earlier, Josh Hazlewood made a blistering start to his Test debut with five wickets in the Indian innings.

An in-form David Warner and edgy Rodgers strode to the crease after lunch on day two in Brisbane, with Warner the first to go despite his recent purple patch.

Warner ballooned a leading edge to slip off the bowling of Umesh Yadav for 29, before Shane Watson again failed to make the most of a solid start when he was out for 25, caught off Ashwin’s bowling.

Rogers, who has been under pressure to perform, fell to a cunning Yadav delivery from around the wicket that forced him to trickle a ball from his thigh to a strategically placed leg slip.

Earlier in the day, India was restricted from making a much bigger total thanks to debutant Hazlewood.

Hazlewood was the first Australian bowler since James Pattinson in 2011 to take five wickets on debut with figures of 5-68.

The NSW paceman has been the standout performer so far in a Test where the bowlers have battled for rhythm.

He singlehandedly kept Australia in the game where it looked like the visitors would eke out a big score.

Brad Haddin got a milestone of his own, equalling the record for most dismissals in a Test innings by a keeper with six.

Watson dismissed Rohit Sharma in between Hazelwood’s scalps, his first since March, for 32 thanks to Smith who took a screamer at second slip.

India resumed day two on 4-311 after frustrating Australia with a composed batting display on day one.

Smith’s bowlers toiled in the Brisbane heat with Hazlewood most impressive.

Mitchell Johnson and Lyon struggled to find any consistency while Mitch Marsh, Mitchell Starc and Hazlewood all spent time off the field with injuries.

Marsh has been ruled out from bowling anymore in the match.

Hazlewood got the prized wicket of gun batsman Virat Kohli for 19, although his first dismissal was deemed a poor decision from umpire Ian Gould.

Ironically the visitors chose not to have the Decision Review System (DRS) used in the series meaning Cheteshwar Pujara had to live with being caught behind off his helmet, gifting Hazlewood his first Test wicket.