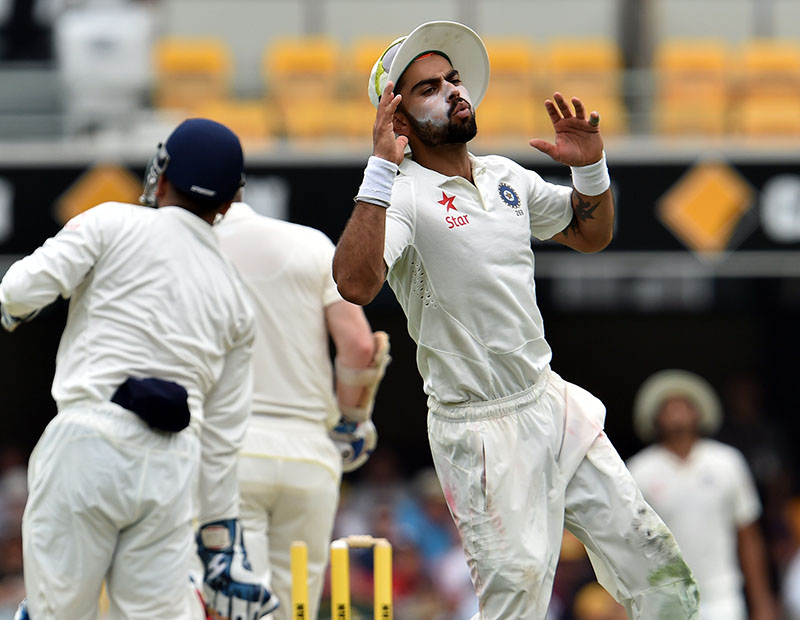 Maligned Australian opener Chris Rogers issued a timely reminder of his value to the Australian top order, compiling a fighting 55 in the middle session on Day 2 in Brisbane.

Australia finished the day on 4/221 when bad light stopped play. Steven Smith’s unbeaten run in this series continues, his tally now sitting at 279 runs scored and the Indian bowlers no closer to removing him.

Indian quick Umesh Yadav finished with 3/48, while recalled spinner Ravi Ashwin was probably the pick of the tourist’s bowlers, with 1/66 from 18 overs.

In the morning session, Josh Hazlewood had capped a memorable debut with the ball, becoming the first Australian quick to take five wickets on debut since James Pattinson three seasons ago. He finished with 5/68, and bowled superbly to spearhead the attack, as India were all out for 408 on Lunch.

Much had been made of Rogers’ run of form coming into the Test, and with the national selectors choosing to look to the future in naming Smith the new Australian Captain, many wondered whether the push for youth might extend to other players in the side.

Coming into the Second Test, Rogers hadn’t made a fifty in his past eight innings, a stretch going back to the Third Test against South Africa earlier this year.

Despite making 38 and 43 in the First Test against Pakistan in Dubai, three consecutive single-figure scores and a second-innings 21 last week in Adelaide were enough for the knives to emerge.

With opening partner David Warner initially feasting on the around-the-wicket offerings of the Indian right-armers, but then falling victim to a leading edge, Rogers then went on a boundary spree of his own, hitting 10 boundaries on his way to 55, and scoring at a strike rate significantly higher than his career mark.

At a time when the likes of former Test opener and now Tasmanian no.3, Ed Cowan, and Queensland top order bat, Joe Burns, are being widely mentioned as like replacements, Rogers’ knock should be enough to subside any talk of replacement for the time being.

What Rogers has done, in breaking the so-called ‘fifty drought’, is shift the focus onto other players of growing age and diminishing returns in the Australian side.

Shane Watson’s 25 was another unfulfilled start. Using the scrutiny of Rogers as a guide, Watson hasn’t broken fifty in at all in 2014, going back seven innings after he missed the UAE series. Going back to his career-high 176 against England at The Oval last August, Watson has managed just one more century and two more fifties in his past 16 innings.

Wicketkeeper Brad Haddin, just 53 days younger than Rogers, hasn’t made more than 28 since his first innings 75 against England at the SCG in January. Including that score, Haddin has just three scores above 14 this calendar year.

Shaun Marsh, as polarising a cricketer as an in Australia currently, may not be so lucky to keep the knockers at bay. His dismissal on 32 failed to capitalise on the chance offered just five balls earlier, when Ajinkya Rahane inexplicably dropped a skied pull-shot behind square. It would cost India nothing, fortunately, with Yadav drawing another false shot and Ashwin accepting the catch at first slip.

If Rogers was coming under fire, it would seem unfair that he be under the microscope on his own, with similar levels of underperformance with the bat also hovering in the side. Rogers may have bought himself some more time, and it will be interesting if his scrutiny is redirected, or just evaporates.

The same scrutiny certainly does not apply to Australia’s new skipper, with Smith again mixing graft and flamboyance to remain unbeaten at stumps.

Just as Rogers’ knock in the middle session set up Australia’s innings, Smith’s fifth innings of fifty or more in his last four Test Matches can push his side closer to a lead on Day 3.

Australia calls on its elders in a battle for the ages