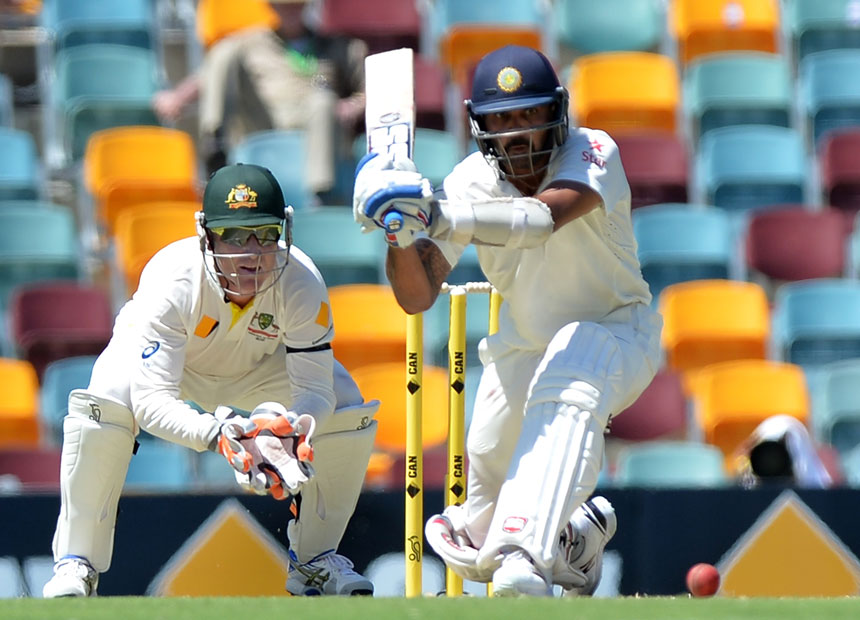 India has frustrated Australia on a hot first day of the second Test, with Murali Vijay surviving several dropped catches to post a mammoth century in Brisbane.

Vijay (144) paced his innings perfectly before unleashing against Australia’s bowlers to accelerate to a fifth Test century, but was thankful for two dropped catches in his innings.

At stumps on day one, India was 4-311, with Ajinkya Rahane (75 not out) looking set for a third Test century, with Rohit Sharma unbeaten on 26.

To make matters worse for Steve Smith, who made his Test captaincy debut in the injured Michael Clarke’s absence, his bowlers battled a number of injury complaints throughout a day where the mercury reached 35 degrees Celsius.

Mitchell Marsh (1-14) picked up his first wicket in Test cricket when he had Shikhar Dhawan caught behind for 24, but he was forced to leave the field early in the second session with a serious hamstring complaint.

The good news for Australia came in Hazlewood’s 2-44, claiming the scalps of Chuteshwar Pujara (18) and Virat Kohli (19) for his first wickets in Test cricket.

Controversy over India’s refusal to use the Decision Review System popped up again when Pujara looked to fend off a Hazlewood bouncer, but saw the ball cannon off his helmet grill and into Brad Haddin’s gloves.

The appeal went up immediately with the Australians adamant Pujara had gloved the ball as the batsman stood his ground, but he was forced to leave the field as the umpire’s finger went up.

Vijay was spared a dismissal when he edged Mitchell Johnson (0-64) to second slip when on 36, but the diving Shaun Marsh dropped him cold thanks to a strange configuration of his hands.

On 102, Vijay saw Marsh drop him again with a much more makeable chance as the cover fielder inexplicably leapt for a catch just above head-height, only for the ball to hit him in the wrist and fell to safety.

It would cost Australia dearly as Vijay and Rahane compiled a 124-run partnership off 165 balls.

Vijay’s innings was ultimately ended when Nathan Lyon (1-87) snared the batsman as he attempted to charge down the wicket, with his cover drive producing a feather edge through to Haddin.

Rahane then proceeded to accelerate past the half-century mark, smashing seven boundaries as he punished spinner and paceman alike late in the day.

The day closed on with another injury worry as Hazlewood traipsed off the pitch alongside the physio after pulling up sore, in a day where Australia struggled to keep 11 men on the field.