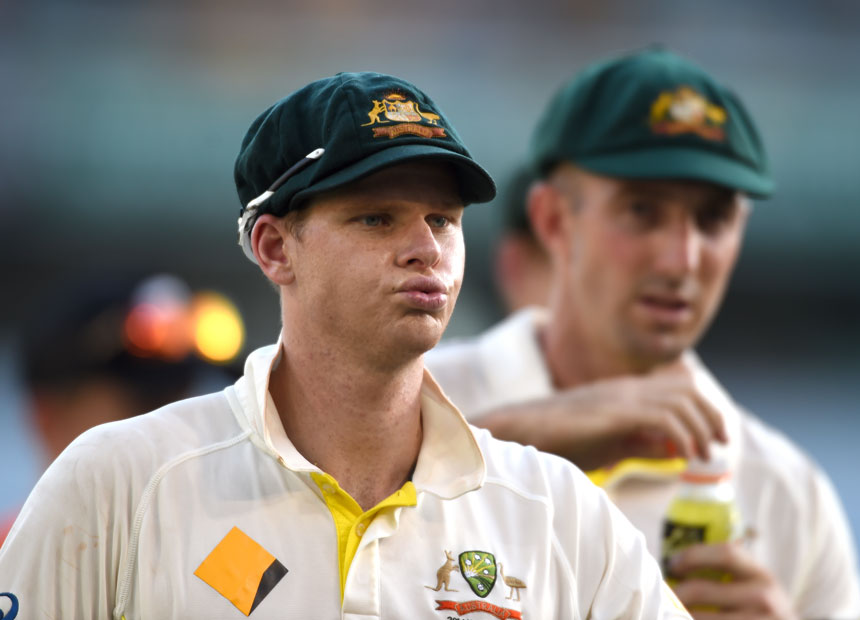 Steve Smith must be wondering what he did to annoy the cricketing gods.

On his first day as Australian captain – in the absence of the injured Michael Clarke – Smith could only watch on as India’s batsmen smacked his bowlers around the Gabba, before several of them fell victim to their own personal demons.

Smith finished the day with two bowlers off the field – one possibly for the rest of the match – and another holding a possible side strain.

In hot and humid conditions in Brisbane, Smith was forced to use his bowlers in short bursts throughout the first day of the second Test.

Aside from Nathan Lyon, none of the bowlers laboured any longer than four overs in a spell, and two- and three-over spells were common.

Mitchell Marsh was forced off with hamstring soreness just after lunch, and Mitchell Starc left the field during the afternoon session drinks break clearly battling with the conditions. He would return shortly after, but was seen holding his ribs and side muscles at the close of play.

Debutant Josh Hazlewood also required treatment for cramp not long after tea, and couldn’t finish an over late in the day.

They will resume on Thursday morning with the promise of even better batting conditions than those enjoyed on the opening day.

Earlier, Hazlewood made an impressive start and looked like he belonged at Test level. It didn’t take long before he was drawing an interest from bat edges and slips cordons alike.

Hazlewood’s first spell was miserly, but it was his line and shape that had the purists excited. To the right-handed Vijay, Hazlewood consistently had him coming forward, and beat him on several occasions.

In his 10th over of the day, he got his just reward. With a searing bouncer over the top of off stump, Indian No.3 Cheteshwar Pujara found himself drawn into evasive action that wasn’t quite evasive enough.

As Pujara leaned back toward the leg side with the ball seemingly following him, a noise was heard and Brad Haddin accepted the catch. Umpire Ian Gould raised the finger, and Hazlewood had his first Test scalp, albeit under slightly controversial circumstances.

Replays confirmed that the ball missed bat handle, armguard and gloves on the way through, and had actually deflected off Pujara’s helmet grille. Not that that will matter to the lanky New South Welshman.

The second ball of Hazlewood’s fourth spell saw a superb back-of-a-length ball to Virat Kohli nicked through to Haddin, after the classy strokemaker tried to cut one off the top of off stump. By over’s end, Hazlewood had Ajinkya Rahane playing and missing, and then bunting a poorly miscued shot over the bowler’s outstretched hand and in front of Mitchell Johnson at mid-off.

Hazlewood would finish his first day of Test cricket with the figures of 2-44 from 15.2 overs, while Starc and Johnson had a day mixed with accuracy and generosity.

The Indian batsmen toiled well in the Queensland heat. Vijay raised the century he left behind in Adelaide, and looked every bit as fluent as he did last week.

Later in the day, Vijay found the going a bit tough as well, deciding instead that stand-and-deliver boundaries were the best way to negate running between the wickets.

Eventually, he would succumb on 144, beaten by the turn as he attempted to put Lyon back over his head.

After playing a major role in India adding 160 runs in 31 overs for just his own wicket, Vijay had earned the respite.

His teammates will be eager to press home the advantage on day two.