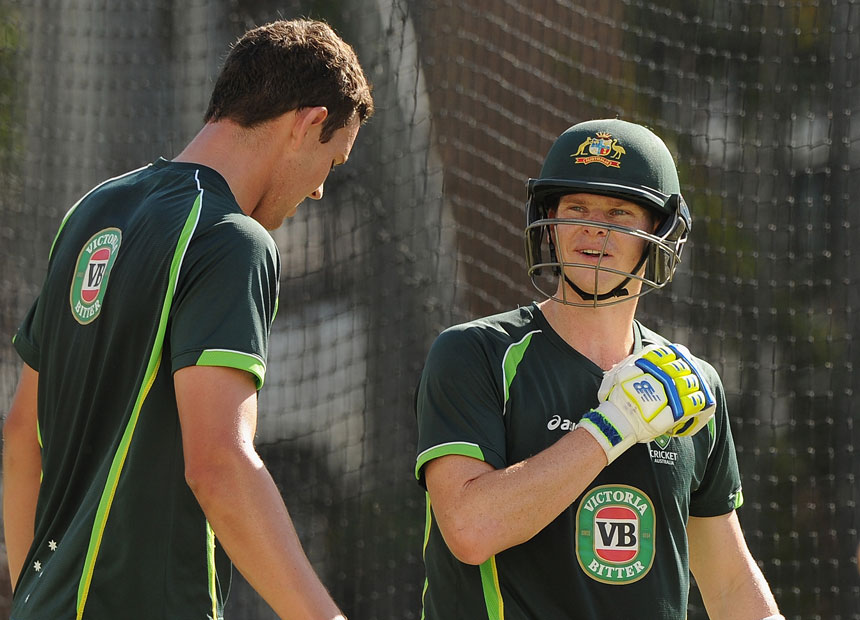 The prospect of unleashing Josh Hazlewood on a green Gabba deck against India has got Australian captain Steve Smith excited.

But probably not Peter Siddle.

First there was Siddle’s drop in pace, then his form.

Now the 30-year-old, 56-Test veteran has slipped down the pecking order after being overlooked for young gun Hazlewood for the second Test starting on Wednesday.

Left-arm quick Mitchell Starc also replaces Ryan Harris, who picked up a quad strain in Australia’s 48-run Adelaide victory but should be fit for the Boxing Day Test in Melbourne.

And it seems it will take some doing for the out-of-sorts Siddle to step out of it if all goes to plan in the second Test.

Smith could not hide his excitement over the thought of letting NSW teammate Hazlewood “zing a few” down on a juicy Gabba deck against a wounded India in a new-look attack.

“I’ve watched Josh very closely over the last couple of years at NSW and he impresses me every time – I think he’s only getting better and better,” Smith said of Hazlewood, who becomes baggy green cap No.440.

“I think this pitch out here will suit him perfectly.

“I’m looking forward to seeing him zing a few though on a fast and bouncy wicket.”

Hazlewood may be just 23 but a Test debut against India has been a long time coming for the NSW country boy.

One of only three Australians to make his ODI debut at 19, Hazlewood was selected for the 2010 tour of India but withdrew due to a back stress injury.

Hazlewood was also part of Australia’s Test squad for the home series against South Africa in 2012-13.

The fast bowler who played first grade against men at 15 in Tamworth and became the youngest quick to be picked by NSW at 17 finally convinced Test selectors with recent ODI hauls of 5-31 and 3-51 against South Africa.

Siddle’s fate was sealed with match figures of 2-109 at Adelaide with his speed dipping to as low as 120kph, albeit while battling illness.

“He’s not out of the loop, he’s still around the team and hopefully he’ll play another game soon.”

Smith has backed Harris to return in Melbourne after resting yet another injury but a Siddle comeback remains to be seen if the young guns fire at the Gabba, as expected.

“It is a traditionally fast and bouncy wicket and it looks no different out there for this Test match,” Smith beamed.

“Hopefully after the wickets we’ve played on in Test cricket at the Adelaide Oval and the two in the UAE (against Pakistan) it’s exciting for our fast bowlers to finally have something that’s going to have some liveliness to it.”