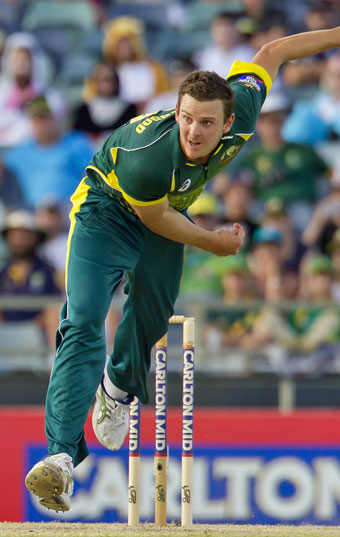 New South Wales fast bowler Josh Hazlewood will make his Test debut after being named in the Australia XI to face India in Brisbane.

Hazlewood will be joined by fellow Blues quick Mitchell Starc, with the pair replacing Ryan Harris (quad strain) and Peter Siddle in the home side’s pace attack for the second Test starting at the Gabba on Wednesday.

Clarke underwent surgery on Tuesday for a torn right hamstring and will be out for the rest of the four-Test India series.

Hazlewood has long been regarded as a boom pace bowling prospect, having made his one-day international debut for Australia aged 19.

Now 23, the rangy quick was forced to contend with a series of injuries but he gave glimpses of his best form in last month’s one-day series against South Africa, returning the figures of 5 for 31 and 3 for 51 in his two appearances.

Former national selector Andy Bichel, speaking before Hazlewood’s elevation to the Test XI, backed the 196-centimetre tall quick to make an impression against the Indians if chosen.

“He did well in the Australia A stuff last year. He was the leading bowler in that series. He’s played some one-day cricket for Australia, and he did well for New South Wales in the backend of last season in the Shield games.

“He took that responsibility of taking more wickets up front and also coming back for the crucial overs when they needed a wicket. He’s well groomed for Test cricket.”

Starc returns to the squad after last appearing for Australia at Test level in the 356-run loss to Pakistan in the second match of their series in United Arab Emirates early last month.