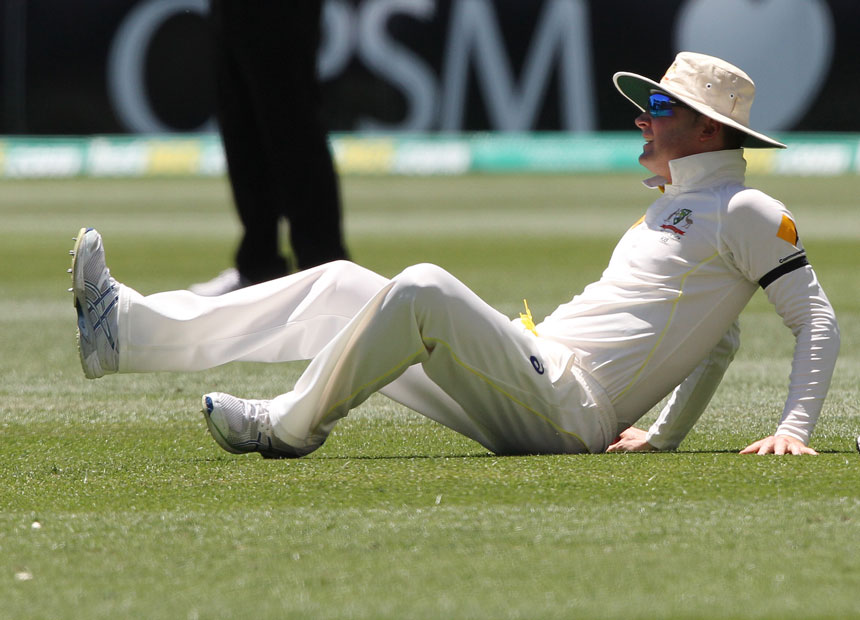 But the Australian captain faces a series of serious hurdles as he attempts to take part in the one-day World Cup, which starts on February 14.

Clarke overcame a left hamstring injury to play the first Test against India, but suffered a flare-up of his degenerative back condition on day one.

Clarke retired hurt, returning to the crease a day later and completing a courageous hundred.

The 33-year-old then tweaked his right hamstring while fielding on day five, with scans confirming he will miss the rest of the four-Test series. Click the owl to see Clarke’s run of injuries. He remains in serious doubt for the World Cup, with Clarke fearful it could be even more serious than that.

“There’s a chance I may never play again,” he said, noting Cricket Australia was in dialogue with experts about the best way to treat the latest tear.

Lehmann’s gut feel was Clarke would lead Australia once more.

“I think he will be back. You have your fingers crossed, we will wait and see,” he said.

Whenever Clarke is next on the cusp of a recall, it won’t be a straightforward fitness test.

Lehmann and fellow selectors must weigh up not only Clarke’s current state of health, but the risk his chronic back or hamstring woes could flare up at any moment.

Both incidents in the first Test were incredibly innocuous.

Team physio Alex Kountouris, speaking last month as Clarke raced the clock to play the first Test, admitted it was a hard issue to manage.

“Once he’s done it once, twice, the risks go up of a recurrence. How we minimise those risks is difficult,” Kountouris said, then analysing Clarke’s left hamstring injury.

Lehmann was reluctant to discuss Clarke’s World Cup equation too much on Sunday.

“He needs to get it right. He knows that, we know that,” Lehmann said.

“One-day cricket is an explosive game and we need guys fully fit, all the time.”

Lehmann has already consulted the World Cup rulebook, confirming Australia could replace Clarke in their squad if he re-injures his back or hamstring during the tournament.

National selectors would presumably want Clarke to return during the group stage, ensuring he has a few games under his belt before the knockout fixtures.

“You need to score runs to be in the team,” Clarke said of his World Cup hopes.

“I play my best cricket when I get some momentum.”

Australia captain Michael Clarke has suffered a extensive list of hamstring and back problems over the past two years, with his exit from the Adelaide Oval just the latest example.

• Dec 2012 – Retires hurt during the Test in Hobart due to a right hamstring injury, but recovers to play Tests in Melbourne and Sydney.

• Mar 2013 – Misses the fourth Test in India due to three degenerative discs in his lower back, an issue Clarke has been managing since he was 17.

• June 2013 – Misses the IPL and Australia’s Champions Trophy campaign due to back and hamstring problems.

• Aug 2014 – Tweaks his left hamstring while training in Harare.

• Aug 2014 – Aggravates his left hamstring injury during an ODI against Zimbabwe, retires hurt and returns to Australia.

• Nov 2014 – Aggravates the left hamstring injury during an ODI against South Africa.

• Dec 2014 – Retires hurt during the first Test against India due to a chronic back injury, but returns to make a hundred and fields.

• Dec 2014 – Limps off Adelaide Oval due to a right hamstring injury. Scans confirm a serious tear that will force him to miss the rest of the four-Test series.

Lehmann backs Clarke to fight his way back