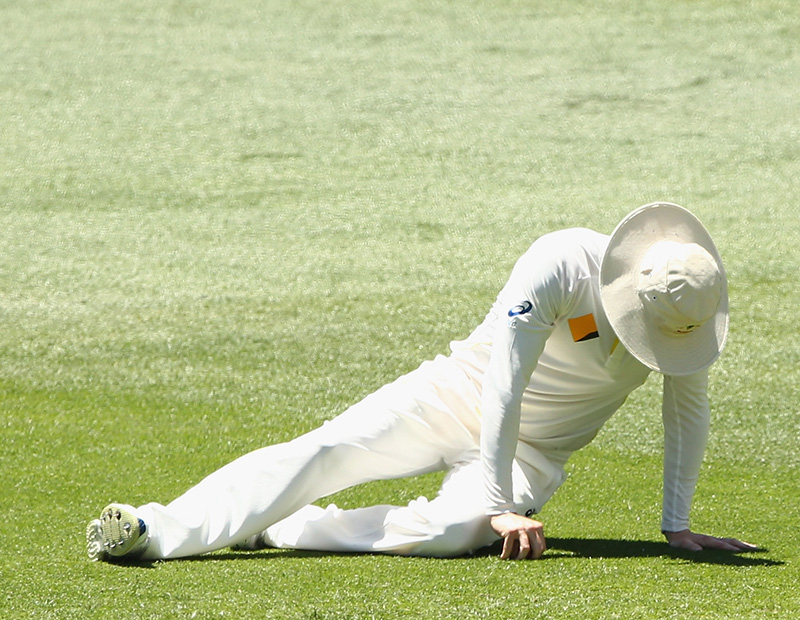 In literally one fell swoop, the course of Australian cricket changed.

Michael Clarke has done his hamstring again – this time, his supposedly good one.

Injured when swooping to field a ball on Saturday in the first Test against India, Clarke’s battered body will give Australian another Test captain – Brad Haddin.

And it will revive the Test career of another injury-prone batsman, Shaun Marsh.

Haddin and Marsh are short-term solutions for the second Test in Brisbane starting Wednesday.

But this is a long-term problem. With long-term ramifications.

What about the rest of the Test summer?

What about Clarke’s prospects for the World Cup, starting in two months?

And don’t say Australia don’t need him: Clarke has the third-highest average of any World Cup batsman – 83.62.

What about beyond the limited overs showcase?

Will his ailing body continue to fail him? Will he ever be able to trust himself again?

In the past two years, Clarke has reported seven issues with his hamstrings.

And they’re separate instances, though obviously linked, to his chronic back issue – three degenerative discs in his lower spine.

The back problem returned on Tuesday in what Australia’s team physiotherapist Alex Kountouris called a “significant injury”.

Now, he appears to have another significant one.

And Australian cricket have significant questions to ponder.

Clarke leaves field with another injury