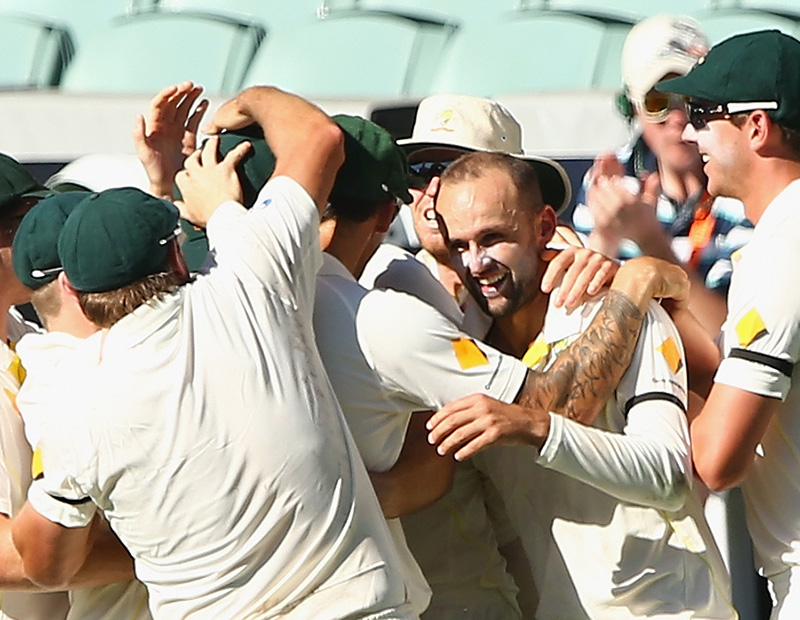 Nathan Lyon has spun Australia to a memorable 48-run victory over a brave India on an incredible fifth day at the Adelaide Oval.

On a final day that saw momentum change hands almost every hour, it took the best performance of Lyon’s career for Australia to overcome an Indian fight back led by the remarkable Virat Kohli.

Lyon’s second-innings figures of 7 for 152 took his match figures to 12 for 286, the first ten-wicket haul of his career, as he fought through periods of bad luck and a potentially match-winning partnership between Kohli (145) and Murali Vijay (99).

The Indian pair batted through the entirety of the second session unbroken and put on 185 as India – perhaps buoyed by the absence of Australian captain Michael Clarke who left the field with another hamstring injury – threatened to pull off a miraculous victory.

But again it was Lyon, a man often derided for his inability to make the difference on the final day of Tests, who finally removed Vijay one short of his milestone and set the ball rolling for a dramatic final session.

You work until you bowl the last ball in the last hour. It’s fantastic. I really don’t know what to say, to be honest.

Lyon dismissed Ajinkya Rahane (0) in the very same over, before taking the wickets of Rohit Sharma (6), Wriddhiman Saha (13) and the biggest scalp of all Kohli, who was caught on the boundary by Mitch Marsh.

Once Kohli was dismissed the result, for the first time in the day, seemed like a formality. Ryan Harris (1 for 49) and Mitchell Johnson (2 for 45) grabbed a late wicket each, before Lyon had the final say in drawing Ishant Sharma (1) out and presenting a smart stumping for stand-in captain Brad Haddin.

The Australian team immediately congregated around the number 408 printed on the Adelaide Oval turf to celebrate a thrilling Test win, done with the memory of Phillip Hughes always at the forefront.

Lyon was lost for words at the close of play after steering his side to a special victory.

“I don’t really know what to say. It’s an unbelievable effort from all the bowlers today. They’ve been hard at it all day, we stuck at it, it was fantastic,” Lyon told Grandstand.

“You work until you bowl the last ball in the last hour. It’s fantastic. I really don’t know what to say, to be honest.

“[I’ll sleep well] after a few beers. It’s unbelievable. As I keep saying, I don’t know what to say. I’m feeling unbelievable.”

Had his team gone on to win this match, Kohli’s innings may have gone down as one of the greatest in India’s history.

While his dismissal was the turning point for India’s chances in the match, it came in admirable fashion, holing out on the boundary as he relentlessly pushed for a victory few thought possible before the start of play.

While most batsmen were troubled by Lyon’s spitting bounce out of the rough, Kohli confidently took the attack to the spinner, working him effortlessly to the on-side time and again.

Nothing Johnson or Harris offered could bother him, and having reached his century shortly after tea and with Vijay seemingly poised to complete his, the odds looked to have swung in India’s favour.

His partner for most of the innings was Vijay who, despite having much more difficulty against Lyon, was able to ground out runs and also deserved a century.

Marsh paid tribute to India’s stars on the day, but revealed that Australia had targeted India’s lower order which crumbled under the pressure once their inspirational captain departed.

“We knew if we hung in there, it was really hard to start on that wicket and we saw that once we got one wicket we got on a roll.

“What a win for Australia.”

Umpires and technology threaten to steal the show

No classic Test between these two nations is complete without a hint of controversy, and predictably it was provided by the umpires and the conspicuous absence of the DRS in the match.

India was left frustrated when decisions went against it on day four, and was again left to bemoan a poor call when opener Shikhar Dhawan was adjudged to be caught behind off Johnson despite replays proving the only contact was to the shoulder.

Things would soon swing the tourists’ way though, as umpire Marais Erasmus continued to ignore a series of appeals from Lyon’s bowling.

One in particular to Vijay, when the number three was on 24, was especially questionable as the batsman offered no shot to a ball that would have struck middle stump a little over half way up.

A plethora of other very tight decisions would go India’s way, before Kohli was also trapped plumb in front on 86 again only to be given not out.

But, as these things tend to, the luck would swing back Australia’s way when Rahane was given out caught despite the ball missing his glove.

In the end, it is hard to argue that these decisions would have changed the result, however it did add another layer of intrigue to an enthralling final day.

The second Test at the Gabba is now only days away, and with Clarke having already been ruled out Shaun Marsh seems likely to earn a recall.

India will naturally be looking to bounce back but may find life even tougher now as the series heads to a pitch that will surely suit the Australian quicks.

Awesome to see @CricketAus win the 1st Test at @TheAdelaideOval & the win is dedicated to their best mate #PhilHughes. #AusvsInd

David Warner, Michael Clarke, Steve Smith, Virat Kohli, Nathan Lyon. So many once in a lifetime performances in one Test. #AusvInd

12 wickets for Lyon, a century in both innings for Warner. That’s a tough split for MoM. #AUSvIND — O Christmas Steve (@MolksTVTalk) December 13, 2014

Hold your head up India. Thanks for making great cricket. #AUSvIND @CricketTalkback