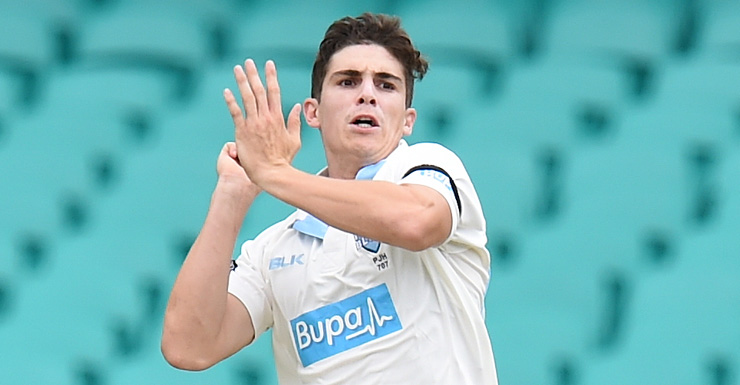 Sean Abbott has emerged from the darkest two weeks of his life to put NSW within touching distance of a dramatic Sheffield Shield victory against Queensland at the SCG.

In his seven overs, Abbott bowled three maidens and took six wickets for 14.

Midway through the middle session Abbott had torn through the Queensland middle order to have 6-9 from a remarkable spell.

By the time he finished up, the scorecard read three caught, two bowled and one LBW.

There was a round of applause at the Australia v India Test match at Adelaide Oval when Abbott’s wickets were read out over the loudspeaker.

At one point Abbott was on a hat-trick after removing Chris Hartley and Cameron Brimblecombe with consecutive balls but missed out when Luke Feldman survived the next ball.

Abbott endured the toughest of preparations as he dealt with the death of Phillip Hughes.

Hughes died as the result of being hit by a bouncer delivered by Abbott at the same ground two weeks ago.

But he has shown incredible mental resolve to have the Bulls teetering at 9-90, still trailing by 89 runs on the final day of the clash.

A result looked unlikely going into the final day after the Blues began the day still in the middle on 6-386.

They were eventually dismissed for 447 with an 179 run lead during the morning session.

News of Abbott’s six wicket haul was greeted with applause from the crowd when announced over the loudspeaker at Australia’s match against India at the Adelaide Oval.

Hilfenhaus strikes as South Australia bowled out for 45

Elsewhere, former Test paceman Ben Hilfenhaus led a brutal Tasmanian bowling attack to claim outright victory over South Australia, who collapsed to be all out for 45 at Bellerive.

Set 359 to win on Friday the visitor’s final scorecard told a sorry tale, with four batsman failing to contribute and a top score of just 11.

The total is the fourth-lowest first-class innings total for SA, according to records dating back to the 1800s.

Hilfenhaus finished with the superb figures 5-11 off 14 overs.