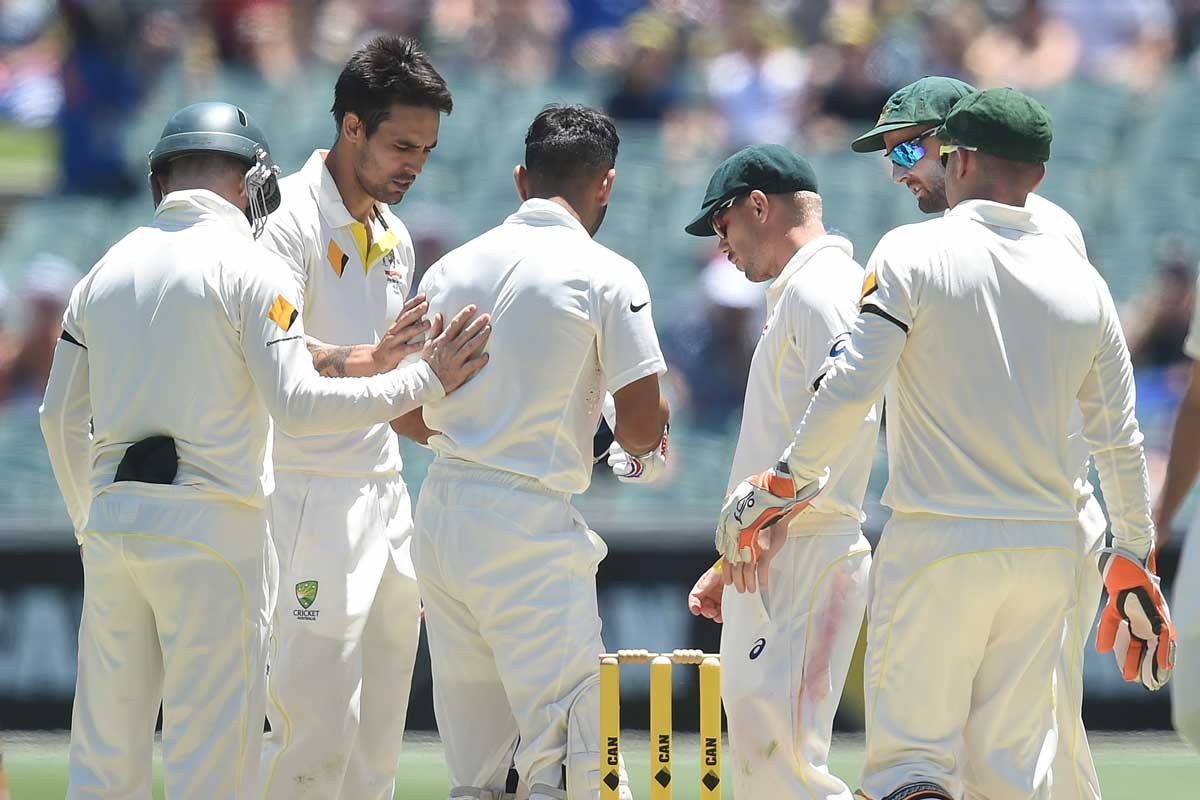 Mitchell Johnson’s first ball to Virat Kohli smashed into the badge of the Indian skipper’s helmet and, in a few moments, we would witness how the game has changed since the death of Phillip Hughes.

Kohli was shaken up, and Johnson came down the pitch, genuinely concerned for his welfare. When it transpired that he was unharmed, Johnson still needed counselling from Michael Clarke, an arm around the shoulder and a reassurance or two.

This from the Australian enforcer 12 months after his marauding left-arm pace had terrorised England. He would have been lauded for it back then; now the crowd fell mostly silent. In truth, nobody is quite sure how to react anymore. Bouncers are so much a part of the game, the beautiful brutal game, but there is the death of a man to consider.

Ironically the ball that hit Kohli was not even a bouncer. Kohli had misjudged the length and ducked into it when he could have defended the ball at chest height. But the reaction was interesting on two counts: first that Johnson seemed just a fraction confused about his role in the scheme of things, and secondly that it only emboldened Kohli.

India’s acting captain is a fighter, a competitor, and when he reached his century at Adelaide Oval his eyes burned and he screamed “COME ON” in the direction of his dressing room. It is not difficult to like his style.

It was a long day and India is still fighting to stay in the game at 5-369, with a 148-run deficit. Only one team can win, and Australia needs to persist at the labor-intensive job of eking out wickets on a strip that remains good for batting, albeit that it turned for Nathan Lyon.

Lyon was superb, bowling into the footmarks created by Ishant Sharma bowling around the wicket in the Australian first innings. He bowled Shikhar Darwhan through his legs, had Ajinkya Rahane caught off a wicked, spitting ball, and generally looked as though he might take a scalp with nearly every delivery.

He has his detractors but on this dusty strip, he was a huge challenge for India, and his figures did not reflect the quality of his bowling. Umpire Ian Gould’s refusal to call Rohit Sharma leg before to the off-spinner at 29, not offering a shot and very adjacent, denied him another wicket. It was a poor decision by Gould.

But mostly, Lyon bowled on the line that he needs to use, well outside off-stump encouraging batsmen to play against the spin. Too often in the past he has bowled too straight on wickets that are turning sharply; fortunately he seems to be learning.

Kohli played beautifully in that wristy subcontinental way but his dismissal for 115 by Johnson late in the day, top-edging a hook and well caught by a sliding Ryan Harris in the deep, was important. Johnson almost sent his next ball up the nose of India’s wicketkeeper Wriddhiman Saha, the paceman referring back to his best vintage.

Johnson is not at his best and still seemed unsure about his methodology. At times, for instance when he bounced Murali Vijay twice then slid one across him for a catch behind the stumps, he was his old lethal self. Other times, he was less than dangerous. It might take the left-armer some time before he finds his former self.

Peter Siddle was unwell and ineffectual as a result, spending quite a bit of time off the field.

The Australians have two days to make a fist of it. It cannot be easy – remember Faf du Plessis holding them out two years ago – but Clarke has the bowling attack to winkle its way to a win. And on a track that looks quite subcontinental in character, Nathan Lyon has become the pivotal man in the equation.