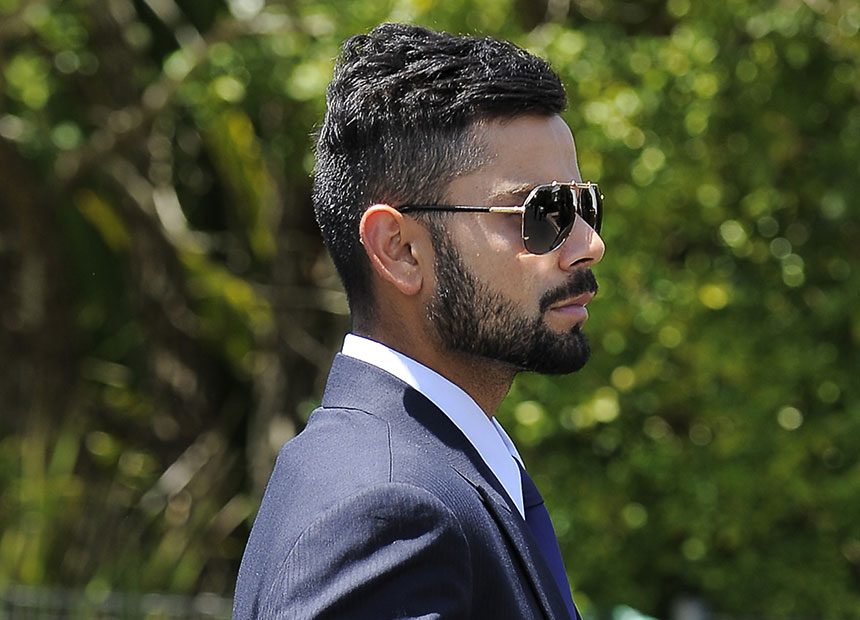 Captain Virat Kohli will be a key player as India looks to extend its 19-match winning streak.

Nathan Lyon provided positive spin on a largely laborious third day for Australia, as India fought back in the first Test to be 5-369 at stumps.

Skipper Michael Clarke declared at 7-517 before the start of play at Adelaide Oval on Thursday, with the tourists trailing by 148 runs at the end of day three.

Every Indian batsman made a start, with Murali Vijay, Cheteshwar Pujara, Ajinkya Rahane and stand-in skipper Virat Kohli all passing 50.

• An innings of rare heroism, and a glimpse of the future
• Martin Blake: David Warner’s finest hour

Kohli made it two centuries from as many Tests in Adelaide.

He departed for 115 in the third last over of the day, steering a bouncer from Mitchell Johnson to Ryan Harris at fine leg.

Johnson, who earlier struck Kohli’s helmet, peppered Wriddhiman Saha with more short stuff but the keeper made it to stumps alongside Rohit Sharma (33no).

Even Kohli struggled at times against Lyon, who regularly threatened India’s batsmen.

Lyon’s best effort came in the final session – a sharp-turning ball that reared at Rahane violently.

Rahane was bamboozled, looking to his left before realising the edge had instead floated to Shane Watson at first slip.

“Unplayable … it has spun and bounced outrageously,” Shane Warne said, while calling the game for the Nine Network.

“It’s insane … you just got to hope it hits your arm or something.

Lyon later had a confident lbw appeal turned down when Rohit Sharma was on 29.

Lyon, fresh from an underwhelming tour of the UAE where he captured three Test wickets at an average of 140, was the hosts’ most potent bowler.

It didn’t look that way early.

Vijay lashed a pair of sixes off Lyon in the morning session, with the offspinner stuck with figures of 0-34 from five overs at lunch.

He responded with an outstanding 12-over spell from the City End in the middle session.

The highlight was the wicket of Pujara for 73 in somewhat fortuitous circumstances – the ball ricocheting off the thigh, between Pujara’s legs and onto the stumps.

It was due reward for Lyon, who created plenty of nervous moments with the way he flighted the ball.

Johnson was expected to be India’s chief tormentor and he certainly lived up to that title in a sharp three-over spell at the end of the morning session.

Vijay wore one bouncer on the body and ducked under another before departing on 53, caught behind off Johnson.

The next delivery shook up both Kohli and Johnson, with the left-armer striking the badge of Kohli’s helmet.

The Australians, with thoughts of Phillip Hughes’ desperately unlucky death in their minds, rushed to Kohli’s aid.

Kohli got on with business, while Clarke comforted Johnson.

Clarke fielded despite the flare-up of his chronic injury, shifting out of the slips to better manage the three degenerative discs in his lower back.

The 33-year-old required treatment during the game and his short-term future remains unclear.

Paceman Peter Siddle was unwell, but managed to bowl 13 overs.