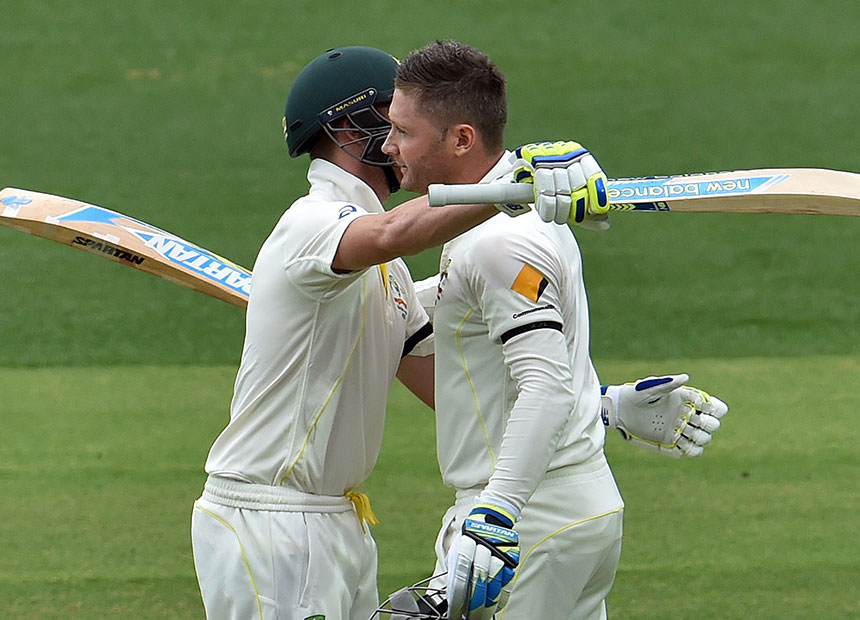 One by one, they lined up to pay homage to their little mate.

First David Warner on Tuesday, then Steve Smith, who made a slow walk out to the number 408 painted upon the Adelaide Oval’s grass, then, finally, Michael Clarke posted centuries.

• When the going gets tough, the tough get going

The Australian cricketers are doing what they can to honour the late Phillip Hughes and it is the only storyline of the first Test match. All three centurions are New South Welshmen who came through the system with Hughes in Sydney.

Warner had been scintillating on the first day, and Smith suffered nothing beside him today. Clarke’s innings was something else again, a monument to mental toughness. Clearly ailing, he willed himself to three figures and barely had enough emotional energy left to celebrate. He bit his lip, and that was about all he had left to hold it in.

Few could have expected to see the captain at all after he headed off for scans on Tuesday night, his back having failed him yet again.

But there he was in the nets on Wednesday morning, moving like a man wrapped in vines. He did it on injections in the back, and with bloody-minded refusal to yield, channelling Steve Waugh’s hundred on one leg at The Oval in 2001.

There has been no shortage of drama and bucket loads of emotion in Adelaide.

Clarke came out, kept his movements to a minimum, and – here was the irony – from his near-stationary position he found himself striking the ball much more cleanly than he had on day one.

Always fear the hobbled batsmen, they say, and who could forget Gordon Greenidge puncturing the Australians with a limp in the 1980s?

Clarke introduced a little ramp shot over gully when the Indians, inevitably, targeted him with short balls to test his movement.

He winced as he tried his customary swivel-pull because that movement forced him to rotate. Once or twice, he even used his feet and advanced to Khan Sharma’s leg-spinners, yet he never looked truly comfortable.

Clarke just found a way, eventually glancing Varun Aaron to fine leg to mark his 28th Test century, and his 10th at Adelaide Oval, a record. It was an heroic innings.

It is gratifying to see the public warm to the captain in this past fortnight as he showed more of his character than ever before.

The public is a fickle beast, and too many shallow judgements were made, too many people willing to pan him on the basis of who he was dating or what car he was driving. There was always much more to Clarke, but too few were willing or able to look deeply enough.

The next question will be about the rest of the series. Under the re-scheduling, there are three more Tests in quick time, and Clarke’s back injury is a major issue, notwithstanding his ability to play under duress today.

If he does not or cannot play in Brisbane, the selectors need to find another captain, which could pass to Brad Haddin as vice-captain, or could potentially provide them with a chance to audition the next long-term skipper.

The way Steve Smith has played and handled himself in the past 12 months, we all know who that might be.

When they were together it occurred that here was the current and future captain in occupation.

Smith has grown immensely, and he can now dominate Test bowling attacks, as he did India.

Once he reached the century, his fifth, he reverted to T20 mode, mixing cricket shots with a dab of tennis and a trifle of baseball, too. With one searing straight swat he almost decapitated Aaron in his follow-through.

The rain interrupted play three times and India fell apart in the circumstances. Poor fielding ensued, with Smith missed by the ‘keeper Wriddhiman Saha, plus twice in the field after his century, and another fell just short of two fieldsmen at mid-wicket.

The Australians might just as well declare their first innings closed and set after the win they covet. Having started the day with only a narrow advantage, they are plainly in a position to drive it home now.

A heroic knock, and a glimpse of the future