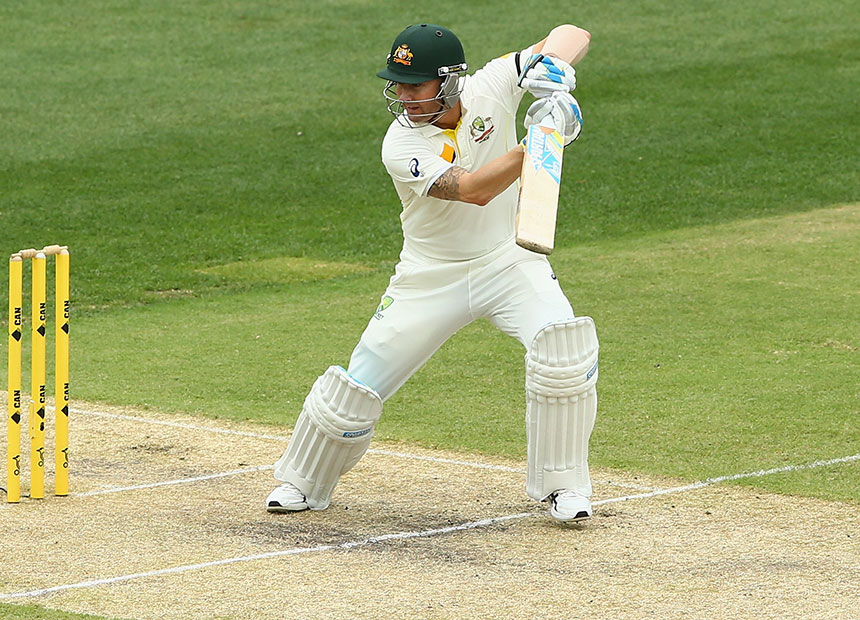 Australian captain Michael Clarke has made a remarkable return from injury to bat on in the first Test against India after having painkilling injections in his back.

The skipper took to the field at the start of play on day two, and was stuck on 98no early in the middle session as rain swept across the Adelaide Oval.

When play resumed, Clarke tucked Varun Aaron off his thigh pad for a single to bring up his 28th Test century – one of his most memorable.

Earlier, Steve Smith brought up his fifth Test ton. He walked over to the late Phillip Hughes’ Test cap number 408 written on the turf to celebrate his century.

The 25-year-old then shared an embrace with Clarke, before the pair had to come off.

Clarke was forced from the field shortly before tea on Tuesday after evading a short ball from Ishant Sharma.

The skipper made the decision to bat on Wednesday after a net session, despite Australia’s team physiotherapist Alex Kountouris admitting the captain was “struggling”.

“Unfortunately it’s quite a significant back injury,” Kountouris said before play.

Clarke was clearly restricted – there was no trademark fancy footwork and he limited his shot selection to minimise twisting at the crease.

The 33-year-old grimaced regularly, but India failed to make the most of overcast conditions after Australia resumed day two at 6-354.

Clarke’s running between the wickets was understandably slow, but he and Smith kept the scoreboard ticking over with a handful of sweetly-timed boundaries.

Rain was set to delay the game at 11.26am local time, when the umpires called for the covers before changing their mind.

Shortly after, they had no choice as heavy rain started to soak the pitch.

Clarke has three degenerative discs in his lower back and every shot caused a clear pang.

“He’s showing a lot of courage … he’s trying to shield the tail from the second new ball and he just wants to be out there,” Shane Warne said while calling the game for the Nine Network.

“Some (strokes) are going to hurt a lot more than others, but he’s in a lot of pain.”

But Kountouris believed his current woes were unrelated to the hamstring issue.

“This is his right lower back. This is his old injury, what he’s had in the past,” he said.

“I don’t think it’s directly related to his hamstring, because it’s the other side.

“We believe it’s related to his old disc injuries. With that comes a lot of muscle spasms and other things that cause pain.”

Michael Clarke makes a century for the ages