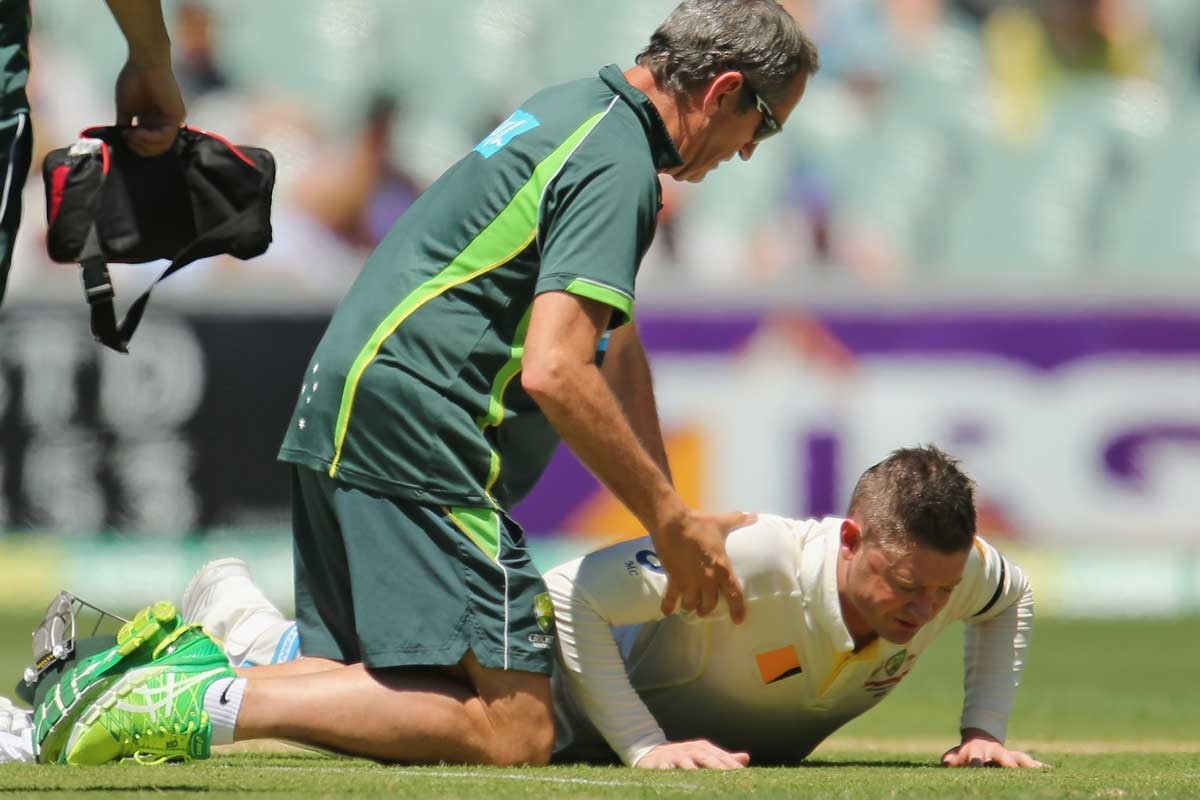 It was a troubling sight, though in the post-Phillip Hughes landscape describing it as such seems preposterous.

Australian captain Michael Clarke was trying in vain to stretch out his troublesome back shortly before tea on day one of the first Test against India.

He’d looked comfortable on the way to 60, until he rotated his torso a little to evade an Ishant Sharma bouncer. His reaction was immediate and painful.

He slumped to his knees, then rolled onto his stomach in a bid to stretch it out as team doctor Peter Brukner and physio Alex Kountouris rushed onto the field.

Clarke leaned on Kountouris for support and grunted in pain, before making a long, slow walk off the Adelaide Oval.

Perhaps we should have expected as much – the load the skipper has been bearing over the past couple of weeks has been immense. Maybe something had to give.

With the Hughes tragedy so fresh in the memory, the sight of the distressed Australian skipper lying on the ground trying in vain to get up was an eerie echo, though thankfully with far lower stakes.

Clarke’s availability for the Test had been the big cricket story until the tragic events at the SCG two weeks ago rendered it meaningless. Now, the state of his lower back/hamstring is suddenly front and centre once again.

Repeated hamstring strains had been the cause for much of the skipper’s woes this year, but Kountouris said last month the back made treating the issue more difficult.

“He’s got a sore back, an aggravation of his back, and the two are tied together which makes it quite complex,” Kountouris said.

Clarke said a year ago, during another flare-up, he wanted to play for at least another five years.

“I won’t be retiring, not for a long time,” Clarke said.

“I feel as fit and healthy as I’ve been for a long time and my love and drive to have success and be a part of this Australian team and New South Wales team is as strong as ever.

“As long as I’m performing, I think I’ve got a good four or five years left in me.”

But is it realistic? Australian cricket, and the game in general, is littered with men whose time has been curtailed by back problems – admittedly, most of them bowlers.

And Clarke’s back issue, which was first diagnosed when he was a teenager – features the one word professional sportsmen probably fear more than any other: degenerative.

Clarke has three degenerative discs in his lower back.

“I had my first scan at 17 that said I had degeneration in my disc,” Clarke told reporters last year.

“It’s a combination of things, my back gets irritated when I’m in flexion and I rotate.

“Sometimes with degeneration of the disc, it can flare up.”

Clarke undergoes continuous core strengthening exercises to ease the condition and has used a machine designed by the former personal trainer of Arnold Schwarzenegger.

Clarke has said the MedX machine, designed by Arthur Jones, is vital to being able to continue his cricket career.

“It is a matter of life and death for my career,” Clarke wrote in his Ashes Diary released last year.

“The sessions with my physio … on his MedX machine I regard as ‘money in the bank’.

“I sit in position in the machine while it stretches me to full flexion and full extension.

“Every second I spend there is strengthening me.

“The machine weighs too much to take around the world with me so I have to make the most of it when I am home.”

Clarke’s magnificent effort off the field in the past fortnight has no doubt prevented him from doing some of the physical work he normally undertakes on his problem areas.

And as an elite cricketer, Clarke is entering his dotage – when niggles are harder to overcome, even without a degenerative condition.

Let’s hope the skipper isn’t lost to the sport any time too soon, and gets to call time on his own terms rather than being told by a physio he should be looking for another line of work.

Backs to the wall: how long can Clarke keep going?