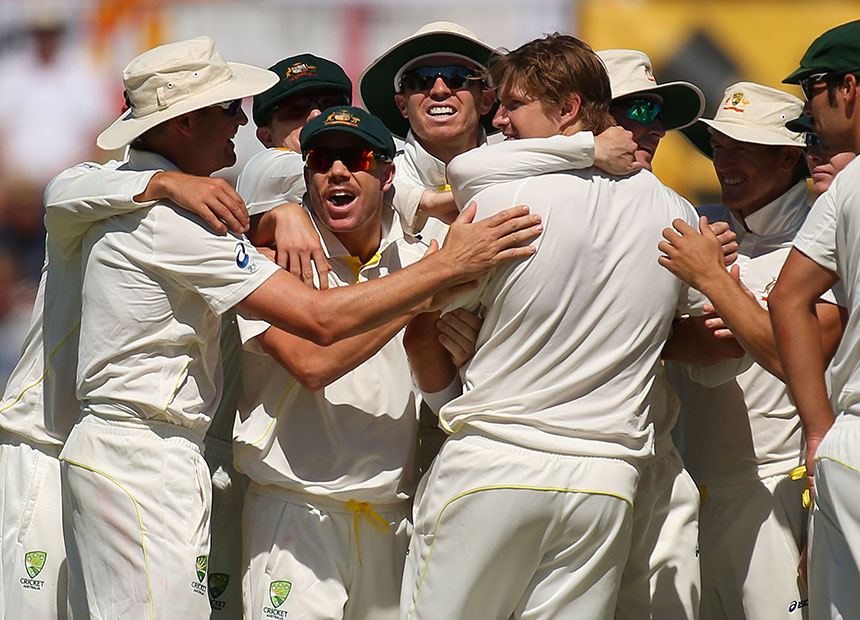 This was David Warner’s greatest day. He has many more triumphs ahead of him now that he has found a way to play with his natural aggression without compromising the value of his wicket, but this will be hard to top.

A fortnight ago Warner parked himself on the medical transport vehicle to help escort a fallen Phillip Hughes from the SCG. He slept at Hughes’ bedside over the next day or two. In short, they were close. As recently as a few days ago, he was said to be in no state to play Test cricket. Probably, he still is not, the truth be known.

But Warner hit the first ball he faced in the first Test against India through the covers at Adelaide Oval and he was away. The time had come to move on. He slaughtered Varun Aaron, who went for 51 in his first eight overs. India tried to bowl wide of off stump to him; he flayed them through cover and point.

• Backs to the wall: how long can Clarke keep going?
• Warner posts ton, Clarke’s back flares up

When they adjusted their line, he whipped them away to leg. And all the while, he gave the impression that he was batting angry with the world, and supremely focussed at the same time. People grieve in different ways, and David Warner looked the whole time as though he was making a statement about the unfairness of his mate’s death. He was a man with intent.

At 61, he swept for two to reach 63, now enshrined as the Phillip Hughes number, the score he had reached for South Australia against New South Wales when that freak situation unfolded. Warner looked to the heavens and the crowd applauded. At 100, he pulled off his helmet, kissed the badge, looked to the heavens and then, almost as an afterthought, launched into his trademark leaping salute. The embrace he shared with captain Michael Clarke is one of the moments of Australian sport. One for the ages.

He middled just about everything until 145 when he sliced one into the outfield and he was gone. He had used up just 163 balls; the amazing thing about Warner the modern batsman is that he is perceived to have put away a few shots and matured as a player, yet he was scoring at run-a-ball for a lot of his innings … in Test cricket!

He is also averaging 49.16 after five tons in the calendar year, all the while drawing people back to the beautiful game. Compelling, is the word that comes to mind. You can’t not watch him.

Australia were in control until late in the day, when Mitchell Marsh, Nathan Lyon and Brad Haddin were removed in quick succession, and the hosts closed on 6-354.

It was a remarkable day, a dramatic day to say the least. Clarke had set the tone at the toss, telling the world: “What’s most important and what I know is my little buddy would like us doing is getting out here and playing some good cricket.”

By all reports, the Australian players are still struggling, which should be a surprise to no one. But at some point life has to go on. Beyond the dignified 63 seconds of applause at the start of the game, and the black armbands and the number 408 (Hughes’ Test cap number), it was that time. A thousand kilometres away at the SCG, Sean Abbott was playing, too, taking a wicket for his state, smiling again.

Clarke looked as though he was headed for a hundred, too, after a shaky beginning, but then at 60 he shaped to hook at Ishant Sharma, changed his mind and then dropped to the deck with a back problem. This was worst-case-scenario for the captain; he could scarcely get up once he was down, yet he had scarcely shimmied to cause the problem.

Hindsight reminds us that the selectors wanted Clarke to play Sheffield Shield and prove he was fit after his most recent breakdown with the recurrent back-related hamstring tweak in the series against South Africa. In an ideal world, it should have happened. But quite clearly, cricket has been in a less than ideal place.

Right now, Clarke’s career is seriously threatened. If you are prepared to lump the hamstring and back injuries together, for one is linked to the other, his breakdowns are becoming too frequent and at some point, the team’s interests intersect and cross over. Should he have played? Well, who was going to stop him playing this one? We are not dealing with normal sporting circumstances.

The cricket was wonderful, otherwise, right to the Indians’ second new-ball fightback that left Australia struggling to extract enough runs.

Cricket just needed to take a deep breath and start playing again, to remind itself that Phillip Hughes’ death was a tragedy but also a “freak accident” as Ryan Harris called it before play.

Most batsmen who departed on an overly friendly day-one Adelaide Oval strip caused their own demise, and 20 wickets might be hard to get. Then again, some of the Australians seem to have a powerful force behind them this week.