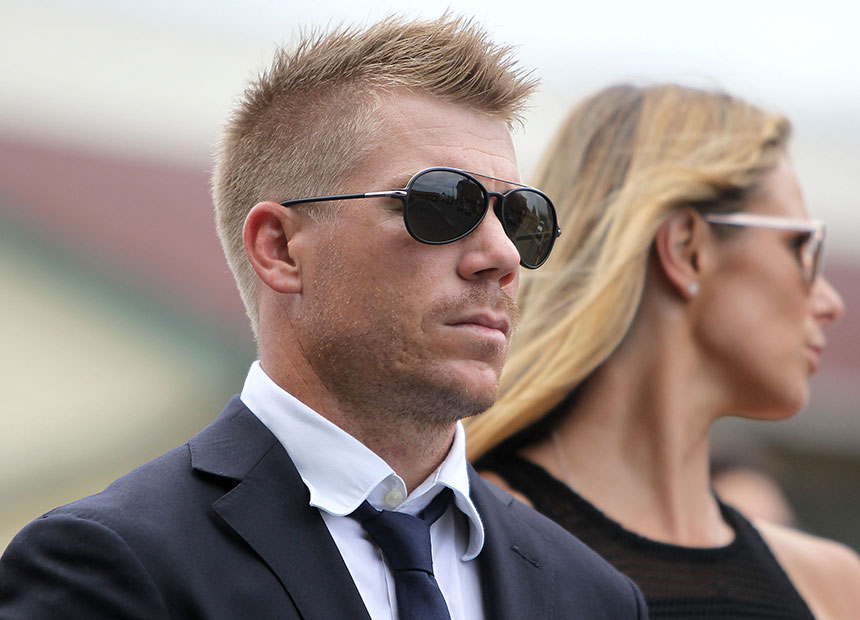 David Warner’s 145 gave Australia the early advantage in the opening clash of the four-Test series, while a crowd of 25,619 at Adelaide Oval paid tribute to Phillip Hughes on Tuesday.

Warner and Clarke shared a 118-run stand before the captain retired hurt in the 44th over, when he was sent for scans.

• After the heartbreak, it is time to play
• Abbott returns, bowls bouncer in first over

Warner was caught in the deep in the seventh over after tea, having tried to clear the rope.

Steve Smith was largely untroubled in the final session and finished 72 not out.

But India made good use of the second new ball to remove Mitch Marsh, nightwatchman Nathan Lyon and Brad Haddin in the final five overs of the day.

Smith and Warner both posed for a moment of reflection when the crowd gave them a standing ovation for reaching 63.

Hughes was on 63 when struck and fatally injured by a bouncer on November 28 during a Sheffield Shield game at the SCG.

“It’s something that was in the back of my mind. It’s going to be a special number for all of us for years to come,” Warner told the Nine Network.

“It was quite tough early on. The 63 seconds of applause (before play), getting through that national anthem – that’s when it set me off inside.

India’s stand-in skipper Virat Kohli boasted on Monday that he would be in charge of “one of the best bowling attacks we’ve had in a while”.

Mohammed Shami and Varun Aaron failed to live up to the hype after Clarke won the toss.

Shami and Aaron, who had never played a Test against Australia and tallied a combined 12 Tests prior to Tuesday, were wayward early.

Other openers may have shouldered arms when confronted with so many deliveries outside off stump.

But Warner attacked the new ball with vigour, moving to 32 after 15 balls.

The dismissals of Chris Rogers and Shane Watson, both out edging when slipper Shikhar Dhawan snaffled catches in the first session, momentarily tempered Australia’s momentum.

But Warner and Clarke continued to score freely after lunch until the captain twisted his back while watching an unthreatening delivery from Ishant Sharma sail down the leg side.

Clarke, widely praised for his leadership in a traumatic fortnight for Australian cricketers, had recovered from a recurring hamstring injury to play the game.

“It was a gamble worth taking,” Michael Hussey opined while calling day one for the Nine Network.

Clarke had looked largely untroubled throughout his innings of 60, but he grimaced in pain after avoiding a short ball from Ishant Sharma, and he looked in considerable discomfort when he hobbled off.