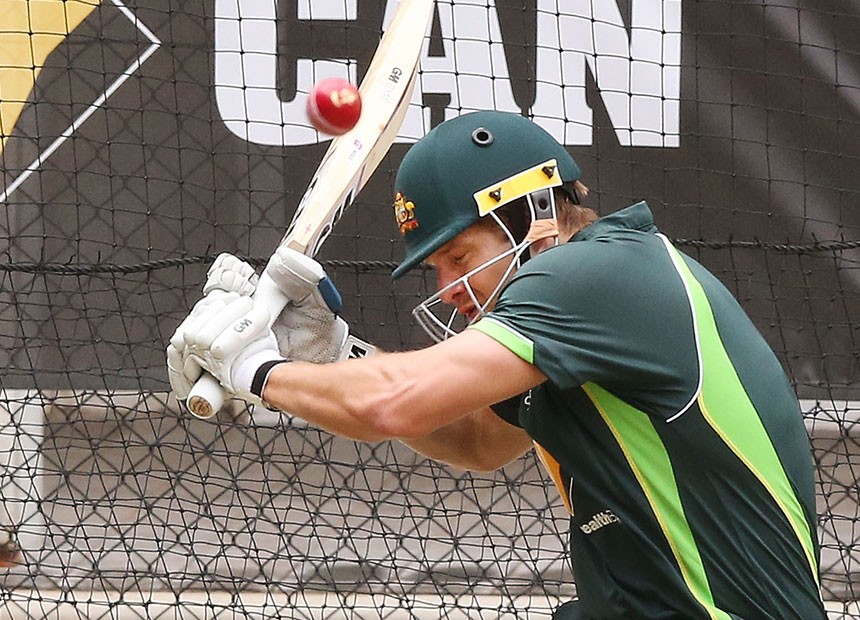 Now that Phillip Hughes has been laid to rest and the squads have assembled for the first Test in Adelaide, it is right and proper for cricket to ‘move on’.

The game, we have been told, has changed forever.

This column is not so sure.

To bounce or not to bounce, that is the question

Actually, it’s not much of a question. The answer is a resounding yes.

There was a lot of poppycock spoken about the bouncer after the freak accident that killed Hughes.

The fact is, if the Australians were to abandon bowling bouncers, we might as well all pack up and go home.

The New Zealanders, in a remarkable tribute, refrained from bowling bouncers at Pakistan in the Test immediately following Hughes’ death.

But at that stage, between Hughes’ death and funeral, the game was in a sort of purgatory or suspended animation.

By last weekend, club cricketers around the country, their black armbands from the previous week largely discarded, were back bowling bouncers, snarling, complaining about crook decisions and exchanging a yarn at the bar after stumps.

Just as they should have been.

The Hughes tragedy was a reminder to those who only see it on a two-dimensional screen of just how dangerous a sport cricket can be, not to mention the courage required to play it.

Yet it is also no doubt true that more cricketers have died from the consequences of not wearing a hat or sunscreen than from being struck by the ball.

Yes, the bouncer is a crude instrument, a missile aimed at the head to intimidate or claim a wicket or force the batsman on to the back foot.

It is an essential part of a bowler’s armoury to keep the batsman guessing.

We would be denied the electric sight of uninhibited combat between an aggressive fast bowler and an attacking batsman. Think Lillee to Richards, Donald to Ponting, McGrath to Lara, Morkel to Clarke.

It might have an element of the primeval, but the game would be anaemic without it. Batsmen rocking on to the front foot with impunity.

Unlike the New Zealanders in Sharjah, Mitchell Johnson, Ryan Harris and co. will bounce the Indians in Adelaide. No one should think less of them for it.

Now, there is a question.

One of the least edifying aspects of the game in recent decades has been the sight of fast bowlers going around the wicket and targeting the bodies of men who are incapable of defending themselves.

Cricket is perhaps the only sport in the world in which some participants are expected to perform functions at which they are, frankly, incompetent.

A tennis player might not like playing on a certain surface, but that is nothing compared to watching some No. 11 batsmen facing hostile fast bowling.

In modern cricket, pretty much everyone targets tail-enders in this manner.

It has the stench of bullying about it.

This is a tricky one, because it is the by-product of a combination of factors, none of which will go away: increased pragmatism/professionalism which has left little room for chivalry; the generally improved standard of tail-enders; and, ironically, better safety equipment, a trend that will only be accelerated following Hughes’ death.

It will be interesting to see how umpires, fast bowlers, captains and crowds respond in light of the tragedy at the SCG.

The laws of the game give umpires the power to intervene to stop dangerous bowling, and specifically invite them to take into consideration “the relative skill of the striker”.

There is not much chance that the players will mend their ways in this regard, although this would be the perfect time for umpires to step in and enforce this law.

Most likely, though, nothing will change.

Perhaps more than any other sport, cricket is a game of numbers.

In Australia, the most notorious has been 87, the so-called devil’s number on account of being 13 short of a century.

This is, of course, bunkum, as this analysis shows.

Australian cricket now has a new, far more meaningful and poignant milestone: 63, the score on which Phillip Hughes is eternally stranded.

No junior batsmen were ever so proud as those who got to retire on 63 (instead of the usual 50, as per the advice from Cricket Australia) in the round immediately following Hughes’ death.

Without descending into mawkishness, it would seem appropriate for Australian batsmen and crowds to acknowledge Hughes – and the spirit he represented – in some small way upon reaching the magic number.

The other alternative is 408, Hughes’ Test number. (Forget 64, Hughes’ one-day number, which has been retired; this does not resonate with fans.)

Perhaps we should go to Paul Taylor, the man behind the incredible moving #putoutyourbats social media campaign, for advice.