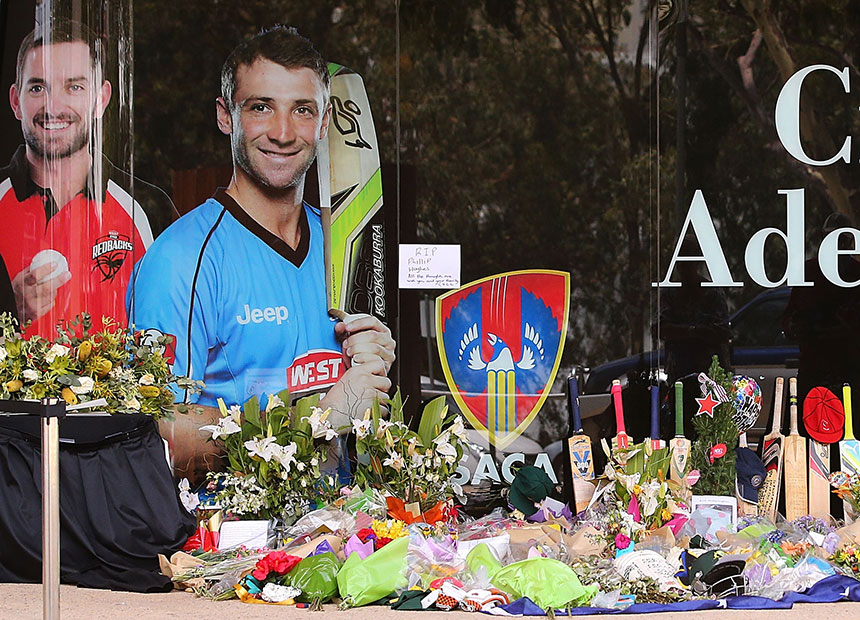 Cricket Australia want the first Test to be a celebration of Phillip Hughes’ life, asking fans to stand for 63 seconds of applause rather than a minute’s silence.

It will be a sombre affair, with the Test squad still in shock over Hughes’ tragic death.

The Australian players will wear Hughes’ Test cap No.408 on their shirts for the match, while the number will also be painted on the oval.

Both sides will observe a pre-match video tribute to Hughes narrated by commentating doyen Richie Benaud.

Spectators will then be asked to stand for 63 seconds of applause.

Hughes was 63 not out when he was struck by a bouncer at the SCG in a Sheffield Shield match.

“With the international season re-commencing on Tuesday, it is appropriate to pause once more and honour a modest hero who thrilled the nation.

“Soon after arriving in Adelaide, Phillip became a crowd favourite … this is an opportunity for those that embraced him so fondly to say goodbye.”

Players and team management will also wear black armbands, while the memorial outside the gates will be maintained throughout the match.

The pain of Phillip Hughes’ desperately unlucky death being so raw, coach Lehmann said it was a case of “time will tell” whether the Australians would play with their characteristic aggression.

But all-rounder Shane Watson made it clear on Sunday that Australia would be just as aggressive with bat and ball as they were in last summer’s 5-0 Ashes thumping.

“That’s not going to change because that’s when we’re at our absolute best,” he said.

In fact, he said the 4-0 drubbing India handed out to Australia in the last series between the sides – when the touring Australians were hit by internal divisions and ‘homeworkgate’ – would drive the home side.

“They hammered us in their conditions so we have a lot to give back to them in our conditions,” he said.

“They certainly let us know that they were on top of us in that series.

“We need to make sure they feel a similar pain as we did over in India.”