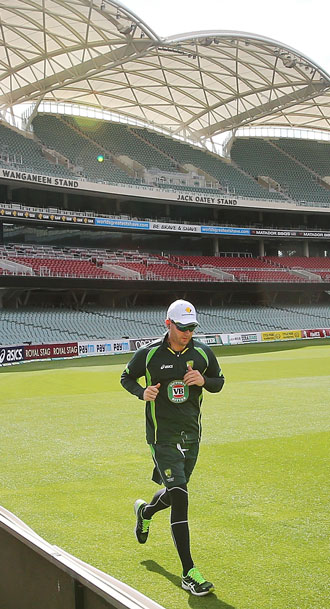 Brad Haddin is yet to contemplate captaining Australia’s Test side, with all signs pointing to Michael Clarke taking the field at Adelaide Oval on Tuesday.

Clarke joined the squad on Friday evening, as he seeks to return from a recurring hamstring injury when the rescheduled first Test against India starts next week.

Clarke had a hit in the nets on Saturday morning, then ran some laps of Adelaide Oval as the side prepared for an afternoon training session.

The Test players remain in mourning after the shock death of Phillip Hughes and they all want Clarke, a rock for the side over the past fortnight, to be there on day one.

Shaun Marsh has been added to the squad as a shadow batsman, but Haddin was upbeat Clarke would be passed fit in the next few days.

“Michael had a good hit today, he’s going to back up this afternoon and be involved in our session,” Haddin said prior to training.

“I haven’t thought about it (captaining Australia in the absence of Clarke) to be honest.

“All signs are that he is going in the right direction and we’re like everyone else, we want Michael out there.”

As for whether Haddin will feel up to playing the first Test given the traumatic events of the past fortnight, the wicketkeeper was succinctly confident.

Haddin has had to overcome his own injury issue to take part in the opening chapter of the four-Test series.

The 37-year-old hurt his shoulder during the side’s Test series against Pakistan in the UAE.

He returned a week and a half ago, but it was in the abandoned Sheffield Shield game where Hughes’ life was cut short.

Despite the lack of match practice, Haddin felt ready for five days of Test cricket.

“I wouldn’t have come back to play if I wasn’t confident in it,” he said.

“I’ve got no ill effects. All systems go.”