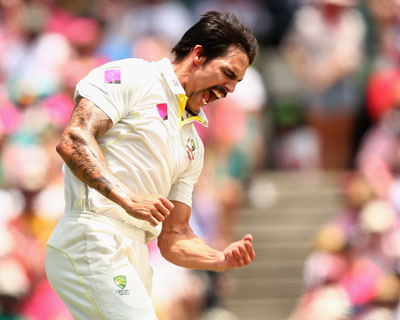 There was laughter, can-can lines and even the odd bouncer as Australia started their preparations for the four-Test series against India.

Training together for the first time since Phillip Hughes’ tragic death, the Test squad maintained a front of normality on Friday.

Routine hijinks and questionable dance moves caused no shortage of guffawing as players warmed up at a suburban oval on the fringes of the Adelaide CBD.

Soccer ball juggling came first, with the standard debate over who was at fault when the ball hit the ground.

Fielding drills were next, the four fast bowlers breaking away to one group.

They laughed with Peter Siddle when the Victorian overshot the mark with his return, the ball skidding along the car park and bumping a vehicle.

Then came the serious business.

David Warner was among the first batsmen to shuffle into the nets.

Even then, spirits remained remarkably high.

Marsh grabbed a baseball mitt and reprised his wicketkeeping days for a short time before being replaced by fielding coach Greg Blewett.

Both Marsh and Blewett understandably struggled to read the pacemen’s deliveries.

The bouncer slowly came into fashion, although Johnson bowled a fuller length for most of the session.

Hazlewood fired one in that flew over Shaun Marsh’s head, but it was Siddle that truly stepped up.

He sent down a terrific short ball, Marsh quickly ducking under.

Chris Rogers was not so lucky, a rising delivery from Siddle inflicting some serious pain when it thumped his body.

It was remarkably normal.

Five days of Test cricket is obviously a significantly different proposition to a run in the park.

Australia coach Darren Lehmann reaffirmed that players will be given time to decide whether they’re mentally up to playing at Adelaide Oval on Tuesday.

But the early signs suggest the fear of mass withdrawals was unfounded.

“I reckon you’ll get a pretty good indication of how they’re going today,” Lehmann said prior to training.

“(The squad is) getting on with what we do well and that’s play cricket.”