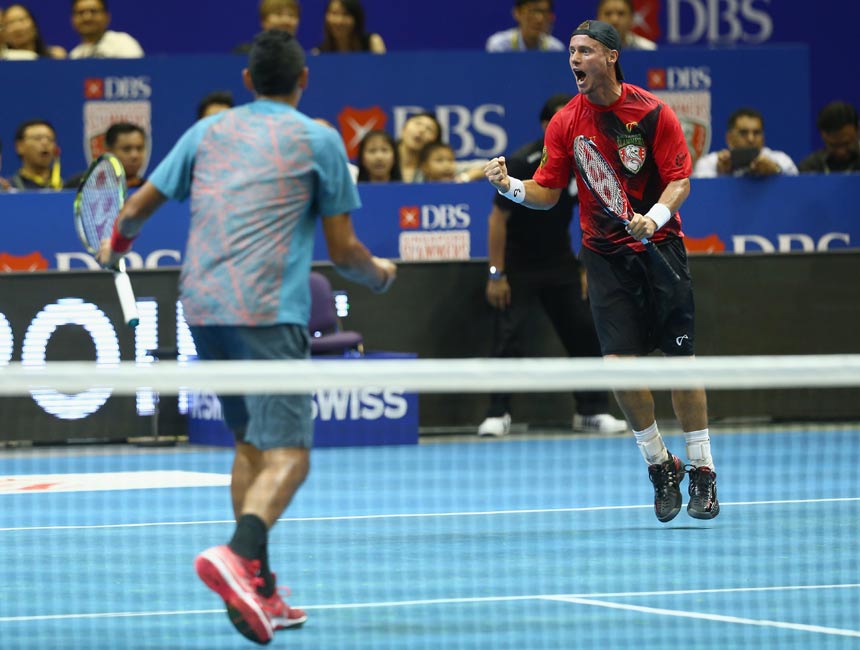 Regardless of distance, the sudden death of cricketer Phillip Hughes touched the hearts of Australians around the world, including tennis player Lleyton Hewitt.

An emotional Hewitt, renowned for his on-court tenacity, dedicated his International Premier Tennis League win in Singapore on Wednesday to Hughes as the cricketer’s funeral took place back in Australia.

• What they said: touching tributes to Phillip Hughes

“There’s a lot of people hurting back in Australia today with the funeral of good friend Phillip Hughes,” Hewitt said after his men’s doubles win with fellow Australian Nick Kyrgios.

“Nick and I want to obviously dedicate this win tonight for [sic] him.”

Hewitt said he watched all of Wednesday’s memorial for Hughes, whose death in a freak accident while batting plunged Australia into mourning.

Hewitt and Kyrgios’ win helped their team, the Singapore Slammers, to a first victory of the new International Premier Tennis League.

But Hewitt, 33, said his thoughts were in Australia as the country ground to a standstill for Hughes’ funeral in his hometown of Macksville.

“I sat and watched the whole funeral – it was one of the toughest things I’ve sat through,” Hewitt said.

“I can’t speak how tough his family and friends are doing at the moment and the Australian cricket team but it’s really knocked the whole nation, not just the sport but the people in Australia as well.

“But this is when people have to come together, to come as one and I’ve been really proud of our country.”

Serbia’s Ana Ivanovic, who has family in Melbourne, said she had also been affected by Hughes’ death after he was struck by a cricket ball last week.

“It’s really sad to see. It makes you think a lot – you would dedicate your life to your sport and live a healthy life and then something like that happens. It’s scary,” she said.