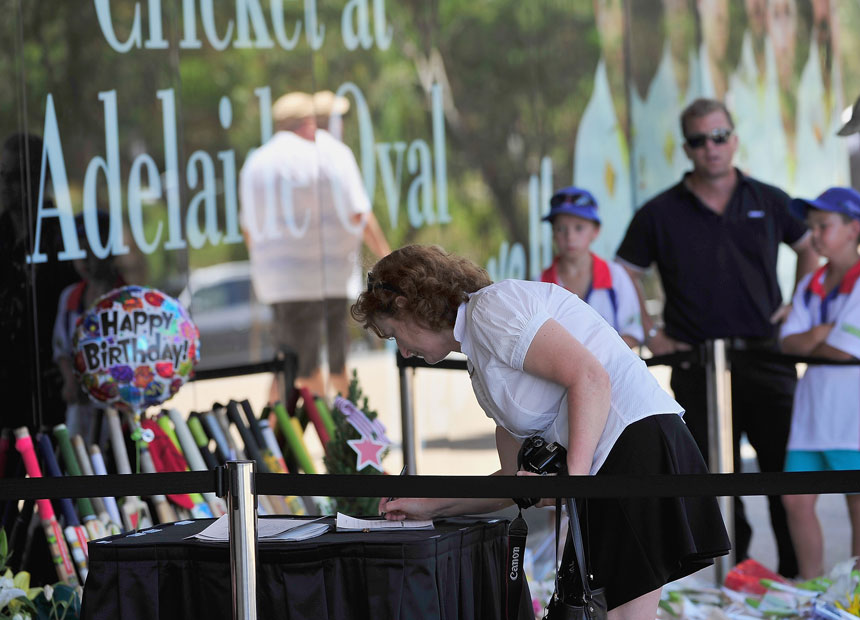 As the nation remembers Phillip Hughes, mourners gathered at several stadiums around Australia to remember the late cricketer.

About 3000 people attended a screening of Hughes’ funeral service at Adelaide Oval, where he played Shield cricket for the Redbacks for two years.

Fans took to the field after the service to leave flowers, cards and cricket gear at a makeshift shrine for the 25-year-old.

Marion Bahr, 73, from Hackham, said the service in Hughes’ home town of Macksville was an ideal way to celebrate his life.

She said she came to the screening at Adelaide Oval to pay her respects to a young man taken far too young.

“To see a young man, not much younger than my son, tragically taken from life so soon … it’s very sad,” she told AAP.

“I just wanted to be here.”

Ryan Brown, 18, from Wynn Vale, said he had been to Adelaide Oval many times but had never seen it so quiet.

“It really does break my heart,” he said.

Now paying our respects inside the pickets in the middle of Adelaide Oval. #RIPPhillipHughes #63notout pic.twitter.com/njfh33ul4E

“It’s the first time that I’ve come here and there’s just this silence.”

David Parsons, 81, from Clovelly Park, has been a cricket umpire for the Sacred Heart College First XI for the past 21 years.

He said his thoughts were with the family of Hughes but also Sean Abbott, who delivered the bouncer that struck the popular cricketer.

“You still can’t come to grips with the possibility of such a thing happening,” he told AAP.

“My heart bleeds so much for young Abbott, particularly today.

“I just hope that over the years he’s strong enough within himself to come back and play the game again. It’s such a tragedy all the way around.”

Meanwhile, in Sydney, a line of 63 cricket bats, each inscribed with a special moment from Hughes’ life, were installed at the SCG.

The ground was opened to the public for a live broadcast of Hughes’ funeral.

A fence, photo memorial, flowers and cricket gear were laid behind the stumps.

The pitch and surrounding centre square were cordoned off as a mark of respect.

Each bat, with a cap on top, has had a photo of Hughes and memory laser etched into it.

Hundreds of people also gathered at the WACA in Perth and Gabba in Brisbane to watch the televised memorial service.

WACA officials opened the gates for people to watch the funeral televised from Macksville on the stadium’s big screen.

Men in business suits mingled with young children and local cricketers under the harsh WA sun on the WACA playing surface and in the stands.

If you want to join us to remember and celebrate the life of Phillip Hughes, Gate 2 of the WACA Ground is now open. pic.twitter.com/ubf8pIhnGx

Outside the main gates, flowers and cricket bats were displayed as a memorial to the young cricketer who had been tipped to re-join the national team.

Mourners were invited to sign condolence books housed in the WACA Museum, which will be later provided to the Hughes family.

“The loss of Phillip has touched so many people and left us all with a profound sense of sadness,” WACA CEO Christina Matthews said.

The service included eulogies from Hughes’ brother Jason, and sister Megan, and a tribute from Australian Test captain Michael Clarke, who was one of the pallbearers.