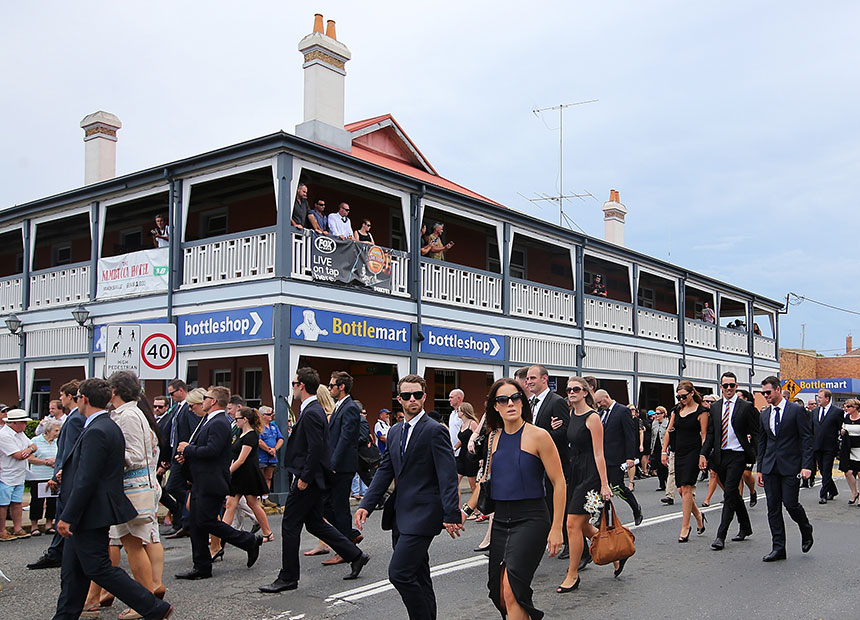 The small, steamy town in northern New South Wales, quietly going about its business just over a week ago, has tearfully joined the list of cricket’s sacred sites.

• In pictures: a town says goodbye
• What they said: touching tributes

They made their pilgrimage by the plane load for the funeral of Phillip Hughes, some of cricket’s biggest names: Warne, Lara, Hadlee, Ponting, Gilchrist.

Yet it was Macksville, the town that shut down for a day, and the spirit it embodies, that reminded us of the essence of the game; that made it real.

As Cricket Australia chief executive James Sutherland said, the notion of a young country boy dreaming of wearing the baggy green is a foundation myth of Australian life, part of the national psyche.

For all the glitz of modern cricket, for all the fancy suits and stylish partners who descended from the city, the condolences from the likes of the Queen and Elton John, this was a quintessentially Australian country funeral.

It was conducted by the local Catholic priest, Father Michael Alcock, in the Macksville High School sports hall, just down the road from St Patrick’s, where Hughes was baptised in 1993, and where his parents Greg and Virginia were married.

Prime Minister Tony Abbott and Opposition Leader Bill Shorten slotted in anonymously among locals fanning themselves with the order of service.

Outside, hundreds more watched from a nearby oval. The whole town was invited; the whole town turned up. It was never in doubt.

Some of them were name checked in the eulogy from Hughes’ cousin Nino Ramunno who told of “hundreds if not thousands of games of backyard cricket held in the various backyards of East Street Macksville”.

They played at the Lonergan’s, the Martine’s, the Laverty’s, the Bartlett’s and the Ramunno’s.

When night descended, Phillip and his brother Jason would continue under lights at their place.

In the time-honoured manner, they would toss the bat to decide who would bat first.

“If Phillip lost the toss he would simply say ‘best of three’, ‘best of five’, ‘best of seven’, ‘best of nine’ and so on. Until he won, and of course he chose to bat,” Ramunno said.

“In the end Jason rendered the toss a waste of time and accepted that he would be bowling – a lot.”

A career was born.

Jason, who developed into a formidable grade cricketer after following his younger brother to the bright lights of Sydney, paid tribute to his “bra”. “I bowled to you for hours and even though my body is tired and sore I’m very glad I played a major part in you achieving your dreams.”

Hughes was a hero to thousands, his siblings among them. Sister Megan spoke of “the most amazing brother I could ask for”.

He became used to midnight calls from Hughes from around the cricketing world, demanding that he send him a photograph of a particular cow or bull.

Hughes was never so happy as when talking cattle: “I’m happy Corey Ireland, I’m all teeth,” Hughes would tell him.

Michael Clarke described how, at critical times in a partnership, his little mate would pass on “a useless fact about cows”.

The Australian captain was highly emotional during his eulogy, verging on the metaphysical. He spoke both of Hughes’ spirit, which he believes is still with him, and of the spirit of the game.

Hughes, by virtue of his spirit, had revitalised the latter, he said.

“Is this what we call the spirit of cricket? From the little girl in Karachi holding a candlelight tribute, to masters of the game like Tendulkar, Warne and Lara showing their grief to the world. The spirit of cricket binds us together.”

This applied universally, from the 12-year-old boy in Worcester, to Brendon McCullum in Dubai, to the person who had never met Hughes but laid flowers at the gates of Lord’s.

“Phillip’s spirit, which is now part of our game forever, will act as a custodian of the sport we all love. We must listen to it, we must cherish it, we must learn from it.”

Call it the spirit of Macksville.