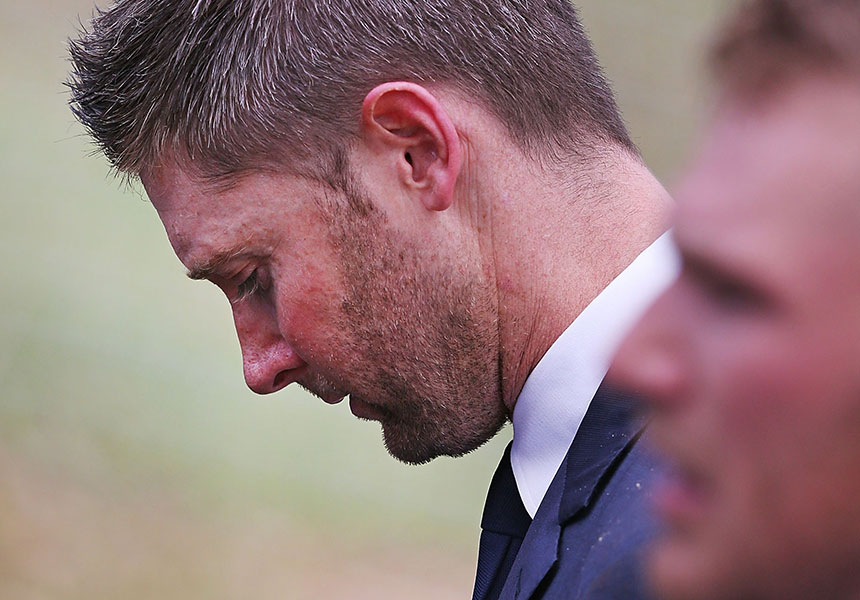 The funeral for Australian cricketer Phillip Hughes – killed by a bouncer last week aged 25 – has been held in the northern NSW town of Macksville.

The funeral, held in the Macksville High School sports hall, was started with the song Forever Young, by Youth Group.

The hall was packed with locals and cricketing identities. Prime Minister Tony Abbott was in attendance.

• In pictures: Australia farewells Phillip Hughes
• After Hughes: why the game will never be the same

The funeral was conducted by Father Michael Alcock.

“That’s what we’re doing here this afternoon, to give God thanks for Phillip Joel Hughes,” Father Michael said at the commencement of the service.

On a stifling day in Macksville, many in attendance fanned themselves with the order of service.

“Living in a warm climate like this, it breeds tough, resilient people,” Father Michael said.

“And certainly we have needed that over the past week.”

Hughes’ cousin Nino Ramunno described his introduction to cricket, at the behest of his brother Jason.

Jason Hughes read a letter to his brother. “All I ever wanted was for you to look up to me as your big brother,” he said.

“My promises to you, firstly I’ll take care of mum, dad and Megan and of course your beloved cows.”

Friend Corey Ireland spoke of Hughes’ love of cattle, and his desire to settle down one day.

“He was so excited about the thought of one day getting married and having kids,” he said.

“There is no doubt he would have been an outstanding father, he was a big kid at heart, yet in control of what he wanted to achieve.”

Australian captain Michael Clarke fought back tears as he paid tribute to his friend.

“He was so proud of Macksville and it’s easy to see why today,” Clarke said.

“I don’t know about you but I keep looking for him. I know it’s crazy but I expect any minute to take a call from him, to see his face pop round the corner.

“We must dig in and get through to tea, and we must play on. So rest in peace little brother.”

Hughes’ father Greg was a pallbearer, and he wept as he helped carry his son’s coffin out of the hall to the sound of Elton John’s ‘Don’t Let The Sun Go Down On Me’.