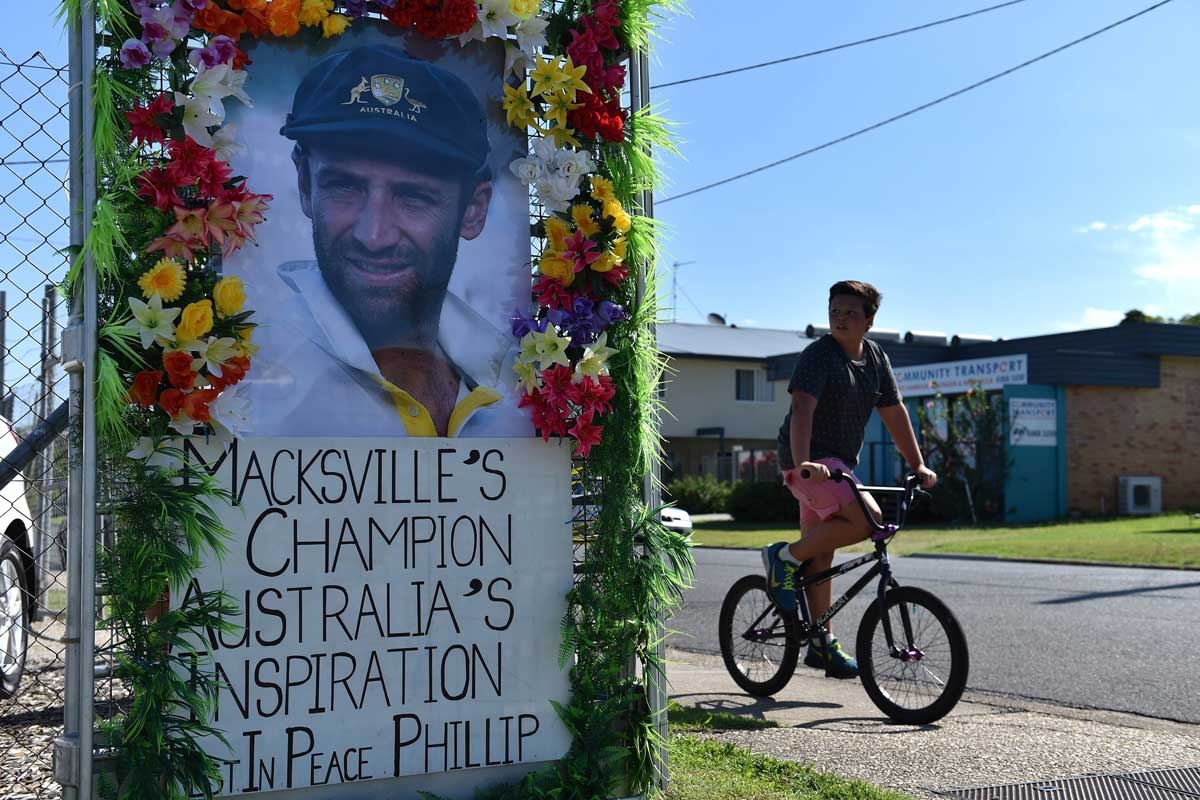 A nation’s attention will turn to a sleepy coastal town on Wednesday afternoon, as Macksville hosts the funeral of Phillip Hughes.

The population of Macksville, listed in the 2006 census as 2658, will swell as mourners from around the country descend to pay their respects to Hughes, whose life was cut tragically short last week at the age of 25.

Nestled on the southern banks of the Nambucca River in northern New South Wales, Macksville will be a hive of sombre activity on Wednesday.

• In pictures: Macksville honours a favourite son
• After Hughes: why the game will never be the same
• Crowe urges Aussies to tone it down
• Kiwis lead remarkable tribute to Hughes

Cricketers have been arriving in the town since Monday, and a media hub has been established at the Girl Guides Hall to cater for the massive interest in Hughes’ funeral.

Seemingly every shop front in town is paying tribute to the cricketer.

From hair-dressing salons to century-old service stations and new cafes, all are honouring the batsman.

The tribute outside the local ex-services club, where thousands will gather for Hughes’ wake on Wednesday, said it all.

“Our Mate Phillip,” it said with a picture of Hughes in his cherished Baggy Green, and another with the opener raising his bat to the heavens after, presumably, scoring one of his three tons for Australia.

“In Memory of Phillip. Farewell from Macksville. Always in our heart,” said another.

Hughes’ family have invited the whole town to attend the funeral to celebrate his life.

About 5000 mourners in total are expected at Macksville High School.

Cricket Australia estimates between 300 and 400 dignitaries will be among them, including past greats such as Shane Warne, Ricky Ponting and Steve Waugh, the entire current NSW and Australian Test squads plus India’s stand-in skipper Virat Kohli and coach Duncan Fletcher.

National captain Michael Clarke, fellow Australian batsman Aaron Finch and Hughes’ batting partner at the time of his tragic accident, Tom Cooper, will be among the pallbearers at the funeral.

Clarke will also deliver a tribute to Hughes during the service.

“For the people who aren’t able to get into the hall, the family has made arrangements for several overflow areas at the local high school,” said Hughes’ manager James Henderson on Tuesday.

“So everybody should come to celebrate Phillip’s life. That’s what the family wants.”

After the service, which begins at 2pm AEDT, the late cricketer’s hearse will slowly make its way down the main street of Macksville, with the procession to end outside the ex-services club.

“People who are at the high school during the service are asked to line the streets and pay the most fitting farewell to Macksville’s favourite,” Henderson said.

“The family wants to see as many people as it possibly can.

“They’ve been very moved from the support that’s come from here in Australia and obviously all the way around the world, where Phil’s untimely and sad passing has affected so many people.

“They’re very proud that their son has made such an impression on people who knew him and obviously now people who have come to know him in this unfortunate circumstance.”

Four of the five free-to-air networks have cancelled regular programming to broadcast the funeral.

The TV coverage for all networks will begin between 1.30pm and 1.45pm (AEDT).

The tragedy that astounded the nation and the world has prompted an unprecedented outpouring of emotion.

On Tuesday it was revealed Australia’s ambassador to the Holy See, John McCarthy, had arranged a mass for Hughes on Tuesday night in Rome.

It’s difficult to recall the last time a funeral received such attention in this country.

Princess Diana’s was broadcast around the globe in 1997. It’s a long way from Westminster Abbey to the Macksville High School hall, but the emotions are exactly the same – disbelief that someone could be taken so suddenly and publicly.

Elton John sang that day in London – and he dedicated a song to Hughes at his Munich concert on Thursday.

Hughes’ ability with a cricket bat took him all over the world, from the MCG, to Lord’s, Johannesburg, India and Sri Lanka, but his heart was always in Macksville.

In a 2008 interview with The Land, a 19-year-old Hughes said he loved nothing more than coming home.

“Every time I get a break in cricket I like to get home and help Dad on the farm … there’s nothing better than to get back to the country,” he said.

In the same story, it was revealed Hughes’ dream was to own stud cattle, and in particular his passion for Angus cows.

Only last year he bought a 90-hectare property outside town where he had 70 head of Angus and planned to spend his post-cricket years.

“The day I play my last game I’m heading straight up to the property, I’ll tell you that right now,” he once said.

And so it proved.

‘Everybody should come to celebrate Phillip’s life’