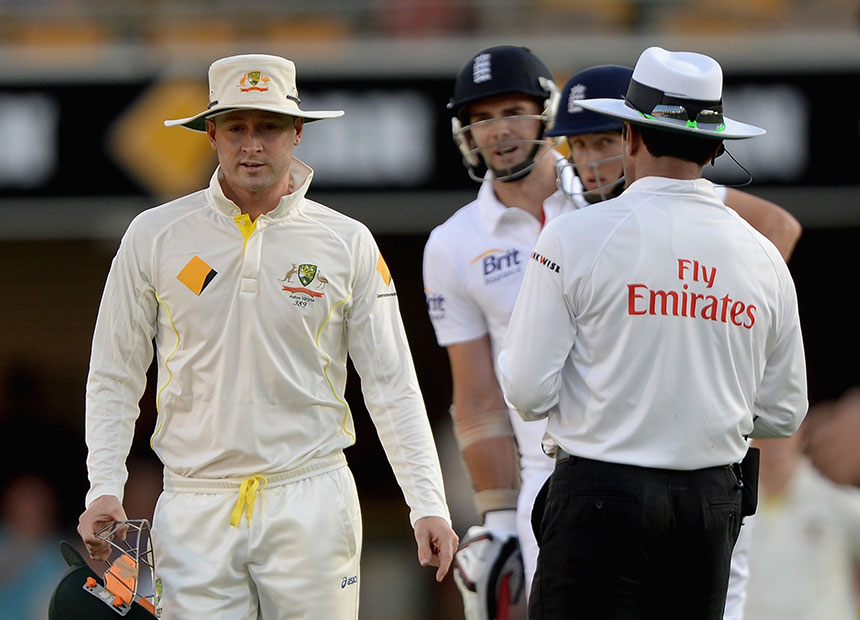 As people soul-search, rationalise and mourn the loss of a very talented and much-loved cricketer, one unpalatable fact sticks out. This was an accident waiting to happen.

Phillip Hughes’ death will change the way cricket is played.

• Crowe urges Aussies to tone it down on the field
• Bouncer to remain a legal part of cricket: ICC
• From Elton to Wolverine: Hughes tributes roll on

A week ago it was all about Michael Clarke’s ‘hammies’ and poor crowds.

Before that it was the Test debacle against Pakistan, and Clarke comically accusing Steve Smith of cosying up to an opposition batsman. Smith reassured Clarke he was just having a quiet sledge and all was well in the Australian camp.

A year ago, Clarke told Jimmy Anderson to “get ready for a broken f—ing arm” at the Gabba. Clarke’s comments to the English bowler were caught by Nine’s microphones, and the country witnessed first-hand sledging the Australian way.

Players will now think twice about threatening to knock anyone’s block off – even a No. 11. Quick bowlers will think again about the bouncer angled into the batsman’s body. Maybe they will even stop bouncing tail-enders.

In coming years, the game will be delineated by Hughes’ death. There will be before Hughes and after Hughes.

Freakish or not, this accident was always on the cards. What made Hughes’ death so horrid was that we witnessed it.

We had seen it all before. The well-placed, head-high bouncer sent down to a batsman who is through the shot before the ball arrives. It hits him and, on this occasion, Hughes, Sean Abbott and we will never be the same.

Freakish or not, this could have happened at any time.

In the 1930 series Bradman, the greatest of them all, was struck by Larwood at the Oval and spent the next month visiting a Harley Street specialist. He just didn’t feel right and vowed never to be hit again.

A couple of years later, Larwood hit Woodfull over the heart and fractured Oldfield’s skull during the bodyline series. Such was the bad blood caused by bodyline it changed the way the game was played.

The Australians’ 1934 tour of England was under threat of being called off unless Lord’s gave assurances that the tactic would not be used again. The tour went ahead, but as O’Reilly, Fingleton and Dick Whitington all noted, after bodyline bowlers were reluctant to bounce batsmen.

Miller and Lindwall resurrected the bouncer after the war, and quick bowlers haven’t looked back.

By the mid-1970s the quick bowler was king. There were the Australian pair, Lillie and Thomson, and the West Indians, Roberts and Holding.

The bouncer was more lethal than ever and the game more combative. Gritty English wicket-keeper Alan Knott recalled facing Thomson in early 1975 on a bouncy Sydney track. It was the only time he had been scared on a cricket ground.

Knott was there on a late Saturday afternoon in 1976 at Old Trafford when Andy Roberts and Michael Holding unleashed a sustained bouncer attack against the ageing English openers, John Edrich and Brian Close. Close was in his forties and batted bare-headed. This was the moment you thought someone could be killed.

An English doctor, R. W. Cockshut, watched on. He expected “up to 10 deaths and 40 irreversible brain injuries” if cricket administrators did not ban the bouncer.

Kerry Packer’s World Series Cricket transformed the game into a gladiatorial contest. A year after Old Trafford, Packer’s poster-boy, David Hookes, had his jaw smashed by an Andy Roberts bouncer at the Sydney Showgrounds. Hookes could have been killed.

Packer had enough sense to realise batsmen needed helmets, and they changed the game.

Batsmen survived the ’80s because of the helmet.

No era in the game’s history had seen such a talented crop of quality fast bowlers. Croft, Marshall, Garner, Walsh, Clarke, Patterson, Waqar, Imran, Hadlee, Kapil Dev and a young Curtly Ambrose come to mind. Bones were broken but no one was killed.

Careers, however, were ended. On his Test debut in 1984 English batsman Andy Lloyd was ‘sconed’ by a Malcolm Marshall bouncer. Lloyd was wearing a helmet at the time, but he still spent the next week in hospital. He never played Test cricket again.

Helmets changed the way batsmen played. Without helmets they played quick bowling off the back foot. Moving back and across the wicket gave them extra time. With helmets they moved onto the front foot and attacked.

Batsmen were still ‘sconed.’ Justin Langer’s helmet was repeatedly battered. Packer told Langer he should be indebted to him. “If it wasn’t for the crash helmet you’d be dead”, Packer declared.

Before Hughes, there had been deaths.

In 1959, 18-year-old Abdul Aziz was killed while batting for Karachi. Promising batsman-wicketkeeper Martin Bedkober was also killed in a Brisbane grade game in 1975. He was a flatmate of Jeff Thomson’s.

Neither Aziz nor Bedkober were hit in the head. Like Woodfull, they were struck near the heart. Both had pre-existing heart conditions.

Former Indian international Raman Lamba was killed in a Bangladeshi club game in 1998. Fielding in close without a helmet he was struck in the head.

Last year, South African Darryn Randall died after being struck in the temple in a club match.

Before Hughes, there were serious injuries.

Nari Contractor had his skull fractured by West Indian fast bowler Charlie Griffith in 1962. Contractor lay in a coma for six days.

New Zealand number 11 Ewan Chatfield was revived after being struck in the head by English quick Peter Lever in 1975.

Before Hughes the signs were there. Earlier this month, New South Wales batsman Ben Rohrer was struck in the head at the MCG. As he stated last week in the Sydney Morning Herald, he’s “still struggling.”

A week after Rohrer, Pakistan’s Ahmed Shehzad had his skull fractured in the First Test against the Kiwis. Like Hughes he was through his shot. Unlike Hughes, he was struck on the helmet.

Since Hughes there has been another death. Last Saturday, the Israeli umpire and former national captain Hillel Oscar was killed after being struck in the jaw by a ball in a club game in Ashdod. His is the fourth cricketing death in the last 18 months.

There’s probably enough ‘freakish’ accidents now to provide reasons why Hughes died. A cricket ball hitting certain unprotected parts of the head or body has the potential to kill.

But who cares about reasons at this stage?

Hughes’ death is just too raw, sudden and shocking. It’s etched on the faces of the players, officials and journalists who knew and admired him.

Throughout this week Michael Clarke has been admirable. He became the captain we needed him to be.

Never has an Australian captain been called upon to do what he did this week. In the truest sense, he was and is Hughes’ mate. Like a mate, he stayed with him till the end.

As Gideon Haigh so eloquently put it: “Cricket was seen at its best, in the shadow of its worst.”

But you can tell by Clarke’s face that he and the game will never be the same after Hughes.

After Hughes: why the game will never be the same