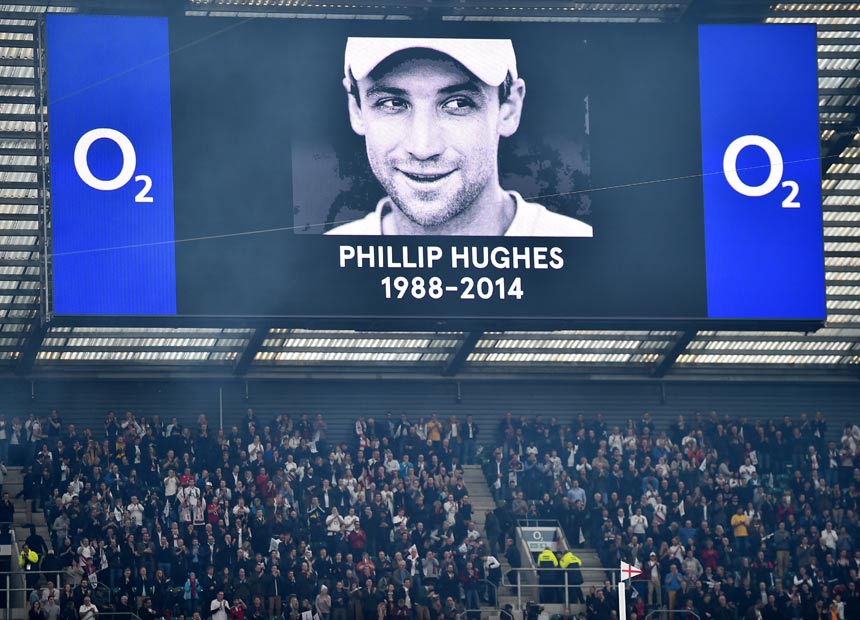 A Pakistan-New Zealand Test match in Sharjah would normally be so low on the list of Australian sporting priorities as to be anonymous.

• Phoenix striker remembers Hughes, scores hat-trick
• Elton: ‘This is for you Phil, wherever you are’

Yet anyone wishing to comprehend the outpouring of grief following the death of Phillip Hughes would be well advised to watch the extraordinary video in this report entitled ‘wickets fall in silence’.

It is the clearest indication of the profound effect Hughes’ death has had internationally.

Having cancelled play on Thursday out of respect, the match resumed amid moving scenes in which players on both sides openly wept during a tribute to Hughes.

Skipper Brendon McCullum, who has played alongside Hughes, read out a generous statement on behalf of the NZ side, and made it clear that his amazing double century meant little.

And every NZ player scribbled ‘PH’ just under the silver fern logo on the left breast of their shirts.

But what happened next was even more remarkable.

New Zealand proceeded to take a succession of wickets which it refused to celebrate. It was an almost ghostly performance.

What’s more, not a bouncer was bowled. “That’s just what we wanted to do to show some respect,” explained coach Mike Hesson.

Football puts out its bats, too

In the A-League, inter-code rivalry was put aside as tributes were paid and crowds burst into sustained applause at the 63rd minute of matches, acknowledging Hughes’ score when he was felled.

Overseas, Australian soccer stars Tim Cahill and Mile Jedinak both scored, the former kissing his black armband after his goal for the New York Red Bulls.

Crystal Palace captain Jedinak and Reading FC goalkeeper Adam Federici both laid a bat on the turf before their respective games.

In Sydney, a cricket bat was placed on the ninth tee (63rd hole) at the Australian Open where golfers, including Adam Scott, wore black ribbons on their caps.

Meanwhile, back home in Hughes’ home town of Macksville …