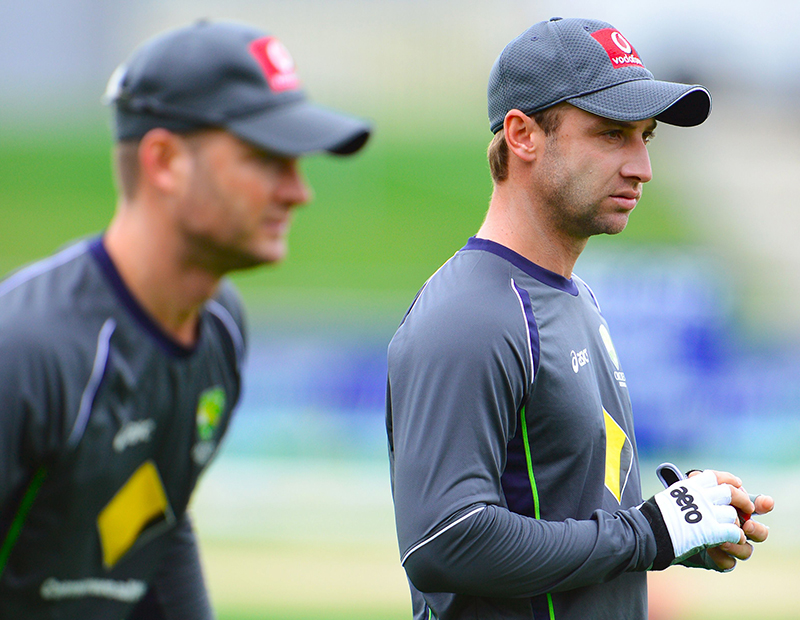 A day after fighting back tears in an emotional statement to the press, Michael Clarke has opened up about the death of close friend Phillip Hughes in a newspaper column.

Clarke was commended far and wide on Saturday when he read a prepared statement on behalf of the national cricket team and support staff at the SCG.

“I don’t think in 12 years of playing cricket at the top level I have ever come across a more loyal or generous-hearted teammate,” Clarke wrote.

“If he had a tough conversation with a selector he would nod, agree he needed to work harder, grin because he felt bad for the person delivering the message and then get on with it.

“You knew deep down he was shattered because playing cricket for his country meant everything to him.

“That his career, and his life, was cut short in his prime is incredibly unfair.

“I don’t have a blood brother, but I am very proud to have called Phillip my brother. I am a better man for having known him.

“Vale Hugh Dog. I will miss you forever, but I will not forget.

Clarke posted on Twitter that it “has been the hardest few days of my life”.

Clarke’s leadership during such a tragic time for the cricket community has been widely praised, with Cricket Australia team doctor Peter Brukner and chief executive James Sutherland both thanking him in recent days.

Happy bday bro. Will love you forever. It has been the hardest few days of my life.

.@Anita_Jacoby: Very potent saying from Michael Clarke: “One crowded hour of glorious life is worth an age without a name” #PhilHughes

“Michael Clarke is Pharlap. All bloody heart. That statement would’ve been tougher than any innings. Plenty of pain & love right there,” Paralympic gold medallist Kurt Fearnley posted on Saturday, one of many moved by Clarke’s words.

Clarke also wrote of the support forthcoming for Sean Abbott, the allrounder who delivered the ball that struck Hughes on Tuesday.

“Not one single person blames him in any way for what has happened. He deserves our full support,” he noted.

“He will absolutely have mine whenever he needs it, and I know that also goes for the entire Australian cricket community.

“Sean, when you feel like getting back on the horse mate, I promise you that I will be the first to strap on the pads and go stand up the end of the net to hit them back at you.

“It’s exactly what Hugh Dog would want us both to do.”

The first Test between Australia and India was delayed on Saturday to ensure players could attend Hughes’ funeral in Macksville on Wednesday.

The game could be abandoned, or potentially start on Friday or Saturday.