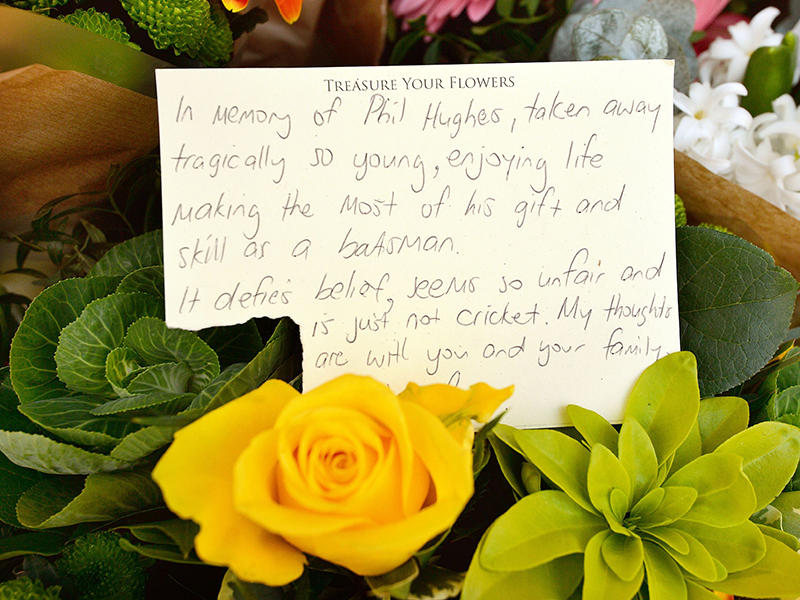 Queen Elizabeth II has sent a private message of condolence to the family of deceased cricketer Phillip Hughes.

The Queen conveyed her sympathies to Hughes’s family last night.

Hughes was felled by a bouncer at the Sydney Cricket Ground on Tuesday and died in St Vincent’s Hospital from a severe and rare head injury on Thursday.

Players attended a sombre gathering at the SCG on Thursday night to reflect on the loss of their mate who had played 26 Tests for Australia.

Australia House’s flags flew at half-mast in London in a tribute to Hughes, and the high commission has received countless messages of support for the deceased batsman.

Hughes played for three county sides in Middlesex, Hampsire and Worcestershire between 2009 and 2012, leaving a lasting impression in England.

A minute’s silence will be held in Hughes’s home town of Macksville in northern New South Wales tonight, as the community grapples with the cricketer’s death.

Macksville, south of Coffs Harbour, has been rocked by the death of Hughes, whose family still lives in the area.

Hundreds of people will gather on the town’s riverbanks for the Nambucca River Festival today.

“The two Rotary clubs would like to pay tribute to Phil Hughes, and invite the public to join with us in a moment’s silence. And then that will be followed by the lone piper,” he said.

The outpouring of grief from the international community reached Lord’s cricket ground, the spiritual home of cricket, where flags also flew at half-mast.

Mr Baird said the memorial would take place at the SCG, but a date and other details were yet to be confirmed.

“This service has been arranged in consultation with Phillip’s family, and it will be an opportunity for the entire community to pay their respects to a much-loved Australian and New South Welshman,” a statement from the Premier’s office read.

The future of the first Test between Australia and India – scheduled in Brisbane for December 4 – remains up in the air, with Cricket Australia chief executive James Sutherland on Friday saying Test cricket will continue only when the players are ready.

Sutherland said the matter of whether the first Test goes ahead is not a priority.

“To be honest, we haven’t broached that subject with the players yet,” he said.

“We will get there when we can.

“I suppose the starting point is they (the players) are grieving.

“They’ve lost someone that is incredibly close to them, and I think there is enough that we understand about grieving processes to know that it’s really important to give people time, and people will respond in different ways to what they’re going through.

“Six or seven days is not a long time, but right now with where we all are, it seems like a million miles away.”