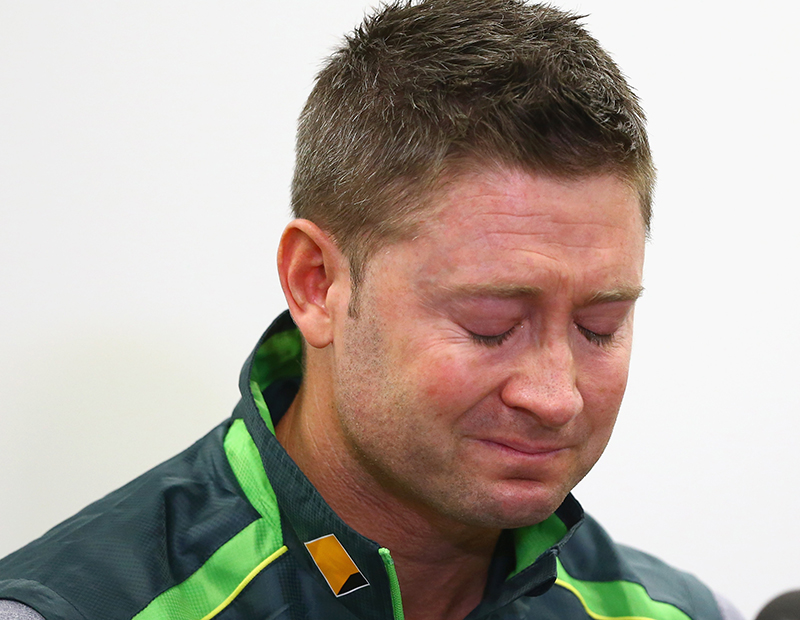 An emotional Michael Clarke has paid tribute to deceased team-mate Phillip Hughes, saying no-one epitomised the spirit of the Baggy Green more than the 25-year-old batsman.

Clarke was speaking on behalf of his team-mates following Hughes’s death on Thursday after he was felled by a bouncer at the Sydney Cricket Ground and died in St Vincent’s Hospital from a severe head injury.

“Words cannot express the loss we all feel as a team right now. To Greg, Virginia, Jason and Megan [Hughes], we share in the deep pain that you’re feeling,” Clarke said.

“Apart from when he was home on the farm with his beloved cattle, Hughesy was at his happiest playing cricket for his country with his mates.

Our dressing room will never be the same. We loved him, and always will.

“Things were always put into perspective when Hughes said ‘where else would you rather be, boys, but playing cricket for your country?’

“We are going to miss that cheeky grin, and that twinkle in his eye. He epitomised what the Baggy Green is about and what it means to us all.”

“The world lost one of its great blokes this week and we are all poorer for it. Our promise to Hughes’s family is that we will do everything we can to honour his memory.

“Last night I asked Cricket Australia if Hughes’s Australian one-day international shirt number, 64, could be retired, to which they agreed. That means so much.

“His legacy of trying to improve each and every day will drive us for the rest of our lives. We’d like to thank everyone, both here and overseas, for the touching tributes to Hughesy in recent days.

“Our dressing room will never be the same. We loved him, and always will. Rest in peace.”

Before reading the prepared piece on Saturday in Sydney, the emotional captain told the huge gathering of media: “I’ll do my best, guys.”

And that he did, delivering the heartwrenching statement in which he promised the Australian cricket side would do everything they could to honour Hughes’ memory.

From the moment he walked into the room at the SCG, the pain was visibly etched across his face.

He bowed his head as his eyes filled with tears before taking another deep breath and beginning.

Hughes was not just a colleague to him but a close friend, whom he had mentored and guided into the NSW and Test teams over the years.

The 33-year-old had been a near-constant presence at Sydney’s St Vincent’s Hospital where doctors had fought to save Hughes’ life.

It was Clarke who read a statement on Thursday on behalf of Hughes’ devastated family after the left-hander’s death was announced.

He walked away then overcome by emotion.

Doubt still remains over whether the first Test between Australia and India will go ahead as scheduled as players grieve over the loss of their team-mate and close friend.

The players attended a sombre gathering at the SCG on Thursday night to reflect on the loss of their mate who had played 26 Tests for Australia.

Hughes’s father Greg said his son would have liked the Test – scheduled to start on December 4 in Brisbane – to go on, but Cricket Australia insisted Test cricket would only continue when the players were ready.