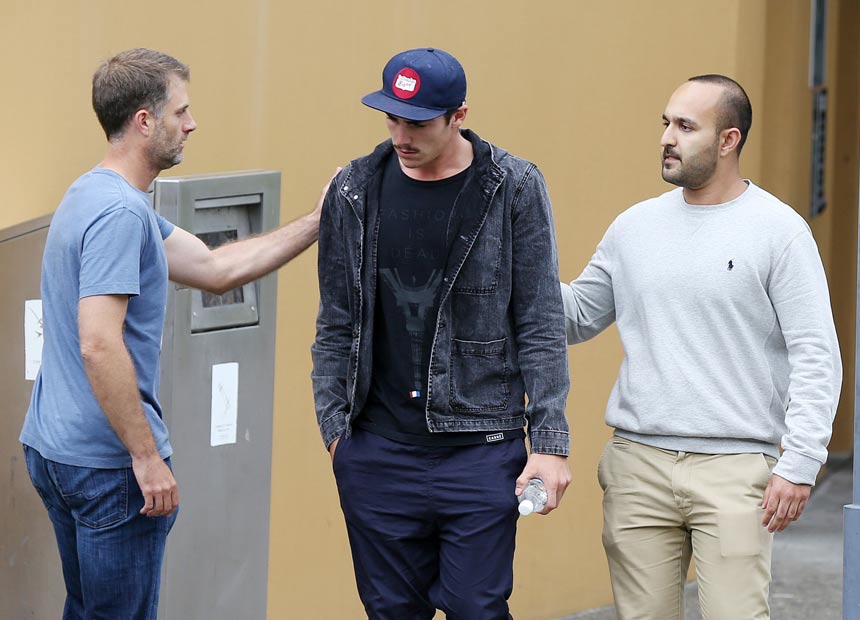 As Australia mourns the loss of bright cricketing star Phillip Hughes, high profile community members have called for people to also spare a thought for another young man tragically implicated in his death.

Sean Abbott, the 22-year-old New South Wales bowler who delivered the ball that felled Hughes, has received an outpouring of support and reassurance following Hughes’ tragic death on Thursday.

• Phillip Hughes: how a brave cricketer died
• Why we’ve lost much more than a cricketer
• In pictures: Phillip Hughes, a life cut short
• How the boy from Macksville made the big time

Abbott was said to be “distraught” after delivering the bouncer that felled Hughes with a fatal blow to the side of his head.

The young fast bowler has been a regular fixture at St. Vincent’s Hospital in Sydney where Hughes was being treated, and was seen leaving in tears on Thursday after learning of his passing.

According to a Fairfax media report, Hughes’ family and teammates have made it clear they hold no animosity towards Abbott.

“When he came to the hospital yesterday, Michael Clarke came down and spent a significant amount of time with him. Phillip’s sister, Megan, also came and deliberately spent time with Sean,” Australian team doctor Dr Peter Brukner said.

“Obviously what Sean has gone through is an incredibly traumatic experience, as it has been for everyone present on the field that day.

“Sean is receiving all possible support from Cricket NSW and Cricket Australia.”

The 22-year-old had a naturally quiet temperament but appeared okay, with at least three supporters always around him, Clark said.

“(But) I think it will be the hardest for him when it’s quiet and there’s nothing happening,” Clark told Sky Sports Radio.

“When he’s sitting at home at night before he goes to bed – that’s, I think, when the thoughts will start recurring in his mind.”

“That lad is absolutely shaken and broken at the moment,” he told Fox Sports.

While the cricket fraternity had rallied around the young bowler, former Australian captain Mark Taylor said Abbott would be haunted by the tragic accident.

“He’s got no questions to answer but I’m sure he’ll be feeling some guilt today and probably will be for a long time,” he said.

“I really hope Sean can get over it and we one day see Sean back playing for NSW and maybe Australia.”

Prominent figures at home and overseas have also taken to Twitter in a show of solidarity for Abbott during an incredibly difficult time.

“Also thoughts with Sean Abbott. I hope he is rallied behind and supported,” Australian cyclist Anna Meares tweeted.

Members of the public have also been quick to reassure Abbott that Hughes’ death is “not his fault”.

My heart goes out to Sean Abbott. Nothing he could’ve done to prevent it.

To Sean Abbott: Absolutely NO ONE blames you mate. We know you’re hurting as much as everyone else who loves this game. Stay strong.

Despite the support, there are concerns the tragic incident may mark the end of Abbott’s short career.

“I know what Sean is going through,” Lawrence told BBC Radio 5 live.

“My thoughts go out to him. I don’t think he’ll play cricket again.”

Outpouring of support for Abbott