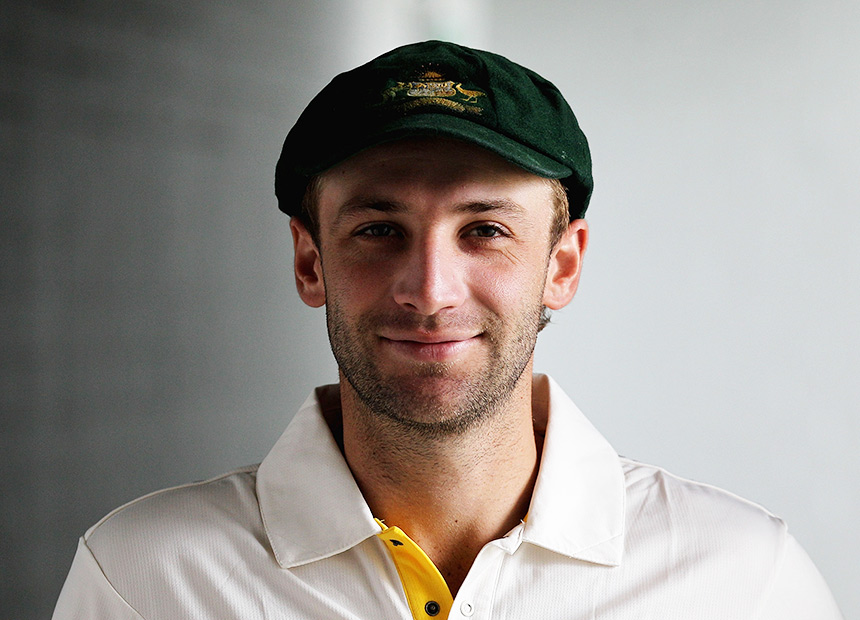 Phillip Hughes tucked the second-last ball he ever faced away for two.

If he had dawdled through for a single, or hustled for three, he would still be here.

That’s the difference between life and death.

The last ball he faced hit him on the neck, just under the left ear.

The bitter irony is that, if it had climbed a little higher and hit him on the helmet, he would still be here.

That’s the difference between life and death.

Instead, on Thursday afternoon at St Vincent’s Hospital in Sydney, Australian cricketer Phillip Joel Hughes died from a massive bleed on the brain surrounded by family and friends.

He would have been 26 on Sunday.

He would have played his 27th Test match next Thursday.

This last, cruelly ironic fact was revealed on Thursday by national selector Mark Waugh, although Hughes was unaware that he had won the battle to regain his place in the national side.

The news of Hughes’ death brought the cricket world to a halt – literally – and it is no overstatement to say that it shocked a nation.

People searched for reasons why.

How else do you make sense where there is none?

How could a batsman with the reflexes of a cat and wearing first-rate protective equipment be struck a blow that would kill him?

People pointed fingers at Ambulance NSW’s response time, debated the efficacy of his helmet and questioned why the bouncer – a delivery designed to hurt and intimidate – is permitted in the game.

Yet the truth is that this was a freak accident, something that the medical experts were at pains to point out.

Hughes had collapsed face forward on the pitch and never regained consciousness.

“If you look in the literature there is only about 100 cases ever reported, so this is incredibly rare with only one previous case ever reported as the result of a cricket ball,” Dr Brukner said.

Dr Tony Grabs, the trauma director at St Vincent’s who removed some of the skull from around Hughes’ brain in an effort to relieve the pressure, said the hospital had never seen the injury before.

The reaction was overwhelming, both in Australia and overseas. Interstate and international rivalries were cast aside as cricket became one big extended family.

A steady flow of present and past Australian cricketers had visited Hughes over the past two days as he lay in an induced coma.

They invariably spoke of the diminutive Hughes, the son of banana farmers from Macksville in northern NSW, as “my little mate”.

Michael Clarke, in perhaps his finest hour as Australian skipper, was an almost constant presence by the bedside of his close friend. After Hughes’ death, he read out a statement on behalf of Hughes’ father Greg, mother Virginia and siblings Megan and Jason.

Dr Brukner paid special tribute to Clarke: “The family was obviously going through a difficult time, but I’m not sure they would have coped without MIchael’s assistance.”

Hughes’ great mate David Warner, one of those who had tended to him after he collapsed, was inconsolable as he left with his arms wrapped around his wife Candice Falzon.

Former Test skippers Ricky Ponting and Steve Waugh were among those to pay their respects.

Prime Minister Tony Abbott said the death of a “young man living out his dreams” had touched millions of Australians.

“The thought that a player in his prime should be killed playing our national game is shocking and sobering.”

He also spoke of the impact on Sean Abbott, the young fast bowler who delivered the inadvertently fatal ball and rushed to Hughes’ aid on the pitch.

Clarke and Hughes’ sister Megan have both spent time consoling Abbott over the past few days.

In an extraordinary gesture, play in the Pakistan-New Zealand Test in Sharjah in the Persian Gulf was abandoned for the day.

Hughes, although not in the Test side, had been there with the Australian squad few weeks ago, running drinks for his teammates and, as he did wherever he went, winning friends with his generous, uncomplaining and unaffected country manner.

India’s tour match in Adelaide was called off to allow grief-stricken players time to mourn.

There were calls for the first Test, due to start in Brisbane next Thursday, to be cancelled, although Cricket Australia said it was too soon after his death to make that call.

Former Australian captain Allan Border said the Test should go ahead, with players given the option of taking compassionate leave, although former Test fast bowler Rodney Hogg wrote in The New Daily that the players were so devastated the game should be abandoned.

Around the country, club cricketers cancelled training and officials pondered whether to go ahead with this weekend’s matches. If they do, there will be more black armbands worn in Australia on Saturday than ever before.

In Hughes’ home town of Macksville, where the batsman returned about a dozen times a year to catch up with old friends, there was a sense of disbelief that their favourite son had been taken in his prime.

“Everyone is beside themselves,” said Nambucca Hotel bar manager Karl Spear. “The town has gone quiet. The streets are empty.”

In India, batting great Sachin Tendulkar, who played with Hughes for the Mumbai Indians, called it a sad day for the game. There were tributes across the cricket crazy country (see the tweet below).

In England, former batsman Nick Compton, who played with Hughes at Middlesex, tweeted: “Cuz I miss you so much, never has someone had such an impact on my life, my career, my outlook. devasted and upset. Love you bro.”

In South Africa, captain AB de Villiers said he was heartbroken. Dale Steyn said he was “totally saddened by the passing of our cricket brother and friend”.

Australian coach Darren Lehmann tweeted: “RIP you little champ, we are all going to miss you!”

Adam Gilchrist’s response was visceral. “No no no no no. RIP Phillip Hughes. And stay strong Sean Abbott.”

Former Test spinner and broadcaster Kerry O’Keeffe managed to inject some humour without hitting a jarring note, referring to Hughes’ famously homespun technique, which involved flaying the bowling square through the off-side.

Two local cricket teams observe a moment of silence for Phillip Hughes before their match in Kolkata. #cricketfamily pic.twitter.com/5qSDO1tlCK

Making sense of the senseless