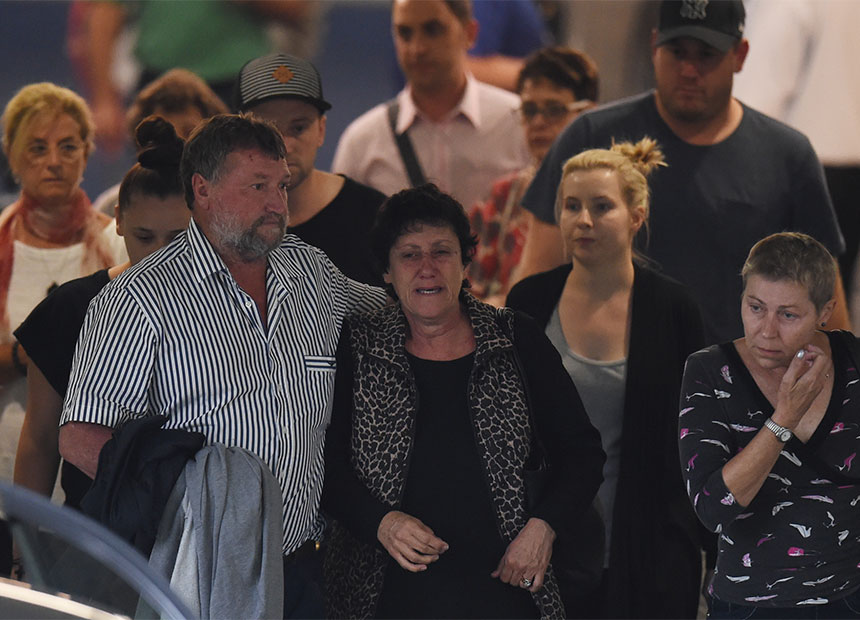 Australian Test captain Michael Clarke began the outpouring of grief over the death of his friend and teammate Phillip Hughes when he fronted a press conference on behalf of the dead cricketer’s family, telling the world they were “devastated by the loss of our much-loved son Phillip”.

Reading from a prepared statement at Sydney’s St Vincent’s Hospital, an emotional Clarke said on behalf of the Hughes’ family: “Cricket was part of his life and we shared that with him.”

“It’s been a very difficult few days and we appreciate all the support we have received from family, friends, players, Cricket Australia, St Vincent’s Hospital and the general public.

“We’d like to thank the nursing staff and Cricket NSW for their efforts with Phillip.”

“Phil has been taken away from us to soon,” Sutherland said.

“It’s an understatement to say we’re completely devastated. The impact of Phillip’s loss is enormous.

“He will forever be remembered as one of the elite few to have worn the baggy green cap, cap number 408.

“In the darkest hours, cricket puts its collective arms around the Hughes family.

“We offer our love and endless support.”

One by one Australia’s cricketing elite filed out of St Vincent’s Hospital, unable to hold back their grief after saying their last goodbyes to Hughes.

David Warner, who opens the batting for Australia, could not hide his emotions as he left the facility with his arms wrapped around his wife Candice Falzon, flanked by Victorian wicketkeeper Matthew Wade.

Warner was on the field when Hughes collapsed at the SCG, one of the first to cradle him in his most vulnerable moment and one of the last to leave his bedside.

He was one of over 100 people to visit Hughes in the last 48 hours of the young batsman’s life.

Mitchell Starc was comforted by his girlfriend, Australian cricketer Alyssa Healy, but he could not hold back a stream of tears as they exited the hospital on Thursday afternoon.

Steve Waugh and Hughes’ family friend and commentator Alan Jones were stoney-faced as they departed.

Over the next few days the Australian cricketing community will rally together to make sure Hughes’ family, teammates, opponents and friends are supported as they grapple with their despair.

So much of the focus will be on Sean Abbott, the NSW paceman who delivered the ball that hit Hughes.

Shortly after the news of Hughes’ death trickled through, Abbott emerged, his eyes bloodshot, Simon Katich placing a hand on his shoulder.

Abbott returned to the NSW Cricket headquarters at Moore Park – where flags were lowered to half-mast – to receive counselling.

The 22-year-old visited the hospital on Wednesday and Thursday. He spent long periods of time with Clarke and Hughes’ sister Megan.

Elsewhere, prime ministers past and present mourned the passing of the young cricketer.

“The loss of Phillip Hughes is heartbreaking for our country,” wrote Julia Gillard in a tweet. “We grieve for a man who gave his all to the sport he loved.”

“His death is a very sad day for cricket and a heartbreaking day for his family,” he said in a statement.

“For a young life to be cut short playing our national game seems a shocking aberration.”

Opposition Leader Bill Shorten said Hughes brought so much more to the dressing room than a piercing cut shot and prodigious talent.

“He was a much-loved teammate, a country boy made good whose fighting qualities were admired in equal measure by friend and rival,” he said.

Labor frontbencher Chris Bowen tweeted: “Few of us knew him. We all mourn him. A life lost far too soon.”

His colleague Anthony Albanese reflected on his personal connection to the batsman.

“Fond memories of him taking time to give batting tips to my son – a lovely bloke and great cricketer,” he tweeted.

“But today this tragic event brings us an overwhelming feeling of sadness and a coming together to pay tribute to a wonderful young Australian,” she said.

Treasurer Joe Hockey made special mention of Sean Abbott, tweeting: “I join with the nation in offering unqualified support during this desperately difficult time.”

“I think there are moments in this house where all of us are called to order … we all get to have a moment where we really remember what’s important,” she said.

“This is one of those moments.”

“I’m in no mood to talk politics,” he said about the listed matter of public importance.

Hughes, who would have been 26 on Sunday, had his whole life in front of him, Mr Laundy said.

Flags at the SCG and MCG were placed at half-mast and social media was inundated by mourners immediately after Cricket Australia confirmed Hughes’ passing.

“Everyone is in shock,” national selector and ex-Test batsman Mark Waugh told Fox Sports. “He was a great young man and tremendous cricketer.”

Social media reaction to Hughes’s death was immediate and overwhelming.

“RIP you little champ, we are all going to miss you! Love, prayers to all the Hughes family xxxx,” tweeted Australian coach Darren Lehmann, who was among the players, family and friends who kept a bedside vigil for Hughes in Sydney.

“No no no no no. RIP Phillip Hughes. And stay strong Sean Abbott,” Adam Gilchrist posted on Twitter.

“Such terrible news with the passing of Phil Hughes. Our deepest sympathies to his family,” former Test quick Glenn McGrath tweeted.

“A very sad day for the world of cricket. So sorry for Phillip Hughes and his family. Spare a thought for Sean Abbott,” England great Ian Botham posted.

South Africa’s Faf Du Plessis then tweeted: “No man. Shocking news that Phil Hughes has passed away. Cant believe it. Everyone close to him will be in my prayers.”

Sports stars from home and abroad quickly offered their condolences.

“Nothing on the course matters when things like that happen,” said golfing superstar Adam Scott after his poor day one score at the Australian Open in Sydney.

“Waking up to the terrible news about Phil Hughes. Thoughts and prayers are with his family #RIPPhilHughes,” English football legend Robbie Fowler posted.