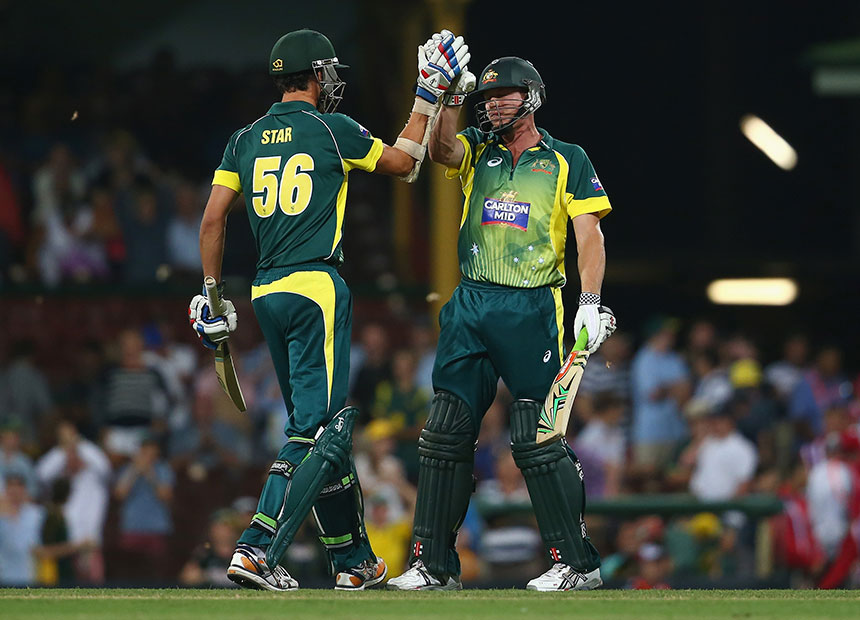 Australia survived a massive scare to scrape home against South Africa  with five balls to spare in an unexpectedly thrilling end to the one-day international at the SCG.

The home side once again relied on the cool head and clean hitting of James Faulkner to see them home, after seemingly having the match in the bag.

Australia were cruising to victory at 3-246 in pursuit of a rain-adjusted target of 275, but lost a staggering 5-21 to be in all sorts of bother.

This included a double wicket maiden to left-arm spinner Robin Peterson in the third last over.

Kyle Abbott was culpable for South Africa, overstepping in the second last over to slightly release the pressure valve, having already bowled Steve Smith off a no-ball earlier in the night.

Australia needed four runs from the final over, with just two wickets in hand, and panic seemed to be spreading through the ranks. It was hard to see where the next run was coming from.

But James Faulkner was on strike. He freed his arms to the first ball of the over and smote Peterson to the square leg boundary to avoid what would have been an embarrassing defeat.

The win gave Australia the series 4-1, returned it to the top of the one-day international rankings and, most important, built momentum in the build -up to the World Cup, which starts in less than three months.

Earlier, a classy 82 from Shane Watson, a superb 76 from opener from Aaron Finch – featuring several spectacular cover drives – and Steve Smith’s 67 looked to have laid the platform for a comfortable victory.

Watson hit two sixes and seven fours to show some timely form with the Test side for the opening match against India in Brisbane on December 4 named on Monday.

But the 33-year-old missed out on a century when he tried to take on Morne Morkel once too often and was caught at deep mid-wicket by Rilee Roussow.

Smith, who hit a match-winning century at the MCG last Friday and an unbeaten 76 in the third match in Canberra, capitalised after being reprieved by Abbott’s no-ball when he was 20.

But it was another excellent all-round display from the Sydneysider, who earlier grabbed the wicket of David Miller and took a fine catch to dismiss Farhann Behardien.

However, Glenn Maxwell, George Bailey and Matthew Wade would not have enhanced their chances by playing reckless shots to put their side in trouble.

An excellent 107 from man-of-the-match Quinton de Kock and some powerful lower-order batting from Behardien (63) helped the Proteas finish on 6-280.

After a strong start the tourists’ middle order struggled against some disciplined bowling, slumping from 2-164 to 5-206 with Pat Cummins continuing his good form with figures of 3-54.

Steve Smith, who was named man-of-the-series, acknowledged that the Australian dressing room was a tense place in the final few overs.

“We were feeling a little bit sick,” he said. “Luckily Jimmy came out and did it for us again.”

‘Finisher’ Faulkner does it again in a close one