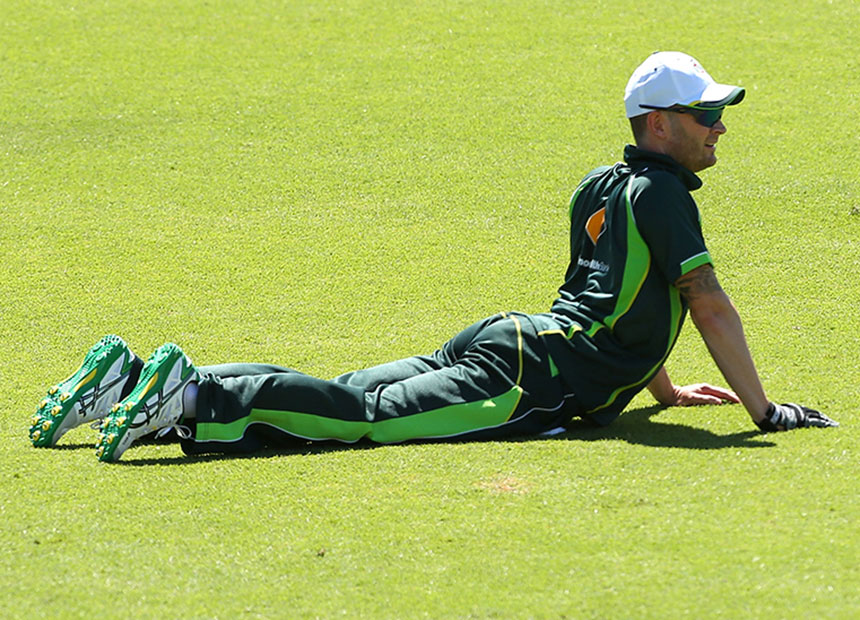 Australian cricket is sending out mixed messages over the state of the national hamstring, the dodgy one that belongs to Australian captain Michael Clarke.

Chairman of selectors Rodney Marsh said on national television on Sunday that he was “backing Michael Clarke to play” in the first Test against India starting at the Gabba on December 4.

Marsh was at pains to play down the latest problem, which forced Clarke out of the one-day side that was beaten by South Africa on Sunday.

“He saw a guy this morning and I’ve never seen a happier doctor on our team,” said a bouyant Marsh, which doesn’t say much for the sense of fun in the Australian dressing room.

Switch on Monday to Pat Howard, who goes by the title “executive general-manager, team performance”, and it was a totally different story.

The way Howard spoke, Clarke appears long odds to put the pads on any time this side of Christmas.

Howard said the board would look at the “long-term and medium-term picture” when assessing Clarke, who may need surgery.

“We are putting the World Cup and Ashes right up there and if he’s right for the Indian Test series so be it,” Howard told Fairfax Media.

“I have talked about the priorities and what they are. Sometimes you have got to take a little bit of a long-term and a medium-term picture.

“If we do this well, we can get extra years out of Michael who is a world-class player, rather than thinking in days and tournaments.”

Clarke has already been ruled out of the remainder of Australia’s best-of-five one-day series against South Africa, which the tourists levelled 1-1 on Sunday, and Howard insists the star batsman would not be rushed back.

“We’ve seen him rushed back (before) and what we’d hate is for him to play a Test or two and then break down,” Howard said.

“Everything is on the table at this point. We saw Nathan Coulter-Nile go through hamstring surgery and come back in eight weeks, so obviously that is one possibility, yes.

“But we are actually going through having a look at all processes at the moment, and making sure we get player buy-in. It’s important that Michael as the patient believes he is assessing all possible options.”

Former Australian fast bowler and The New Daily cricket expert Rodney Hogg has called on the Australian selectors to banish Clarke from one-day cricket in a bid to prolong his Test career.

Should Clarke miss the Tests against India in December and January, Brad Haddin seems the most likely candidate to step up to the captaincy, although the wicketkeeper is facing his own race against time to recover from a shoulder injury.

The next one-dayer is against South Africa is in Canberra on Wednesday.