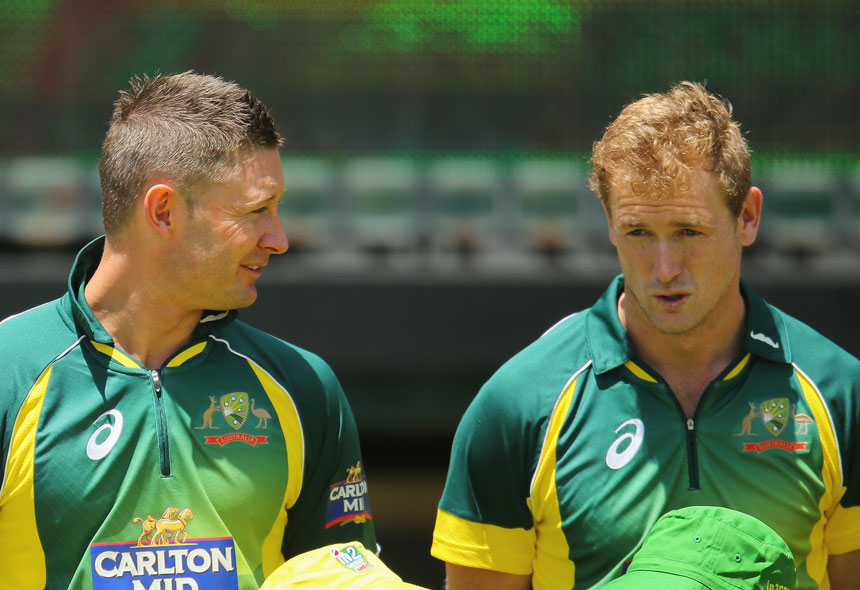 Veteran batsman George Bailey is desperate to have Michael Clarke lead Australia at next year’s World Cup – so much so that he’s willing to massage the skipper himself.

Clarke’s injury woes hit another snag last week when he damaged his left hamstring while batting in a one-day win over South Africa at the WACA.

Although the damage appears minor, the fact Clarke has tweaked his hamstring three times since August is a big concern.

Clarke remains a chance to be fit for the first Test against India, starting on December 4, and the 33-year-old is keen to lead the side at next year’s World Cup.

Bailey has become accustomed to leading the one-day side during Clarke’s various injury layoffs, but the vice-captain would be happy to play second fiddle during the World Cup.

“I’ll be there to massage him, I’ll get him through. He’ll be right,” Bailey said with a laugh.

“It’s big shoes to fill. He’s one of the best batsmen in the world.

“Hopefully whatever Michael’s issues are he can sort them out and come in and have a good run at it.”

Bailey is comfortable with the captaincy role – for the most part.

“All it normally affects is my fielding,” Bailey said.

“I tend to be away with the fairies thinking about who I’m bringing on next or what field placement, and forget I actually have to field the ball.”

Clarke’s absence was telling on Sunday as Australia’s batting line-up wilted in a three-wicket loss to South Africa at the WACA Ground.

All-rounder Mitch Marsh top-scored with 67, but he was a lone ranger as Australia were skittled for 154.

South Africa reached the victory target with 134 balls to spare, with the series now locked at 1-1 heading into Wednesday’s clash in Canberra.

“I think guys are really disappointed for him because you know how hard he works,” Bailey said.

“But you always know on the flip side it’s part and parcel of the game.

“I’m sure there will be guys thinking of Michael and checking on him and seeing how he’s going, but the nature of the beast is the summer rolls on and we’ve got to move on pretty quickly.”

Why Bailey wants to get his hands on Clarke